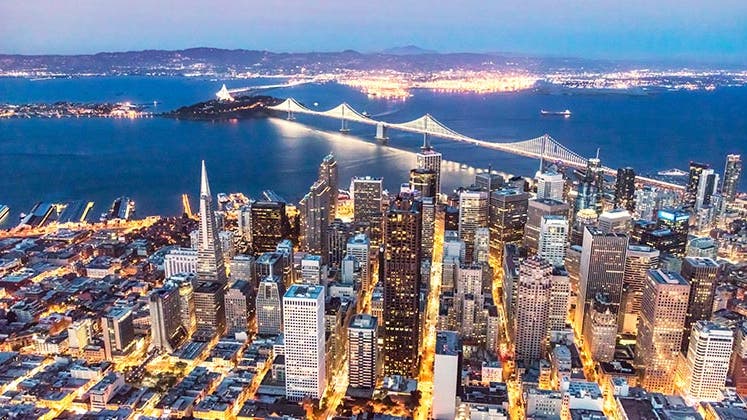 San Francisco first started turning fortune-seekers into fortune-holders during the gold rush days of the 1840s, and the minting of millionaires continues in the city today amid the technology boom resonating out of nearby Silicon Valley. San Francisco’s surging property values, healthy job market and soaring executive paychecks make it the best big city in America for building wealth, a new Bankrate study finds.

“I think there are a lot of attractive things about living in San Francisco, one of those things obviously being its booming economy for a lot of different people,” says Ashley Pellouchoud, a San Francisco attorney.

But don’t pack your bags for the City by the Bay just yet.

Other cities near the top of our ranking may seem more accessible — places like Detroit, St. Louis and Minneapolis.

So how did so many cities that aren’t exactly known as millionaire factories make it to the top of our list?

The answer comes down to understanding how the average U.S. household builds wealth — and why that matters.

*Analysis showed a negative average savable income for the Miami metro area. This may be attributable to the high population of retirees in the area. You might expect those who are retired to be spending more than their income as they spend through their retirement savings.

RATE SEARCH: Shop for the best high-yield CDs as part of your wealth-building plan.

Wealth is a big deal

Ask most Americans what their annual income is, and there’s a good chance they’ll have an answer ready. But ask them about their net worth, and they may have to get back to you. Bankrate has a cool calculator to help you see what you’re worth.

Yes, adding up all your assets like stocks and home equity, and subtracting your liabilities, like mortgages and credit card debt, isn’t something most of us do very often. But despite the lack of attention it gets on a day-to-day basis, household wealth has a huge impact on our financial well-being, says Diana Elliott, a senior research associate at the Urban Institute.

“It’s the ability to transfer some wealth and security to the next generation, and also to invest in one’s self,” Elliott says.

Those investments can include things like having money for a down payment to buy a house or finance your education. Wealth also can smooth out rough patches in your household income and expenses, Elliott says.

“What if your car breaks down? Do you have some wealth where you can repair that car, where you can purchase a new one if you need to?” Elliott says.

The stress of not having that cushion can have far-reaching implications that can even extend to your physical well-being, says Sheng Guo, an economics instructor and researcher at Florida International University.

“There’s this feedback loop from wealth to health,” Guo says. “If you have little wealth, then uncertainty about what will happen to your household — to your kids, to yourself — will actually put a drag on your own health.”

A number of factors influence how quickly and effectively a household can build its wealth, and many hinge on geography.

Take real estate. While there’s no doubt in a post-crisis world that housing has its risks, “a home is where most Americans hold their wealth, so it’s incredibly important for wealth-building,” says Elliott.

“Potential retirees count on home equity as a source of retirement money” and parents “will often tap into that home equity to help fund their children’s college aspirations” she says.

Unfortunately, some of the cities we studied have homeownership rates south of 60%, often because scarce land and other issues have driven real estate prices so high they’re unaffordable for large swaths of the population.

“There’s a big variation in the housing markets across the United States,” says FIU’s Guo.

Still, a home isn’t the only way to build wealth. With San Francisco’s homeownership rate at only 53%, nearly half the city’s residents don’t have access to building wealth through home equity. But their incomes are so much higher, on average, compared with people in other cities that they may have more left over each month to put into savings and investment.

“Some metropolitan areas have seen different rates of growth than others. A lot of that depends on the industries and what’s there to support the workers within that city,” says the Urban Institute’s Elliott.

What makes your city a good or bad place to build wealth?

Countless factors influence household wealth-building, from “social capital” — basically a scientific term for the value of your social network — to the way decision-makers handle their money day-to-day.

We focused on some specific, significant factors that can be shaped by the area where you live.

Here’s a breakdown of the categories we looked at, and where we got the data.

The value of your skills, knowledge and experience. Some cities help residents maximize this more than others.

How easily and cheaply residents can access critical financial services such as retirement accounts, mortgages and auto loans.

This is the 2nd year in a row we’ve done the study, and some cities, including Detroit and Washington, D.C., have again made it into the top cities, while others have fallen out. One theme remains: Just because a city is productive or wealthy overall doesn’t necessarily mean that it gives the average household the tools it needs to get ahead financially.

The New York metro area — a place that many people think of as a great place to build wealth, and where you’re likely to make a higher salary than the rest of the country — didn’t make our top 5 this year, thanks, in part, to the difficulty of buying a home there and lack of access to workplace retirement plans for many workers.

A complicated picture on the ground

While the data can give us one view of how easy or hard it is to build wealth in a city, it may be difficult to get a complete picture.

Take San Francisco. It’s definitely possible to get ahead financially in the city — but it also can be complicated.

“It matters who you are and what job you have,” says Shane Daley, a game developer working in the area’s booming tech sector. That’s where many of the best jobs are.

“It’s not a good place for service workers,” Daley says. “Anyone who works at Uber — as a driver, not in the headquarters — you talk to them and they always commute from an hour away.”

That’s a trend he expects will continue: a high cost of living driving people out of the San Francisco metro area altogether.

“Pretty much everyone who works as a waiter or any job that pays less than $20 an hour doesn’t live within an hour range of here,” Daley says, and even teachers and firefighters can seldom afford to live in the city.

Rents are growing astronomically as more people relocate to San Francisco for high-paying tech jobs and few new homes are being built compared with the number of people moving in, he says.

Play to your city’s strengths

So what does this mean for you, especially if you don’t live in San Francisco? You’ll want to tailor your approach to wealth-building to your area.

If home values are so high where you live that homeownership in the near term is out of the question, it may make sense to put more money into a tax-advantaged retirement account. If it’s hard to find an employer who offers a work-based retirement plan, opening your own IRA and saving that way may make the most sense.

Guo also notes that having credit lines open and available can help families weather shocks, such as a loss of income, in a way that’s similar to having wealth.

“Households optimize on these different forms of resources, and that’s what we’re trying to educate people to do,” he says.