Americans are cutting back to boost their savings.

With more than 60 percent of Americans unable to cover a $1,000 emergency with savings, it’s good news that some are willing to sacrifice to start building cushions for the future.

“Americans know they are undersaved – whether for emergencies, retirement or both – but only 24 percent of households are consciously limiting their spending in order to save more,” says Greg McBride, CFA, Bankrate’s chief financial analyst.

Why people are limiting spending 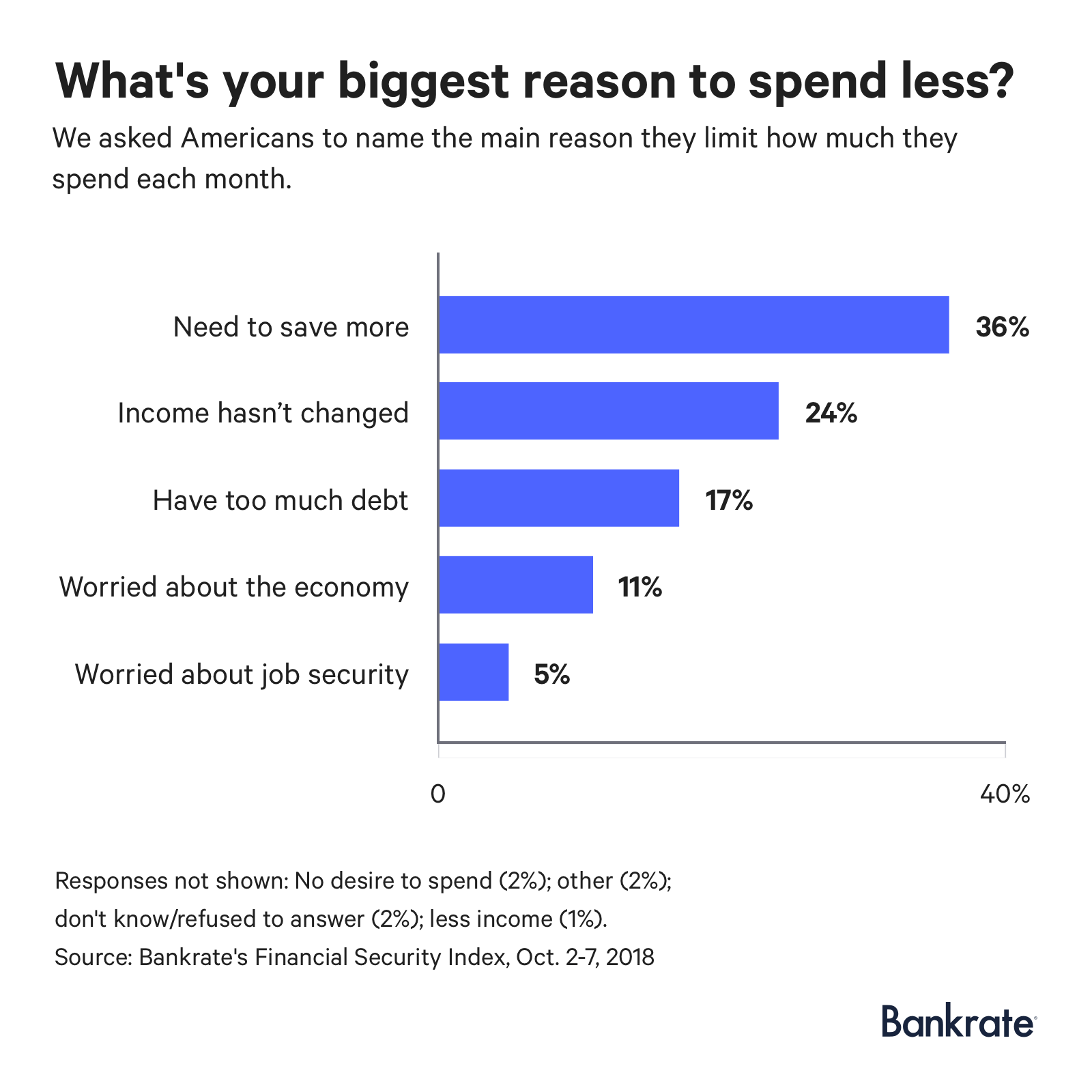 Meanwhile, households with income under $30,000 per year had the highest likelihood (13 percent) of citing their worries about the economy as the top reason for limiting spending.

Younger Americans are the most dedicated to saving

Younger Americans are prioritizing saving more than their older counterparts. Almost half of millennials (46 percent) who are cutting back on their spending are doing it so they can save more; 41 percent of Gen Xers said the same.

Experts recommend having at least six months’ worth of expenses saved in case of an emergency. And while most Americans are far from that, starting small and gradually building a healthy rainy-day fund will pay off in the long run.

To do so, McBride says cutting back on spending combined with increasing income is most effective. Cutting back on expenses is easier than picking up another job, but combining the two will boost your progress.

In contrast, older Americans aren’t showing the same dedication to saving. Stagnant income was the top response for baby boomers (34 percent) and the Silent Generation (49 percent).

For a generation that is still working, flat-lining wages brings concern. In 2017, the labor force of Americans ages 55 and up accounted for about 23 percent of the average annual labor force. By 2024, the Bureau of Labor Statistics estimates that percentage will increase to almost 25 percent.

McBride says boomers are facing different income growth than they experienced before the Great Recession. Additionally, employers are cost-conscious and more willing to hire lower-cost employees at the expense of older, higher-paid ones.

As a result, boomers are cutting back to keep up.

“A lot of (boomers) may have been envisioning living a good life or higher lifestyle,” McBride says. “They’re not able to do that because their income hasn’t increased as they expected it would.”

Now is the time to get serious about paying down debt

Aside from the need to save more and stagnant incomes, the survey finds that 17 percent of Americans are cutting their spending because they have too much debt — a higher response than last year, when only 13 percent of respondents said the same.

Millennials led the way with 23 percent citing debt as the main reason for limiting spending. Only 13 percent of Generation X, baby boomers and the Silent Generation are cutting back spending because of debt.

As interest rates rise, now is a key time to stop adding to debt and prioritize paying it off. The Federal Reserve has increased interest rates three times this year and likely will raise rates again in December. Credit card interest rates will synchronously rise, making debt more expensive to carry.

Americans know they are undersaved – whether for emergencies, retirement or both – but only 24 percent of households are consciously limiting their spending in order to save more.

Cutting back on spending to pay off that debt can be difficult, but there is a wealth of resources available to help.

Starting with a budget can help. After subtracting fixed monthly expenses (like rent or a car payment) from income, allocating funds to variable expense categories (such as food and entertainment costs) will give a clearer picture of how much you should be spending each month. Experts recommend taking a monthly average of variable costs to determine how much you’ll need to budget for; after, evaluate the categories and see where you can cut costs.

Budget apps, like Mint, aim to make sticking to a budget easier through push notifications, emails and visuals. These tools can be used as accountability measures, which is half the battle when it comes to spending more money than you should.

Aside from pulling back on spending, Americans with good credit should consider a 0 percent interest or other low-rate balance transfer card offers to help cut down their debt. After, McBride says Americans should consider contributing “every dime” possible to the debt. After lowering spending, consider setting up automatic transfers to that balance each paycheck; it’ll help with sticking to a solid payoff plan.

“The unemployment rate is the lowest it’s been in almost 50 years,” McBride says. “The economic environment isn’t going to get any better than it is now. It’s time to make hay while the sun shines.”

This study was conducted for Bankrate via landline and cellphone by SSRS on its Omnibus survey platform. Interviews were conducted from Oct. 2-7, 2018, among a sample of 1,017 respondents. The margin of error is +/- 3.72 percent for total respondents at the 95 percent confidence level. SSRS Omnibus is a national, weekly, dual-frame bilingual telephone survey. All SSRS Omnibus data are weighted to represent the target population.