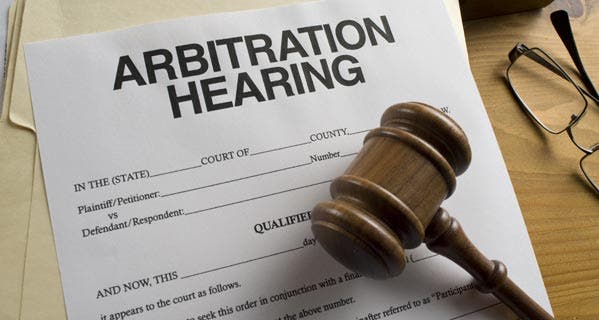 Not a lot of people know this, but if you have a dispute with your bank, there’s a good chance your account agreement prevents you from suing it or joining a class-action lawsuit against it. Instead, you’ll have to plead your case to an arbitrator chosen by the bank.

This week, the CFPB released new research showing that banks’ practice of forcing customers into binding arbitration has a wide range of downsides for consumers. The next step for the CFPB may be to use the findings to come up with new rules for banks that restrict how and when they can require customers to use arbitration.

Snippets of legalese known as arbitration clauses that restrict consumers from suing companies, and instead direct disputes to private arbitrators have become an increasingly standard part of the legal agreements that consumers have to agree to, to get credit cards, checking accounts, prepaid cards and other financial products.

The exhaustive 700+ page CFPB report shows that arbitration clauses have a broad range of negative consequences for consumers.

“(Arbitration) is, effectively in many cases, a way to squelch claims,” says David Seligman, staff attorney at the National Consumer Law Center. Looking at the CFPB data, the number of arbitration claims filed is “shockingly small” when you consider that the industries in question affect tens of millions of people, Seligman says.

In fact, in the period the CFPB studied, there was an average of only 33 cases per year involving amounts of $1,000 or less nationwide.

“The consumers in those industries, often very low-income consumers, who are the victims of predatory action, don’t have the resources and the time to go and pursue a claim individually, they’re never going to get relief,” Seligman says.

They confuse consumers. In surveys conducted by the CFPB for the report, relatively few customers understood what arbitration was, whether they were subject to it and how it works in practice.

They don’t lead to lower prices. The big selling point for arbitration has always been that reducing legal costs by blocking customer lawsuits would result in lower prices for consumers. But that hasn’t been the case, according to the report.

The results of the study may set the stage for the CFPB putting limitations on when banks and other financial institutions can shunt customers into binding arbitration.

“In our governing statute, Congress specified that the results of this arbitration study are to provide the basis for important policy decisions that the Consumer Bureau will have to make in this area,” CFPB director Richard Cordray said in a statement, coinciding with the release of the report. “So people are right to be interested in digesting these results and considering how we intend to fulfill the objectives established by Congress. ”

What do you think? Do you like the idea of going to a private arbitrator to resolve a dispute with your bank or would you rather be able to file a lawsuit in court or join a class action?