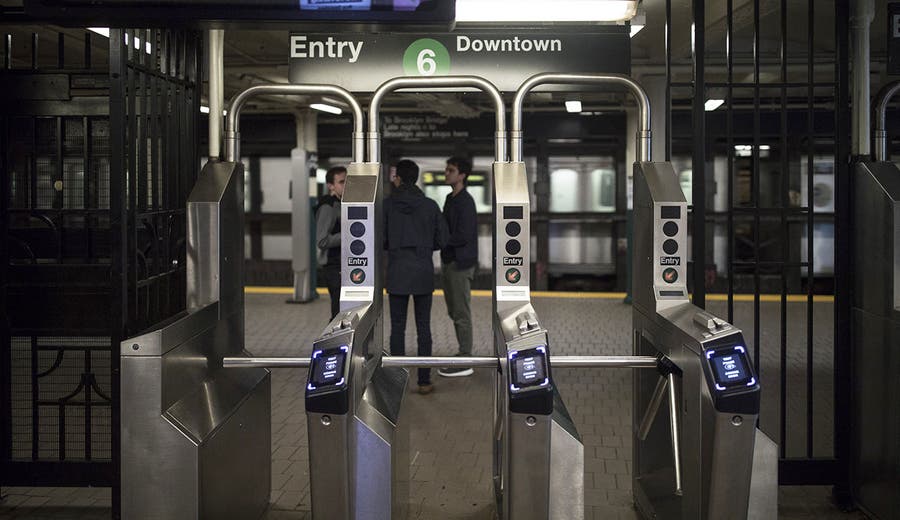 Certain New York City subway and bus passengers can now pay their fares by tapping a smartphone, credit card or debit card on the turnstile. I was really excited to try this out for the first time, and as you can see, it went great!

Way better than the old method of waiting for a vending machine, loading money onto a magnetic stripe MetroCard and swiping (usually several times) to get through the barricade.

I’ve always viewed mobile payments as a solution in search of a problem. Pulling my phone out of one pocket is no faster than pulling my wallet out of another. And mobile payments are harder for me to execute. Every time, I stress over where to hold the phone, how to select the right card and how to authenticate with my thumbprint. Oh, and does my phone have sufficient battery life? (Often it does not.)

Of course, different people have different opinions. Consumer choice is a good thing, and if a payment terminal can accept a tap from a card, it can also accept a tap from a phone. A.T. Kearney, a consulting firm, reports 70 percent of U.S. payment terminals are equipped with the necessary hardware to process these transactions. Visa adds that this includes 80 of their 100 largest merchants (by transaction volume).

While retailers generally have the right technology, it’s a different story among consumers. A mere 5 percent of U.S. credit cards were contactless at the start of this year, per A.T. Kearney, and these were used in fewer than 1 percent of transactions. That should change rapidly, thanks to rollouts from major issuers such as Chase, American Express and Capital One. Visa projects 100 million of its U.S. cards will be contactless by the end of this year, and a whopping 300 million will be contactless by the end of 2020.

To find out if you already have one, take a look at your card. If you see something that looks like a sideways Wi-Fi symbol, you have a contactless card. Rather than sending all of their customers new cards all at once – because that’s expensive – most issuers are sending them out piecemeal as existing cards expire. You can call your card company to request a contactless card sooner. I recently called Chase and American Express and had new cards in my mailbox within a week.

Contactless payments are just as secure as dipping a chip-enabled card into a reader. They utilize the same tokenization methods, which means stolen info is essentially just an expired password. Science-fiction scenarios, such as a criminal stealing your card info via radio waves are myths. The main advantage of going contactless is speed. Transactions process in about a second, rather than the 15-30 seconds it often takes to dip a card into a payment terminal and wait for it to process.

This makes contactless technology ideal for transit, fast food, groceries, pharmacies … pretty much anywhere we like to get in and out quickly. It should also further the transition from cash to digital payment methods. A Summer 2018 survey commissioned by our sister site, CreditCards.com found the number one reason credit cardholders avoided using their cards for purchases under $10 was because it’s easier or quicker to use other payment methods.

As you can see with my experience, it doesn’t get much easier or quicker than contactless.

Ted Rossman is the industry analyst and columnist at Bankrate.com and CreditCards.com. He has been interviewed by hundreds of media outlets, including the Wall Street Journal, Forbes, NBC Nightly News, CBS News, CNBC and Fox Business. Ted also writes the “Wealth and Wants” column for CreditCards.com, which focuses on cash back cards. He previously spent seven years as a member of the award-winning communications department at CreditCards.com and its sister sites, The Points Guy and Bankrate.