Everyone who has visited a bank branch in recent years has probably experienced bank personnel trying to upsell them on other services.

“You want to make a withdrawal from your checking account? That’s great. How about a credit card?”

But sometimes bank upselling can go horribly wrong, as it did for Frank Ahn, a small-business owner in Venice Beach, California, who eventually ended up with 20 Wells Fargo accounts due to practices of Wells Fargo staff.

Ahn was not alone, regulators say.

On Thursday, representatives of the Office of the Comptroller of the Currency, Consumer Financial Protection Bureau and the Los Angeles City Attorney announced a civil action and related settlement with the bank over allegations that it went too far in encouraging employees to upsell customers, then failed to monitor them closely enough to prevent misconduct.

According to the CFPB, that misconduct was rampant, and Wells Fargo employees engaged in practices that often crossed the line from aggressive to illegal, including:

An analysis by the bank found that employees had signed up consumers for more than 2 million unauthorized deposit and credit card accounts, the CFPB said.

Under the terms of the settlement, the bank, which is the third-largest in the U.S. by assets, will pay a total of $185 million in fines and penalties to the CFPB, the City and County of Los Angeles and the OCC.

“Wells Fargo employees secretly opened unauthorized accounts to hit sales targets and receive bonuses,” said CFPB Director Richard Cordray. “Because of the severity of these violations, Wells Fargo is paying the largest penalty the CFPB has ever imposed. Today’s action should serve notice to the entire industry that financial incentive programs, if not monitored carefully, carry serious risks that can have serious legal consequences.”

The bank says it has taken steps to hold managers and employees accountable, and pledged to prevent future misconduct. The company said it fired 5,300 employees in connection with the case.

“Wells Fargo is committed to putting our customers’ interests first 100 percent of the time, and we regret and take responsibility for any instances where customers may have received a product that they did not request,” the company said in a statement.

Some people like Ahn, whose complaint helped launch the inquiry that led to the fine, will get some relief under the order. Wells Fargo has set aside $5 million for affected customers.

In 2011, Ahn, who owns a laundromat, a convenience store and a check-cashing and money services store, was shopping for a bank to use for his businesses and happened into a Wells Fargo in Van Nuys, California. He gave the business banker there his contact information, asked for details on the accounts available and left without signing up for anything. 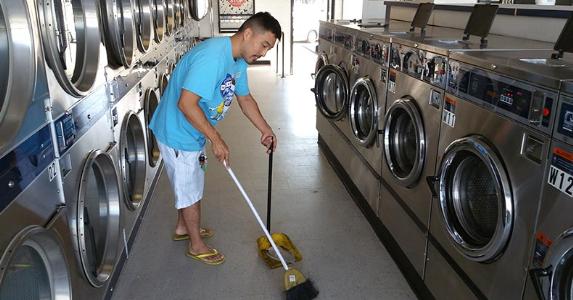 Frank Ahn, a small-business owner in California, ended up with 20 Wells Fargo accounts.

A few days later, Ahn said he got a new debit card and a letter from Wells Fargo thanking him for opening a checking account. Annoyed that he’d been signed up for a checking account without his permission, he called the bank and had the account canceled. In retrospect, perhaps he should have seen that as a warning sign.

Ahn liked the convenience of Wells Fargo branches being so close to his businesses and his home, so he went to the branch closest to his house to get more information. The branch manager there offered him $150 to sign up for an account, but there was a catch: He needed to also sign up for another checking account and a savings account. With his multiple businesses, it made sense to have multiple accounts, so he agreed.

‘Friends’ trying to hit a quota

Aside from a few stray charges on his checking accounts, which the bank reversed, everything was fine. But about a year later, the branch manager began calling Ahn, first offering him a credit card, and then regularly, asking him to open accounts to help her meet her quota.

“They tried to make it seem like they’re my friends,” Ahn said.

She promised the checking accounts would be free as long as he kept them attached to a savings account and kept a small amount of money in them. Ahn refused at first, but she was persistent, and not seeing a downside to a free account and wanting to help the branch manager, who had always been nice to him, Ahn says, he “gave in.” He went in to the branch to sign up for the accounts — a decision, he says, he now regrets.

“I shouldn’t have done it. Looking back, that was my mistake,” Ahn says.

Now with six Wells Fargo accounts to his name, Ahn thought, “As long they don’t give me any fees, I’m cool with it. The cash will be there.”

The next month, though, fees of $10 to $15 started hitting his accounts.

Again and again, Ahn would get the fees reversed with promises they would be stopped, only to see new charges pop up in subsequent months. Now refusing solicitations to open new accounts, he was being signed up for new accounts anyway, and had to deal with constant and sometimes hostile solicitation calls.

“I guess they have to meet quotas or something, because sometimes they would get angry with me,” Ahn says. “One time I did not want a credit card, and they were like, ‘Oh, man, it’s the end of the month. If you ever have fees in the future I’ll get rid of them if you do me this favor.’ And I don’t even know this guy.”

Over the next three years, Ahn says he called to try to get the accounts closed, without success. Wells Fargo representatives would promise to help him, only to leave the accounts, and their fines, in place. In addition to monthly fees, some of the accounts became depleted to the point where they were triggering overdraft fees as well. Ahn was concerned that if he closed the accounts while they had negative balances, his credit would be ruined.

At the peak, Ahn says he had 20 Wells Fargo accounts, each incurring fees regularly, adding up to hundreds of dollars a month, and trying to deal with the mess was a major distraction from running his businesses.

Eventually, Ahn was able to get most of his unneeded accounts closed, including multiple credit card accounts he says he never signed up for. But even after his story was featured on the local news and he reported Wells Fargo to the city attorney’s office in 2015, Ahn has not been refunded all the fees the bank charged.

Ahn says he’s still “very angry” and estimates he paid a total of $10,000 in fees, only some of which have been refunded. He worries about other Wells Fargo customers experiencing the same thing, especially people who speak English as a second language and who may not understand what’s going on.

Contacted for comment on Ahn’s accounts, Mary Eshet, a spokeswoman for Wells Fargo, said the bank couldn’t comment directly on his specific case because of privacy issues.

“Due to our commitment to customer privacy, I can’t share details, but as always we will communicate directly with customers regarding any questions or concerns,” Eshet said, noting that the bank scored the best of any large bank in the University of Michigan’s 2015 Customer Satisfaction Index.

Ahn’s experience has left him jaded about the bank.

“They try to act like they want to help you,” Ahn says. “But they don’t care.

“I actually thought they, you know, were looking out for my best interests, when they’re definitely not,” he says.