Who are the richest nerds? 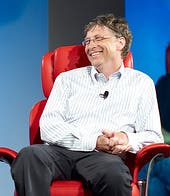 They used to be called “nerds” or “computer geeks,” but now you can call them multibillionaires. And it’s not hard to guess who the richest one is — he also regularly comes in first or second on the yearly lists of the richest in the world: Microsoft founder Bill Gates, of course. His net worth has increased an estimated 9 percent so far this year to a cool $61.3 billion, according to Bloomberg’s Billionaire Index,

Oracle founder Larry Ellison, also no stranger to the list of the rich, is second, with $37.9 billion.

The other top three are familiar names as well, though significantly younger than the top two. No. 3, Mark Zuckerberg, co-founder of Facebook, is 40 years younger than 67-year-old Ellison. Zuckerberg’s net worth is at least $21 billion, but that could be more once his company goes public.

The founders of Google, Larry Page and Sergey Brin, both 38, tie for fourth place, with $18.7 billion each. Now who are the nerds?

But even billionaires aren’t immune to investment losses. The Bloomberg Billionaire Index shows that the 40 richest individuals in the world lost a combined $6.2 billion in one day last week when the market dropped on disappointing earnings results. The index is valued based on market and economic changes at the end of each business day.

Carlos Slim, the Mexican telecommunications tycoon, is still the world’s richest individual, even after losing $572.3 million in one day. His fortune is estimated at $68.8 billion. Gates remains in the No. 2 position, with Warren Buffett coming in at No. 3 with $44.6 billion.