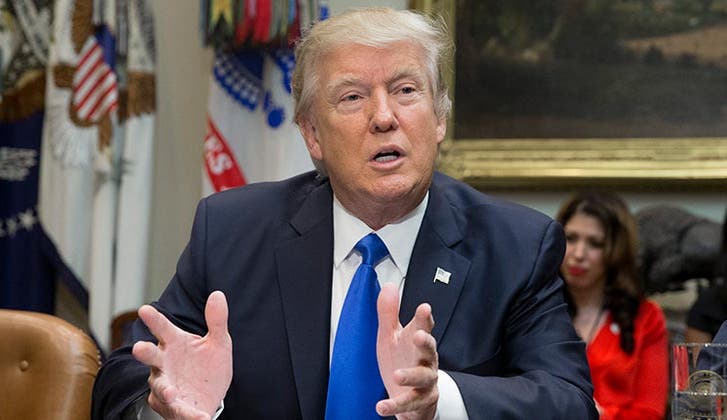 The president signed an executive order calling for a review of the rules under the Dodd-Frank Wall Street Reform and Consumer Protection Act, which was designed to make the banking system robust enough to survive another big economic downturn without fear of a total collapse.

The order directs the secretary of the Treasury to review banking regulations and report back to the president on ways in which they can be eased.

“We expect to be cutting a lot out of Dodd-Frank because frankly, I have so many people, friends of mine that have nice businesses and they can’t borrow money,” Trump said. “They just can’t get any money because the banks just won’t let them borrow it because of the rules and regulations in Dodd-Frank. So we’ll be talking about that in terms of the banking industry.”

RATE SEARCH: Find a safe place for your deposits. Open a CD today.

The move came just days after the president promised to do “a big number” on the signature financial reform legislation approved under the Obama administration.

TheHill.com reports that the “order itself is limited, but Trump will be able to make his mark on the law going forward, primarily by filling out key regulatory positions with his own picks. But more wholesale changes to the overall structure of those rules will likely require help from Congress.”

The Treasury secretary has 120 days to meet with financial regulators and deliver a report to the president outlining what parts of the law work and what parts are problematic.

While Republicans, who have long hated the law, and Wall Street applauded the president’s move, interest groups like the National Consumer Law Center are taking a much dimmer view.

Are we doomed to repeat the 2008 financial crisis? #doddfrank rules were created to protect our economy & public. #DefendCFPB #WallStreet https://t.co/TfwA3e8sLi

CARD SEARCH: You deserve to be rewarded. Apply for a cash-back credit card now.

The sprawling Dodd-Frank law has a half-dozen or more key provisions that have reshaped banking in the last several years, including:

The Consumer Financial Protection Bureau. Consumers may be most familiar with this independent government agency the law created, which was designed to prevent financial institutions from offering predatory products and services that abuse consumers. The CFPB has authored new restrictions on how banks can market and sell their products and returned millions of dollars to consumers. It’s also been criticized for wielding too much regulatory muscle and for having too little accountability to Congress or the president.

The Durbin amendment. This measure set caps on the interchange fees that big banks can charge to merchants when a customer swipes a debit card. This cut big banks’ fee revenue sharply and may have led financial institutions to raise other banking fees that consumers pay directly.

Capital requirements. Banks have to have more money on hand to weather another financial crisis. The Federal Reserve stepped in to aid banks during the financial crisis largely because they didn’t have enough cash in reserve once the value of their mortgage-based assets fell.

Too big to fail. This measure gives the Federal Deposit Insurance Corp. the authority to wind down large financial institutions in lieu of bankruptcy. This is meant to prevent future government bailouts.