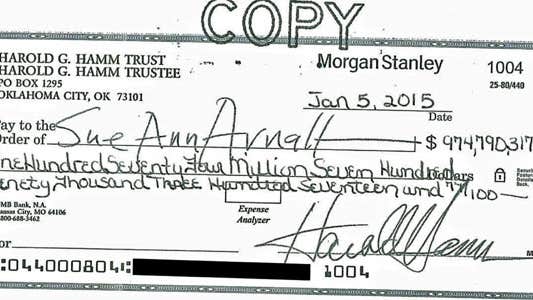 It’s not every day someone writes a personal check (that won’t bounce to high heaven) so large that it won’t fit on a check’s standard lines, but that’s exactly what happened earlier this week.

Billionaire oilman Harold Hamm wrote the check, for exactly $974,790,317.77, to settle a divorce with his ex-wife Sue Ann Arnall, according to a Reuters report. Even more surprising, Arnall initially refused to cash the astoundingly large, hand-written check because it was too small.

Arnall, an economist, lawyer and former executive for Continental Resources, the oil company that made Hamm his billions, had appealed the amount of the settlement, arguing it wasn’t enough given Hamm’s enormous wealth. Hamm is worth more than $20 billion, according to the report, and the couple was married for 26 years, the time in which Hamm built most of his fortune, and have two children together.

Arnall eventually cashed the check, according to a report from CNN Money. One can only imagine what the reaction was at the bank that cashed it.

What would you do with a check that big? Do you think it’s the biggest personal check ever?