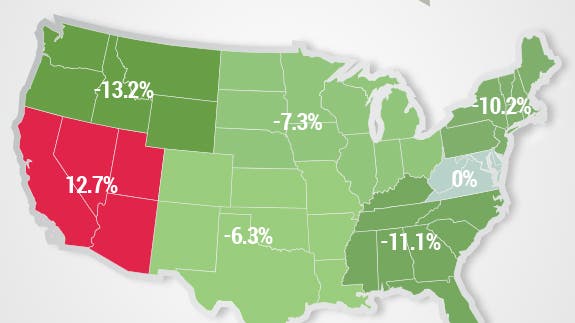 We may be living in a high-tech society of cybercrime and online hacking attacks, but when it comes to trying to steal money, there are still criminals who prefer the good ol’ days of John Dillinger, “Pretty Boy” Floyd and Bonnie and Clyde.

A few years ago, the American Bankers Association started an online service that would allow participating banks to track bank robberies across the country in real time.

The ABA Bank Capture system has been adopted by banks representing about 60 percent of U.S. bank branches. It sends information along to the FBI and to other law enforcement agencies, but it also allows member banks to see the crime problems their colleagues or competitors are having.

“This allows banks to kind of be on alert in their areas,” says Heather Wyson-Constantine of the ABA. “What areas are seeing increases or decreases in crime? What are the days that banks are being robbed most, what time of day, what type of method (of robbery)? … We all need to share this information to stay safe.”

The ABA graciously shared some of the data it has collected recently:

Robberies down overall across the U.S.

One thing the ABA looks at is trends in robberies across regions of the U.S. In recent years, it’s found that robbery rates have been down across the U.S., with the exception of the Southwest.

Stephanie Clarke, chair of the bank security committee with ABA and a senior vice president at KeyBank, says it’s not clear why there’s regional variation, but it could have something to do with such things as highway corridors that allow for easy exits, or drug populations in an area.

Robberies using notes are still the most popular but are waning

Different robbers have different styles of robbing banks. Unlike what is depicted in the movies, the majority of robberies are not with guns blazing, counter jumping or sophisticated multi-man operations where the robbers get in and out without anyone noticing.

In fact, the most common burglary by far is the simple “note” method, where a would-be robber passes a note with demands to a teller.

However, robberies with notes have been on the decline in recent years, while the ABA has seen an upward trend in the percentage of robberies that are takeover robberies — robberies where the criminals, often armed, take over the lobby and demand money.

“I think that the bank robbers know that they’re going to have a quicker reaction and be in and out of there if they perhaps display a weapon,” Clarke says of the rise in takeover robberies, although she said she could not tell for certain why the trends are changing.

Robbery rates vary by time of year, even hour

When robberies happen is certainly something that banks, security agencies, the FBI and even consumers are interested in.

The ABA notes that the number of robberies tends to fluctuate by month and by quarter:

On its website, the FBI shares that robberies are most likely to occur on Fridays, and in the mornings between 9 a.m. and 11 a.m. (The most recent data is from 2011; attempts to get more recent data were not successful as of press time.)

Watching the trends and responding

Bankers say they watch the robbery trends to be on the lookout for any rising issues.

Here are some that are being watched for right now:

An increase in ATM robberies and other ATM crimes: Clarke, of Keybank, says she and the bank security committee are concerned about the rise of robberies of ATMs recently. “There’s a shift of robberies more towards ATMs than actual branches,” she says. “We’re constantly keeping our eyes on the ATMs and making sure we have those protected.”

Wyson-Constantine of the ABA says bank tellers and bank staff are often trained on how to react to a robber and prevent problems, but a consumer alone at an ATM “may not know how to react,” she says, adding that people access ATMs at all hours of the day.

She says banks are implementing better lighting around ATMs and adding cameras to better deter these crimes.

“If you think about the potential losses, historically a bank robber walks away with a certain amount of money that’s usually at the lower end,” Lava says. “The skimming vulnerability has 10, 15, 20 times more risk than with a common bank robber.”

Indeed, a 2012 study by British researchers found that common bank robbery is not very lucrative, with robbers actually being out-earned by bank tellers.

The ATM Industry Association recently conducted a survey that showed members were more concerned about ATM skimming attacks than most other forms of robberies or fraud on ATMs, including cyberattacks.

Different security measures: The ABA Bank Capture system allows banks to compare what nearby bank branches are doing to beef up security.

Clarke says that’s helpful, because if Keybank were to enter a new market, it could see whether nearby competitors’ branches tended to use armed guards or unarmed guards, bulletproof glass or other teller safety measures, or GPS devices or dye packs on money, among other things. The information can help in rating the risk of the branch location.

The point of understanding bank robbery statistics is to reduce the possibility of violence, Lava says.

Clarke cites an example of some of Keybanks’ east coast branches that had experienced some robberies. Keybank used the ABA Bank Capture system to look for similar robberies. The different banks share photos of the suspect with each other and the FBI, and look for areas they think the robber might hit next.

It worked, Clarke says. A person who had robbed multiple branches in the area was arrested in a sting operation.

If you ever find yourself in the middle of a bank robbery, Bankrate has four tips to help you get through it.

What do you think of these stats? Anything surprising?