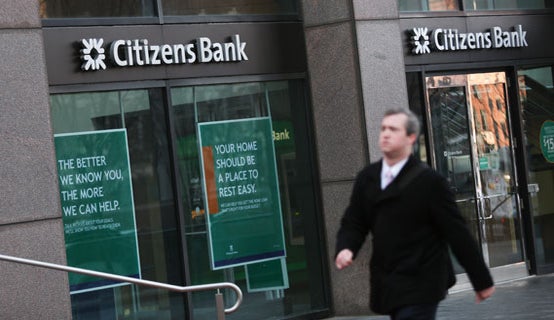 Citizens Bank will pay $35 million in penalties and compensation for victims over charges it — for years — pocketed cash from customers who made errors while depositing money into their checking accounts, the federal government announced Wednesday.

Once a part of the Royal Bank of Scotland, Citizens is now an independent bank with branches in 11 states. The bank’s large size meant that hundreds of thousands of consumers were affected by the unfair deposit policies, which were standard practice across the bank.

Between Jan. 1, 2008, and Nov. 30, 2013, the bank under-credited consumers millions of dollars in deposits, according to the Consumer Financial Protection Bureau, or CFPB.

That means that if you were a Citizens customer during that period, you’ll want to keep an eye out for a check from the bank. Under the terms of the CFPB order, Citizens is required to return $11 million to individual checking account holders who were affected by its misconduct.

It’s pretty much inevitable that checking account holders will occasionally make mistakes when filling out deposit slips, and that banks will sometimes misread deposit slips. Usually, those errors equal out in the end, and the bank maintains that was the case here. But the way Citizens handled those mistakes was unfair to consumers who weren’t on the receiving end of a bank error in their favor, the CFPB found.

When the discrepancy between the amount on a deposit slip and the amount deposited was large, Citizens had a policy of reviewing the deposit and correcting the amount. But when the discrepancy was smaller, below a limit of $50, or later, $25, the bank would do a limited review or no review at all, instead simply taking any additional customer funds and keeping them for itself.

“The bank may have seen these discrepancies as ’rounding errors’ not worth its time to pursue. But that is not sufficient,” said Richard Cordray, director of the CFPB, in prepared remarks. “Even though some customers may have benefited from the policy in different circumstances, that fact did not nullify the harm to others.”

For its part, the bank admits it made mistakes.

“Like many other peer banks, Citizens employed certain practices to ensure the next-day crediting of deposits in situations when deposit slips contained mathematical errors. However, these past practices and disclosures, principally prior to early 2011, could have been better,” the bank said in a press release.

But while this may have been more a case of incompetence than dishonesty, the fact remains the bank happily pocketed the funds, even setting up a system to ensure that customers’ money would make its way into the banks’ own accounts.

According to the CFPB’s order, the service the bank used to process its deposits wouldn’t accept transactions where the amount credited to a consumer’s account was different than the total funds deposited into the bank. Rather than deal with the errors and credit the customers’ accounts correctly, the bank created “substitution tickets” so that any difference could go into the banks’ own general ledger.

This is the first action the CFPB has taken against a bank for illegal practices in its deposit processing, but it may not be the last.

“Any pending investigation or examinations are nonpublic and we cannot discuss them; however, the bureau will continue to be vigilant on this issue, and if we identify additional violations at other institutions, we will take appropriate action,” said Deborah Morris, deputy enforcement director at the CFPB, in a conference call.

What do you think? Have you ever had an error in a deposit that was never resolved?