Are ‘pop-up’ bank branches the future? 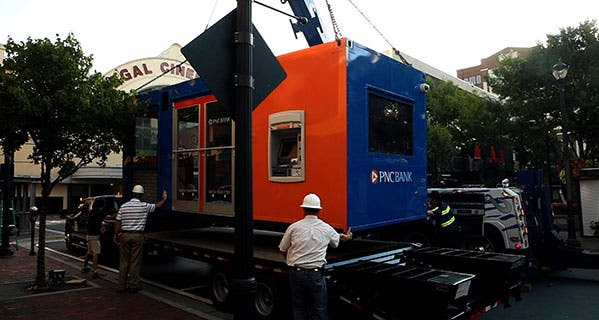 Imagine a food truck, but instead of Korean tacos or barbecue sliders, the truck dispenses cash and financial services. Sure, the latter isn’t as tasty, but banks seem to be leaning increasingly toward so-called “pop-up branches” as a way to serve customers while still reducing their brick-and-mortar branch footprint — and costs.

Bank of America this week filed a patent for a “mobile kiosk for enhanced financial product offerings.” We’ve all seen mobile ATMs set up at concert venues and other events, but these kiosks, which could be stationary or attached to a truck, would be more like branches.

They would have “a robust set of features, like those provided by a banking center” that would allow customers to sign up for new accounts or print a replacement debit card, for example.

The idea here is to go where people congregate, instead of waiting for them to walk by a branch. Some examples of places where the kiosks would be parked:

One way B of A would persuade those venues to let them park there? The kiosks could be programmed to do things for the venues’ owners, such as dispense gift cards in the case of a big-box retailer, or service a company’s 401(k) accounts.

Part of a larger trend?

Other banks have experimented with pop-up branches, some of which are even fully staffed by human beings.

Since 2013, PNC Bank has operated pop-up branches in Atlanta, Chicago and Charlotte that offer most of the services you can get a typical branch, including in-person customer service.

It’s easy to see the potential appeal — rather than having to sink huge amounts of money into building a brick-and-mortar branch and hoping that people show up to bank there, a pop-up branch could be moved to wherever it generates the most customer traffic.

Still, there’s a real psychological benefit to brick-and-mortar locations that a mobile kiosk wouldn’t necessarily replicate. People want to feel that their money will always be there when they need it, and putting branches on wheels probably won’t give them quite the reassuring feeling of permanence.

What do you think? Should banks put branches on wheels?