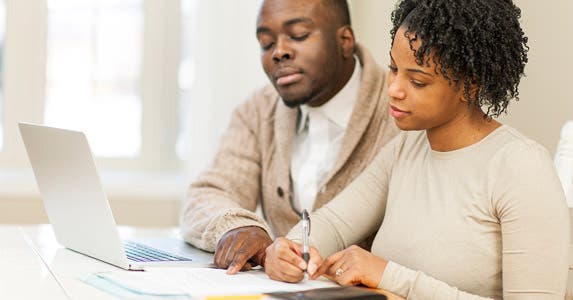 Be prepared to save a few bucks

From the middle class to millionaires, everyone feels a few dollars short of comfort at times. But more money won’t necessarily solve financial difficulties.

Developing strong money management skills can help you use the money you have today to live the life you want. Plus, when your ship does come in — the great job, the winning lottery ticket or the inheritance from rich Uncle Bob — you’ll know how to handle it.

“People need to have a plan for their money,” says Steve Bucci, Bankrate’s debt adviser and author of “Credit Management Kit for Dummies” and co-author of “Managing Your Money All-In-One for Dummies.” “If you don’t have a plan and the other person does have a plan, they’re going to win because they have the discipline, goal and desire and you’re just sort of playing by ear.”

And who is the other person? Marketers, says Bucci, who also authored “Credit Repair Kit for Dummies.”

It’s not your imagination; people are out to get you — or at least your money. Being prepared will help you counter the very real forces out there that want you to spend, spend, spend. 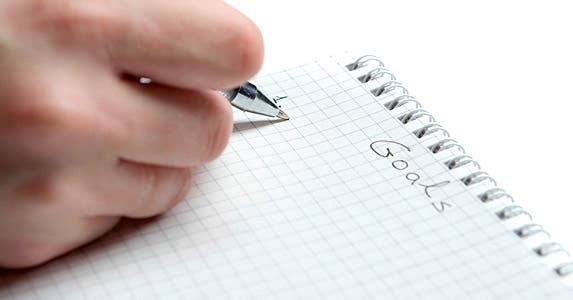 Not all superfluous spending goes to shiny new toys and baubles. Money can be easily frittered away on expensive cable packages or restaurant meals, to name a couple of examples.

Setting goals provides a mechanism for overriding the impulse to buy things that are not as important.

“People don’t often associate spending plans with dreaming, but if you do it right, it’s a key ingredient,” says Bucci.

“You need a reason not to spend on things that don’t matter. You decide that you have a goal in mind that is more important.”

Writing down your goals will help prioritize spending when it comes time to map out your plan. Bucci recommends writing short-term, medium-term and long-term goals on note cards. If you have them, include kids and the significant other in the process.

“You make your choices, but you need to have the dream or the goal and the money, plus knowing that you’re going to be able to put the money aside,” he says. 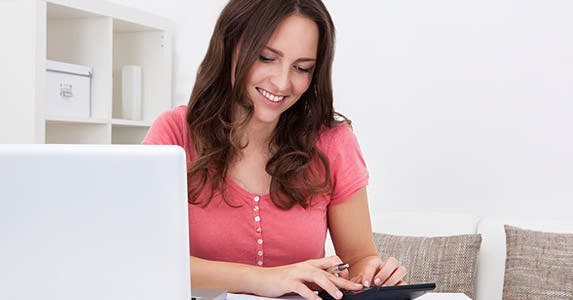 “The only way to plug the leak is to know where the leak is,” says Gail Cunningham, spokeswoman for the National Foundation for Credit Counseling.

Take some time to try to follow every cent spent: the rent payment, the $3.32 latte, the 50-cent newspaper, the 79-cent pack of gum — everything. Don’t judge yourself now or feel angst over purchases.

Almost everyone can usually account for most of their spending with a cursory overview of their finances, says Bucci. “Most people can get to 90 (percent), but the last 10 percent is a killer.

“It disappears … lattes, tips, food at work, allowances for the kids. Just write it down and by the end of the month you’ll have most of the 10 percent and know where almost all of your money goes,” he says.

Continue to take notes on spending after the first month. “Keep up with the balance in your checkbook, each time you make a deposit or withdrawal, reconcile or balance your checkbook and also reconcile your statement when it arrives,” Cunningham says. “No one wants to do it, but it is important.”

“Even if you use a debit card, you have to write that down in your checkbook. You should carry something around that is going to keep up with your balance.” 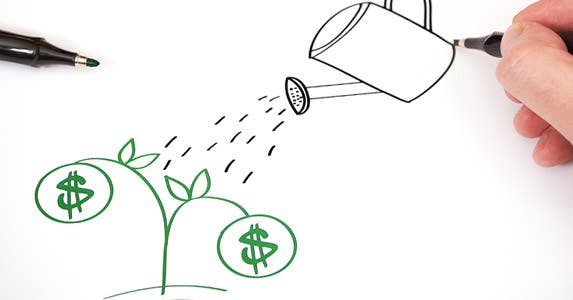 “We’re the only industrialized nation with a negative savings rate; people are spending more than they make,” says Dave Jones, president of the Association of Independent Consumer Credit Counseling Agencies.

To combat sluggish savings, earmark a certain percentage or dollar amount for a savings account. Savings accounts can be either specialized retirement accounts or regular deposit accounts. Start small to get into the routine of saving regularly.

“When you’re getting started, it’s more important that you get in the habit of saving rather than that you save a lot,” says Bucci.

Use windfalls and raises to jump-start savings as well. Got a raise at work?

“Put that money toward savings. You were living just fine without it,” says Cunningham.

Bucci recommends funneling half of the newfound income into savings. “The other half you get to spend,” he says. “So you’re not missing anything, you’re not taking anything away from yourself. You’re still getting more money than you had before, but now you’re saving a little bit more.” 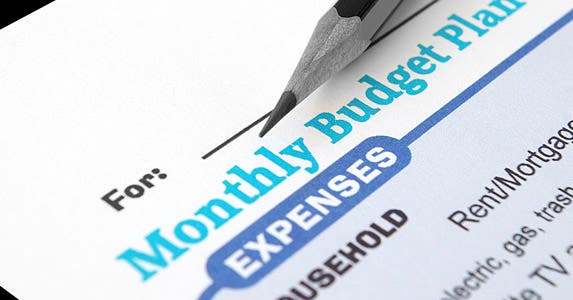 “We all need to do what is right for us,” Cunningham says. “Some people might want to use Quicken or another computer software program and others might want a pad and pencil. It’s just a matter of knowing what works for them.”

If possible, send a set percentage of your income straight to a savings account and try to configure your budget as though that money doesn’t even exist.

Plug in your income and the amount of money shuttled into each category every month. You may see areas where you can trim some fat. For instance, you could save hundreds of dollars a year by requesting lower interest rates on credit cards or shopping around for car insurance. Unnecessary drains on funds will become apparent and you have the foundation in place to take action.

“A spending plan will let people understand exactly what bills need to be paid first, or if they need to put a little extra cash toward a bill,” says Jones. 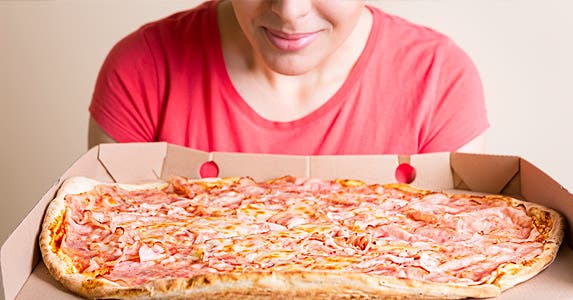 Ideally everyone would have plenty of money left over at the end of the month. But if necessities leave you tapped out by the 20th of the month, it may be time to take drastic steps, such as getting a roommate or finding a second job.

Sometimes a change could be as easy as not dining out twice a week. “If someone is spending $100 a month on pizza, then they might decide they want to look at that and say, ‘Well it’s fine to order pizza in, but we’re only going to do it once a week instead of two times a week,'” says Cunningham of the National Foundation for Credit Counseling.

“I have found that it is more successful if a person cuts back rather than cutting out,” she says.

Curtailing credit card usage, especially on impulse, might be the best behavioral change you can make, particularly if you already have a large amount of credit card debt.

Another thing to do: “Get organized,” says Cunningham. “You’re not going to believe it, but people walk into our centers carrying grocery sacks full of unopened bills.”

Use a filing cabinet or a simple box to keep financial documents in order. Bills should be kept handy in a designated box or basket. The important thing is to set up a system that works for you. 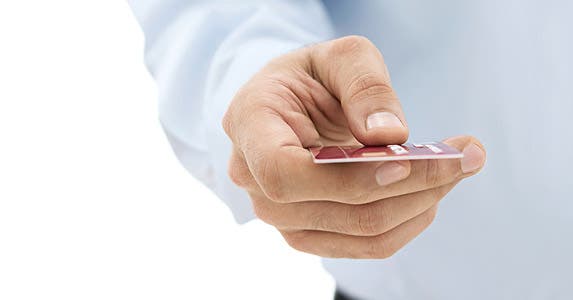 Credit can be a good thing. Loans allow people to buy cars, houses, boats and even help cushion the blow in emergencies.

“What you have to know is that you’re taking from tomorrow’s money today,” Bucci says.

On the other hand, people don’t always make buying decisions rationally and can easily rack up thousands upon thousands of dollars in debt.

“If you have a $10,000 credit card bill on an 18 percent interest rate credit card and you make the minimum payment of 2 percent — though some companies have higher minimums — it will take 40 years to pay off that bill,” says Jones of the Association of Independent Consumer Credit Counseling Agencies.

To keep a perspective on borrowing, match a loan to the life of the product. “If this is a purchase that is going to take you a long time to pay off, then you use long-term credit to pay it off, not short-term credit,” says Bucci.

“Use long-term credit for big purchases and short-term credit for purchases that you’re going to pay off in a reasonable amount of time,” he says. Extreme examples would be buying a car with a credit card or taking out a home equity loan to replace a sofa.

“You don’t want to be paying for a couch you no longer have 15 years down the line,” Bucci says. “The payments shouldn’t outlive the purchase.” 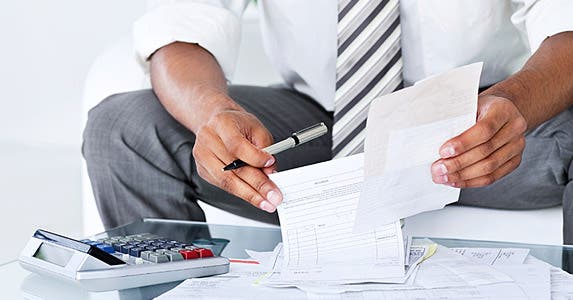 Late fees and exorbitant interest rates can eat away at even well-stocked coffers. Whether you’re juggling a lot of financial plates or have only a couple of monthly obligations, paying on time — every time — is essential.

One of the great conveniences of modern life, online bill pay allows consumers to schedule bill payments without touching a checkbook or finding postage stamps.

Some people prefer the security of real-world actions to virtual ones, however, which means they need to plan ahead.

“Payments need to be sent at least seven to 10 days before the due date,” Cunningham says. “Write the date that you are going to mail it in the upper right hand corner under where the stamp goes and then file those bills in chronological order so that anytime you sit down, you have at your fingertips which bills need to be paid.”

She also advises that if money gets too stretched, necessities should always come before paying unsecured debt.

“Last in line are the creditors, but often the consumer pays them first. I always say if your creditor is happy and your electricity has been cut off, you’ve done it backward. But really, though, the creditors put on the pressure.”