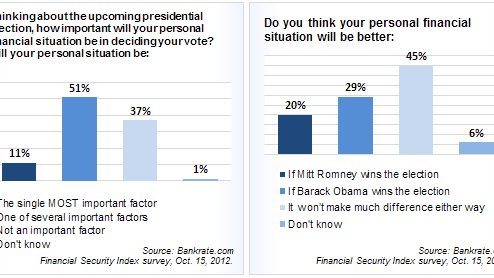 Anyone watching the U.S. economy or the presidential election closely might want to get X-rayed for whiplash.

More On Economics And Politics:

Just as economic expectations have fluctuated between an accelerating recovery and a backslide into recession, so too have the candidates’ fortunes in what’s already been an eventful campaign.

In June, Americans were evenly split, 21 percent to 21 percent, in Bankrate’s Financial Security Index over whether their personal financial situation would be better under presidential candidate Mitt Romney or a second term under President Barack Obama. Since then, Obama has opened up a lead, with 29 percent saying their finances would be better if he were re-elected versus 20 percent who said a Romney victory would improve their personal finances.

Bankrate’s survey was conducted by Princeton Research Associates International via landline and cellphone interviews from Oct. 4 to Oct. 7 and has a margin of error of plus or minus 3.7 percentage points.

Matthew Singer, an assistant professor of political science at the University of Connecticut, says the slight Obama advantage is a reflection of economic fundamentals. While the economy has been far from spectacular, those doing well enough financially to support the incumbent outnumber those willing to take a chance on a challenger by a slim margin, he says.

“People who think that the economy is rebounding a little are optimistic about it continuing under Obama, whereas people who think it’s bad are really hoping for change,” Singer says.

Many respondents to the FSI continue to express anxiety about their jobs and their overall financial picture. So it’s no surprise voters still view personal finances as an important election issue, Singer says.

“People who are feeling less secure about their job … they’re going to be focused on the economy quite a bit. They’re very scared, and my guess is a lot of the people who are ‘about the same’ are still very scared about their jobs,” Singer says. “The agenda and the election are being driven a lot by that personal economic fear.”

Americans have shifted somewhat on how they feel about the candidates’ abilities to improve their financial lot. In our most recent poll, 45 percent said the outcome of the election wouldn’t make a big difference to their finances, down from 50 percent last time.

That shift is what you’d expect as campaigns kick into high gear and devote millions of dollars to convincing voters their candidate can make a difference, Singer says.

While election prognosticators pour over every piece of macroeconomic data they can get their hands on during election season, voters tend to pay more attention to the small picture, says Erik Snowberg, a professor of economics and political science at the California Institute of Technology.

And while campaigns like to focus on whether you’re better off than you were four years ago, that’s a little further back than most people tend to think when considering a president’s performance, Snowberg says. Rather, how a voter’s personal finances have changed over the year leading up to the election exerts a more powerful influence over their decisions, Snowberg says.

“What seems to matter the most is sort of the one-year change in the year before the election, especially what happens in the second and third quarter of the election year,” Snowberg says. “The growth and unemployment rate has been doing better than it was a year ago, so there’s been a slight improvement.”

“There is a strong correlation between presidential approval ratings and how Americans feel about their own financial security, particularly as the economy slowly recovers from the Great Recession,” says Greg McBride, CFA, Bankrate’s senior financial analyst.

Still, economic fundamentals aren’t the only factor in the race, Snowberg says. With fundamentals dictating the vote split almost exactly evenly, get ready for a close election in November.

“We’re sort of in the margin of error of what the economy says should happen, so something that can swing voters a little bit one way or the other could be decisive,” Snowberg says.