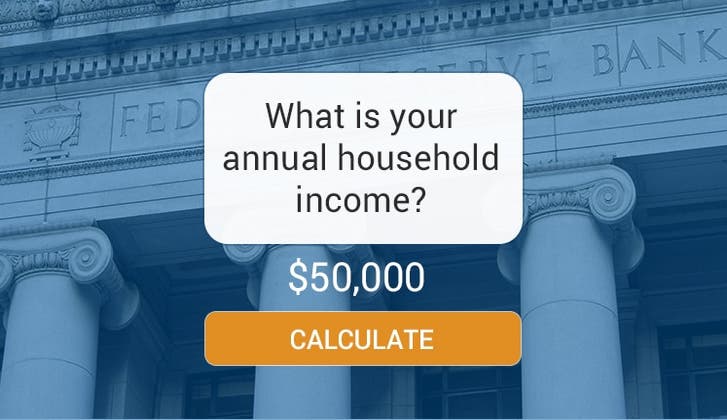 Ever wonder what the federal budget would look like if Congress worked with your salary instead of a few trillion dollars in public money? This calculator helps you make the conversion.

There’s a huge difference, of course, between a household budget and a national budget. But a little micro-perspective might be helpful when trying to understand national priorities that are doled out in billions of dollars.

Some of those massive earmarks might not seem so big when shrunken to the size of a household budget.

This calculator uses the 2016 budget agreement, analyzed by the Office of Management and Budget. Subsequent budgets will change the amount that each priority gets, but their slice of the overall pie should stay roughly the same. These numbers reflect fiscal year 2016, which runs from Oct. 1, 2015, to Sept. 30, 2016.

Finally, all of the household income numbers are considered to be after taxes.

Click on a category in the doughnut chart to read the explanation of what the government spends in that category.

What the government spends

How big of a priority is that? If a couple with a $50,000 annual income devoted that much of their budget to something similar — say, an alarm system, window locks and self-defense classes — they’d need to spend about $7,750 a year.

That’s enough to get your home defense in shape for several years: A standard home security system costs about $500 per year to install and maintain; replacing windows and doors runs about $7,000, depending on the size of a home; and self-defense classes tend to cost a few hundred dollars per year.

A big number, but a tiny wedge of the federal pie.

Congress will spend $42.1 billion in 2016 on various energy and environmental programs. Much of that money is devoted to regulating the energy industry and promoting the further development of the country’s energy resources.

Still, 1 percent of the budget is a relatively small commitment. A typical American family spends about $3,000 on energy bills alone, per person, according to the Department of Energy.  That would be 12 percent of the annual budget of a couple earning $50,000 per year.

The Obama administration set aside $54.4 billion to pursue the country’s interests abroad. That’s a little more than one-hundredth of the entire federal budget.

Big or small? Well, if a typical American family with a $50,000 income had the same priorities, it would spend about $677 a year building friendships in the neighborhood. That probably wouldn’t cover the yearly cost of homeowners association dues, cupcakes for the Fourth of July party and a bottle of wine for the neighbor’s Super Bowl barbecue.

As with all external relations, the price goes up depending on your relations with your neighbors.

The role of the government in health care remains a hotly debated topic, especially with Medicare spending expected to increase over the next decade.

Congress and the Obama administration agreed to spend $1.1 trillion on Medicare, Medicaid and other health-related programs in fiscal year 2016. That’s more than a quarter of the federal budget.

A family taking home $50,000 a year would need to spend $13,712 to match what the government spends in health care. And in many cases, they do, but their employer likely kicks in a sizable chunk of that. Employer-sponsored health coverage charged an average premium of $17,545 in 2015, with workers contributing 28% of that cost out of their own pockets, according to the Kaiser Family Foundation/Health Research & Education Trust.

The biggest chunk of the federal pie goes to Social Security, unemployment compensation, general disability and other labor-related expenses. The White House expects to spend $1.42 trillion in 2016 on this expense, or more than a third of the budget.

This is the pie wedge that’s usually driving the national conversation over entitlement reform. Social Security is getting ever more expensive as baby boomers retire, and budget analysts question how long the United States will be able to pay the tab.

Just how big of a deal is Social Security and other labor entitlements? Imagine a typical family with a $50,000 income: If they handed over $17,698 per year to their parents, disabled adult children and other relatives, they’d match the commitment the government pays for Social Security and labor.

Many Americans commute long distances for their jobs. That often means dealing with car loans, airfare, taxis, gasoline, insurance, repairs and other transportation costs. In short: Getting around can get expensive.

If a family earning $50,000 allocated the same portion of its budget to transportation as does the federal government, it would spend $341 per year. If we use the Bureau of Labor Statistics as our guide, actual spending would be several times greater than that. The BLS estimates Americans spend an average of $9,000 per year on transportation.

The White House plans to spend $84.8 billion for teachers, cafeteria workers, public school programs and other education expenditures in 2016. That’s 2.1% of the federal budget.

How small of a priority is education in the federal budget? If a family with a $50,000 annual income devoted the same 2.1% of its pay to education, it would have only about $1,055 to spend after taxes. That would make private school nearly impossible without some other form of assistance.

The average private elementary school charged $8,429 in tuition for the 2015-2016 academic year, according to Private School Review, and private high schools charged an average of $12,875. Vermont has the highest private high school tuition at more than $36,000 a year. Once you hit higher education — undergraduate, graduate and vocational degrees — costs increase significantly.

The $182 billion devoted to America’s 21.7 million military veterans amounts to about 4.5% of the federal budget.

If a family earning $50,000 a year gave about $2,269 of its income to a local veterans support center, or to a family member who served in the military, it would be the same level of support.

The rest of the budget includes a potpourri of items, such as general government expenses and community and regional development spending.

The government expects to spend about $283 billion in 2016 to keep up with interest payments on the country’s accumulated debt. Huge, right?

Well, compared with the average American borrower, that amount is actually quite low. The government’s interest payments amount to 7% of the federal budget.

If a family making $50,000 had a debt load proportional to the federal government’s, it would fork over about $3,524 per year in interest payments. That’s roughly the median household credit card debt. And that’s just credit cards. Most families also have student loans, car payments and mortgages.

The budget’s line item for “legislative functions” amounts to $4.15 billion in fiscal year 2016. That’s how much it costs to run Congress. That comes out to about $7.8 million for each member (435 in the House, 100 in the Senate).

Most members of the House and Senate earn $174,000 a year (5 members in leadership positions earn $193,400, and the Speaker of the House makes $223,500). Each member gets $944,671 to pay staff salaries, plus stipends in varying amounts for official office expenses and official mail.

The annual budget for Congress is a little more than what’s spent each day on Social Security, unemployment and labor.