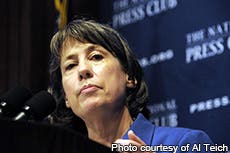 Sheila Bair speaking before the National Press Club in 2011.

She sounded alarm bells before the 2007-2008 financial crisis. Now she worries that a new crisis might be in the making. Sheila Bair, former chairwoman of the Federal Deposit Insurance Corp., tells Bankrate that the Federal Reserve is creating potentially dangerous asset bubbles.

After issuing warnings about the risks of Wall Street investments in subprime loans, Bair was thrust into the spotlight during the financial crisis. Under her leadership, the FDIC increased deposit insurance limits to protect borrowers from collapsing banks, and created temporary liquidity guarantees aimed at restoring normal functioning of credit markets.

Now, as chair of the Systemic Risk Council, she focuses regulators on the dangers posed by financial institutions that are too big to fail. In this Q&A, Bair says economic policymakers are treading water with cheap money from the Fed, calls “self-regulating market policies” a mistake, questions whether big banks would be alive without government support and says the Consumer Finance Protection Bureau has left consumers better off.

This July, it will have been two years since you left the FDIC. You worked through the financial crisis. What are your thoughts about the stability of the global financial system right now?

I’m worried. I really am. The good news is that we do have more capital in the banks. There’s still too much leverage in the system, I think, but it’s not nearly as bad as it was prior to the crisis. But in terms of culture, in terms of risk-taking, I’m not sure we’ve seen a fundamental change. I think the market has imposed some discipline. Investors have imposed some discipline, but I’m not sure we’ve had deep cultural changes in the management of these. It’s really more on the trading side, I think, that we’ve seen a lot of the problems.

And then the Fed’s monetary policy: Undertaken with the best of intentions, but I do think it’s creating distortions. It absolutely made sense in 2009. Since then, I’m not sure if it does. And the longer it goes on, the bigger the risks are. Some of it is obvious, like with the junk bond yields.

And if I really thought we were getting real economic growth from it, I’d say it’s worth the risk. But I just don’t see that. I see a lot of cash sloshing around the system, creating more asset bubbles. But the economy is still flat on its back.

Where do you see the asset bubbles?

Well, the bond market. Both the bond and stock market are overpriced at this point. It’s really obvious with junk bonds, and it could be in other places we haven’t even seen yet. If you’ve got the stock and the bond markets, that’s a pretty big section of the financial markets already.

I’m glad to see home prices start to come back, but it looks like there are distortions there, too. I haven’t looked at the most recent reports — you hear anecdotal reports of some counties seeing 8 (percent) to 10 percent increases in one month. What’s going on with that? That’s not sustainable. I want it to come back, but I want it to come back in a way that’s based on good, solid economic fundamentals and is going to stick. So I’m not sure what’s going on with housing.

The cheap credit is designed to get people to borrow and spend more. And they don’t want to borrow and spend more. They want to delever, and they should delever. They need to build up their savings. They need to build up their financial security. That’s not just a moralistic argument. That’s a good economic argument. We are in a market system that has cycles, and people need to have some savings for their own financial security, and an economy that is driven by a lot of leverage and unsustainable borrowing eventually corrects. That’s what we saw in 2007 and 2008, and I don’t want to see it again.

I don’t think that what they’re doing is going to help us bring down the unemployment rate. I think that’s the bottom-line problem: that there’s no cause and effect there. Again, this whole idea that taking cheap loans and spending again, the public — they don’t want to do that. They shouldn’t do that. They need to delever, they continue to need to delever, and it’s not a sustainable model going forward, anyway. We need real economic growth. We need a tax code that makes sense. We need entitlement spending that makes sense. We need an immigration policy that makes sense. We need an infrastructure that will support our economic growth. We’re not doing any of that. We’re kind of treading water, and we’re funding it with cheap money from the Fed. So the Fed can’t do it.

We’ve had a lot of very complex rules that kind of changed things around the edges, but fundamental change, we really haven’t seen.

That’s a very difficult question to answer. I think the Bush administration continued the self-regulating market policies of the (former President Bill) Clinton years. And that was a mistake. We should have been raising capital requirements in the early 2000s. We should have had mortgage-lending standards. And the regulatory tools were there. This did not need to be done by statute. We should not have deregulated derivatives — actually, Clinton did that. So the Bush (administration) did continue deregulatory polices, and that was a mistake. So this administration has tried to restore some equilibrium with more regulatory vigor. But just any regulation isn’t necessarily good regulation. And so I think the weakness in execution with this administration has been on getting the regulations done and making them simple, effective and meaningful.

We’ve had a lot of very complex rules that kind of changed things around the edges, but fundamental change we really haven’t seen. So I think that’s one difference.

And if you’ve got big, bloated, inefficient financial institutions, the government shouldn’t be propping them up.

We propped up a bloated financial sector. We didn’t rip off the Band-Aid. We decided to prop ’em up and let ’em do it over time. So they’re very slowly doing it over time. There (are) still a lot of bad assets on those big banks’ books. I question whether all those big banks are really economically viable if it weren’t for the perception of government support. They should have been restructured, frankly, in my view. I’m a rip-the-Band-Aid-off kind of person. So I like to think the Bush folks would have done more fundamental restructuring of the banking system. But I don’t know if they would have or not.

I do think Republicans, for all the bashing that they get for being pro-big industry and all of that, there are some in our party who are too influenced by big financial institutions. But I also think they’re supportive of the party that at its core is very market-oriented and understands that your first loss is your best loss. When the losses are there, you take them. And you get an economic correction faster and more robust when you do that. And if you’ve got big, bloated, inefficient financial institutions, the government shouldn’t be propping them up. They should be breaking them up and letting the market deal with them. So I would have wished we would have followed those kinds of policies in 2009. We didn’t.

One of the things that has happened since the crisis was the passage of Dodd-Frank and the creation of the Consumer Financial Protection Bureau. Do you think consumers are any better off with that kind of a body in place?

I think they are. I think the CFPB’s mere existence has heightened awareness of consumer protection and treating consumers in a way that’s fair. I don’t agree with everything they’ve done, but I think they have improved the consumer regulations. I think the mortgage disclosures are clearer. It takes a thousand pages (laughing) to explain them. Those are more clear.

This “QM” (qualified mortgage) rule — I don’t like it because I didn’t like what Congress did. The Congress told them to do this QM rule, so I think given the instructions that were given, they did a pretty good job with it, a pretty balanced job. And I think their enforcement presence — again, people are awake now. Financial institutions are awake on protecting consumers and understanding their obligations to consumers. Not all of them were as attentive to that as they should have been prior to the crisis. So I think those are net positive things. I think the consumer bureau has done well.

It sounds like the Republicans now, instead of trying to get rid of it, really want to look at structural changes, like a commission instead of (a) director. And there’s legitimate argument for that structure. I hope the debate centers on governance issues like that and not whether we should have it or not, because I think we should have it.

So, about the GOP efforts that supporters of the CFPB say are really meant for taking the teeth out of the agency, you don’t necessarily see it that way?

It depends on what kind of reform you are talking about. I think having a commission as opposed to a director: No, I don’t think that takes the teeth away. We had a board structure at the FDIC. They have one at the Fed. Lots of agencies have board structures. It is always about who you appoint. If you get a single director or a board, you need to have high-quality people who are committed to public service on those boards. I think, if anything, boards are better because they guard against regulatory capture going one way or the other.