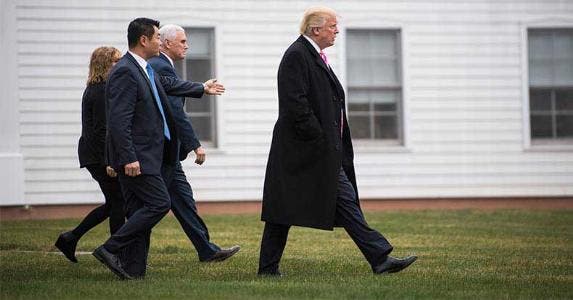 Here’s welcome news for working Americans: Experts say the coming year should bring higher wages as the job market continues to firm and the economic expansion moves into its eighth straight year. But they also see increased risks, including more expensive borrowing costs and the possibility of a recession before the next presidential election.

The latest Bankrate Economic Indicator, our quarterly survey of economists, predicts that higher interest rates are in the offing, due to a highly likely December rate hike from the Federal Reserve and expectations of further increases in bond yields.

We asked the experts: Will Americans' pay improve next year? 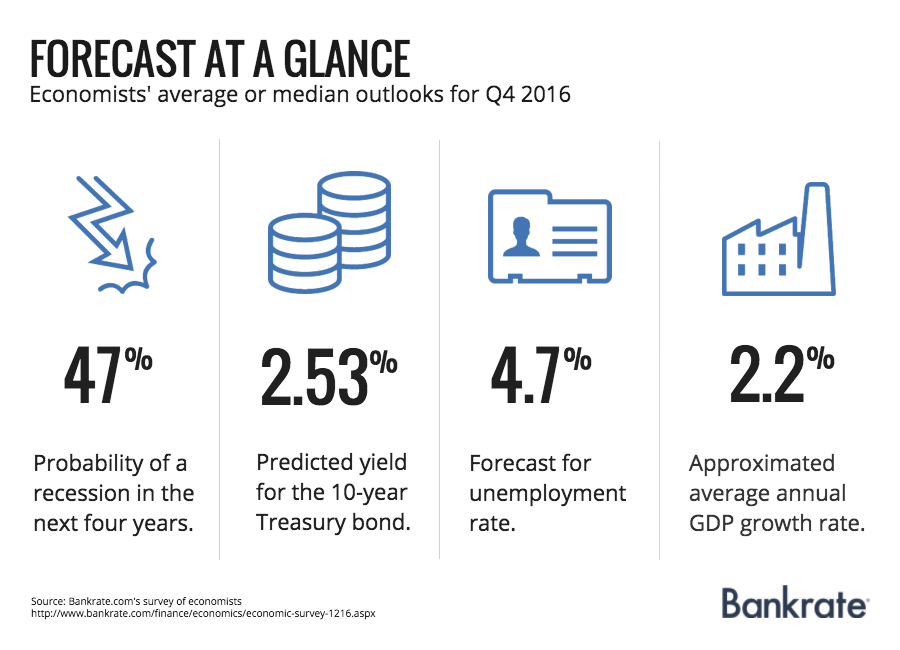 More broadly, the survey conducted after Election Day finds economic growth over the next year should rise above 2 percent, while the unemployment rate will remain below 5 percent.

Odds of a recession? Nearly even

The economists are split on the risk of an economic downturn over the next four years. Recessions begin when expansions end.

If the expansion, which began in mid-2009, were to continue until the next election, it would be the longest in the post-war period, says Scott Anderson, chief economist for Bank of the West.

On average, the experts put the probability of a recession over the next four years at 47 percent. That’s more than double the 22.5 percent chance we were given when we asked last quarter about the odds of a recession over the next 12-18 months. “Inflation and debt are picking up, and both are precursors to a recession. As (Federal Reserve policymakers) normalize rates more, imbalances in the economy may come to light,” says David Nice, senior economist with DS Economics.

The economists’ individual responses on recession odds range from a low of 10 percent to 95 percent at the high end.

In the bond market, interest rates have already staged a dramatic increase. The economists look for those higher levels to hold; their average prediction for the 10-year Treasury bond yield one year from now is 2.53 percent.

The economists are unanimous in looking for the Federal Reserve to nudge interest rates higher at its mid-December meeting, coming one year after the Fed’s last rate hike.

Sean Snaith, of the University of Central Florida’s Institute for Economic Competitiveness, says the central bank, led by Federal Reserve Board Chair Janet Yellen, will be watching the actions of the incoming administration closely. “Pro-growth policies of the Trump administration will hasten the pace of interest rate hikes by the Fed,” Snaith says.

Look for slow, steady improvement in the job market over the next year. The economists, on average, look for monthly job gains of about 164,000, down from the pace of 181,000 per month seen so far in 2016. The gains in hiring will be enough to tap the unemployment rate slightly lower. The experts’ average forecast is for a jobless rate of 4.7 percent a year from now. That’s a tad lower than the 4.9 percent October rate reported by the Labor Department.

Asked about economic growth one year from now, the economists have generally held steady compared with what they’ve told us in the past few quarters. Their average annual growth rate in the gross domestic product (GDP) is 2.2 percent, up only slightly from the third-quarter outlook.

“Growth will be led by consumer spending and, to a lesser extent, a rebound in business investment spending,” says Robert Dietz, chief economist for the National Association of Home Builders. “An improving labor market has accelerated wage gains in recent months, and we expect this to continue to support consumer spending.”

The individual GDP growth forecasts range from a low of 1.4 percent to a high of nearly 3 percent.