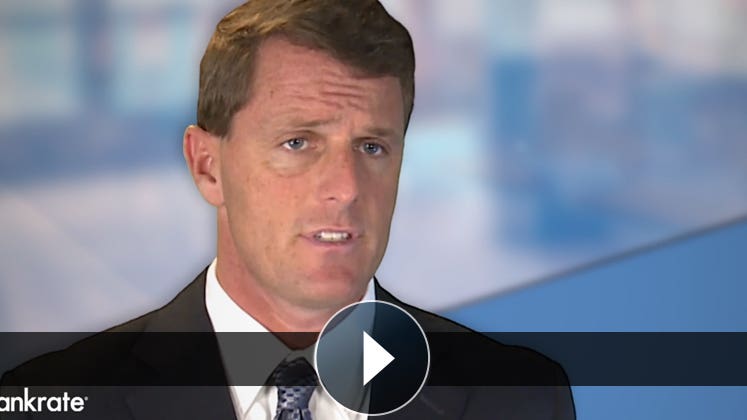 Once the Federal Reserve finally feels that it’s time to start raising interest rates, it will move in baby steps. That’s what economists participating in the latest Bankrate Economic Indicator survey are expecting from the central bank’s 1st upward moves since 2006.

“The pace of interest rate increases by the Fed will be so shallow the next 2 years (that) it will be more interesting watching paint dry,” quips Bernard Baumohl, chief global economist with the Economic Outlook Group.

“The Fed will want to establish a measured but not too predictable pace of rate increases,” says David Crowe, chief economist for the National Association of Home Builders.

When policymakers last met, in July, the central bank stopped short of an outright prediction of a rate hike at the mid-September meeting. Still, various Fed officials have pointed to the likelihood of a rate increase in 2015.

Asking economists: Could the Fed's low interest rates come back to bite us?

See what experts say about potential dangers to the economy after years of ultralow interest rates.

15 out of 23 experts — 65% of the respondents — said the Fed could start raising rates as early as the Sept. 16-17 policy meeting. But the survey wrapped on Aug. 13, before China devalued its currency and triggered a massive sell-off on stock markets around the world. Those events have given way to a growing view that the Fed will wait with its “liftoff.”

Bankrate conducted a 2nd, “flash survey” Aug. 31-Sept. 1, asking only about the timing of an initial rate hike. This time, just 10 of 24 economists who responded (42%) said it would come at the September meeting. The other 14 (58%) said the Fed would hold off until a later time.

In the original survey, Navy Federal Credit Union corporate economist Alan MacEachin predicted a rate hike would come this month. Now, he’s not so sure. “The Fed appears anxious to begin normalizing rates, but likely will not have sufficient evidence of rising inflation to justify liftoff before December,” he says.

While borrowers might grimace at the prospect of higher loan costs, a long-awaited increase in rates should bring smiles to savers who’ve suffered through years of low returns. The economists also expect generally steady economic growth ahead, with little risk of a recession on the horizon. 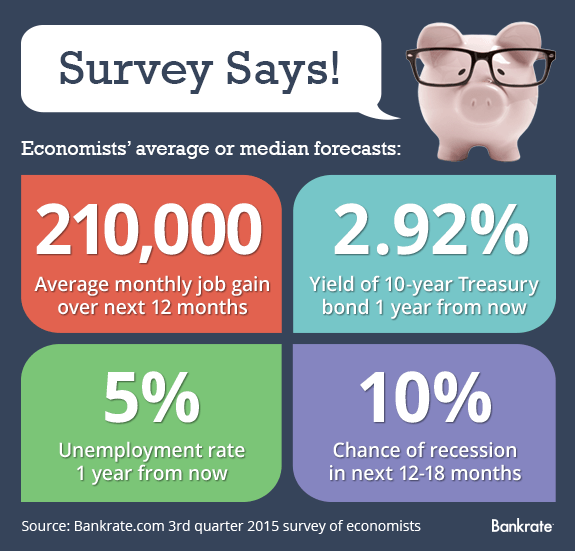 Pace of rate hikes: The economists indicate that the Fed will raise interest rates gently, not with a steep jump. “The more important question is the pace of tightening after the 1st move. Fed officials expect that to be gradual. Most likely, 100 basis points (1 percentage point) per year, or 25 basis points at every other (policy) meeting,” says Scott Brown, chief economist with Raymond James & Associates.

39% percent originally said a September rate hike would be followed by a 2nd in December. But more than half said the Fed would wait until the 1st quarter of 2016 or later. “Rate hikes will be gradual,” says David Nice, economist at Mesirow Financial.

The job market: You can expect a respectable pace of hiring to continue. Our panel of experts looks for payrolls to expand by a monthly average of 210,000 jobs over the next year. That almost matches the average of 211,000 jobs added so far in 2015. It is also lower, or less optimistic, than the estimates offered in earlier surveys.

On average, the economists expect the unemployment rate to slip to 4.96% a year from now. Note that their previous forecasts have been conservative: A year ago, the survey predicted a jobless rate of 5.7% by now, but the Labor Department recently reported that the jobless rate stood at 5.3% in July. 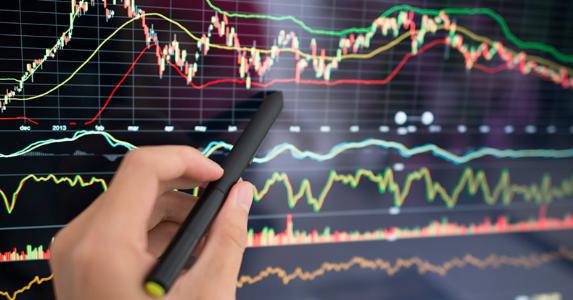 Recession risk: The economists generally don’t believe there’s significant risk of a recession in the next 12-18 months. An overwhelming 91% say the odds of a recession are no more than 1 in 5. “There are few imbalances in the U.S. economy right now that could cause a recession,” says Gus Faucher, senior economist at PNC Financial Services Group.

Economic growth: The economists, on average, say the economy should grow at a 2.65% annual rate over the next year. Their individual answers ranged from a weak 1.8% pace to a more solid 3.2%. What will drive the growth? “Consumer spending, business investment in innovation, and homebuilding should drive any improvement in economic performance,” says Point Loma Nazarene University chief economist Lynn Reaser.

Bond market: While the Fed sets the benchmark federal funds rate, the yield of the 10-year Treasury bond is another interest rate barometer to watch. On average, the economists think the yield of the 10-year will be 2.92% a year from now. More than 4 in 10 of the respondents look for the yield to reach 3% or higher. “Longer-duration Treasury yields will continue to be influenced more by international capital flows as opposed to federal funds rate changes,” says John Silvia, chief economist with Wells Fargo.