Loving today’s cheap gasoline? Hating all the sharp turns on financial markets? Well, you may be out of luck on both counts. Fuel prices are likely to rise during the next 12 months, while financial markets will provide an even rockier ride for investors, according to the latest Bankrate Economic Indicator, a quarterly survey of top economists.

On average, the experts expect oil prices to rebound a bit from their recent low levels. “Excess inventories have depressed the current price, but once inventories have declined to more normal levels, the price should be somewhat higher than today,” says William Poole, former president of the Federal Reserve Bank of St. Louis.

Still, “the revolution in fracking technology will likely keep oil prices well below the average of recent years,” he adds.

Viewed together, the economists’ forecasts call for solid hiring that will help drive the unemployment rate down and spark greater growth in wages. Interest rates should rise because the Federal Reserve is likely to pull the rate hike lever for the first time since 2006, the economists say. While the consensus is upbeat, there are some significant differences among the survey participants.

Oil prices: Nearly 70 percent of the panel members expect West Texas Intermediate crude oil to be priced between $60 and $70 a barrel one year from now. A few look for oil to top $70 by that time, while a smaller number believe crude will be selling for less than $60. As of this writing, a barrel of the benchmark crude was trading just above $50. None of the 25 participating economists expects that crude will decline in price over the next year.

Market volatility: A majority expect financial markets to become even choppier in the year ahead, while only 8 percent predict a quieting of market conditions. Nearly one-quarter see volatility remaining around current levels. “I expect 2015 to be a bumpy year,” says Alan MacEachin, corporate economist at Navy Federal Credit Union. 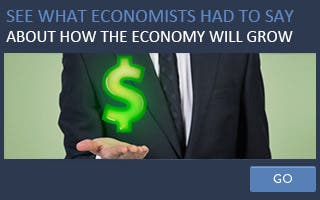 Economic growth: One year down the road, the panelists look for gross domestic product, or GDP, to be growing at a rate between 2.1 percent and 3.61 percent. The average works out to nearly 2.9 percent, or about the same as the economists forecast a year ago. About one-third of the panel looks for growth to top 3 percent.

Wages: An improving job market should bring a payoff in the form of bigger paychecks. Nearly all the survey respondents expect a rise in average hourly earnings this year; more than 7 in 10 forecast that the improvement in pay will be between 2 and 2.5 percent. In the January jobs report, the Labor Department said average hourly earnings increased 2.2 percent over the previous 12 months.

Job market: On hiring, our experts see a lower unemployment rate and an average of 236,000 jobs added per month through the end of February 2016.The average prediction is for a 5.2 percent jobless rate a year from now, a half-point below January’s rate of 5.7 percent. Forecasts ranged from 4.7 percent (from Hugh Johnson, chairman and chief investment officer, Hugh Johnson Advisors) to 5.7 percent (from Sean Snaith, director of the University of Central Florida’s Institute for Economic Competitiveness). In our survey a year ago, the average forecast was that the unemployment rate at this time would be 6.2 percent.

Federal Reserve: Expectations for the Fed’s first rate hike since the recession mostly focus on June or July of this year, and 84 percent of the respondents expect it will happen sometime in 2015. In our previous surveys, the economists had looked mostly for a June rate increase. “Additionally, later this year, the Fed will likely begin to allow their balance sheet to shrink, reducing reinvestments from prepayments and maturities in their securities portfolio,” says Mike Fratantoni, chief economist with the Mortgage Bankers Association.

Bond market: With the Fed expected to tighten, the economists see higher interest rates in the marketplace, including a modest rise in the yield of the 10-year U.S. Treasury bond. The average prediction is for a 10-year of 2.67 percent one year from now. Toward the high end of forecasts, at 3.4 percent, is Mark Zandi, chief economist for Moody’s Analytics. “Increasing inflation expectations will drive the 10-year yield higher,” he says. By contrast, Lindsey Piegza, chief economist with Sterne Agee, sees the yield little changed a year from now, at 2.1 percent. She cites “continued weakness in domestic and global economy.”