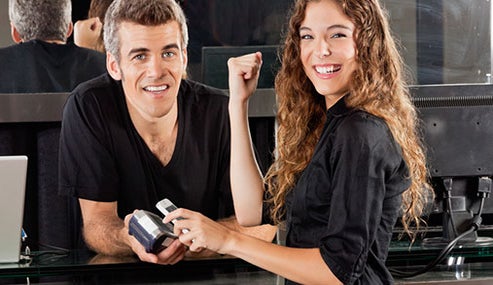 Irked by a brick-shaped wallet or get a charge from being the first of your friends to adopt whiz-bang technology? You might be a candidate for a mobile wallet.

A mobile wallet is a payment system that uses an app on your smartphone linked to a credit card, debit card or prepaid card to make payments in person at a physical point of sale. At their core, they’re an extension of digital wallets, or online payment systems such as PayPal that store your payment information for online purchases. But these are used in brick-and-mortar stores.

A survey in January of almost 1,500 smartphone owners by Chadwick Martin Bailey, a Boston-based consumer research firm, found 16 percent of respondents had used a mobile wallet in the previous six months. At this point, it’s likely that regular mobile-wallet users are substantially outnumbered by the 14 percent of Americans who believe Bigfoot is real.

But that hasn’t stopped a mix of startups and established companies from putting forward a number of mobile wallets, including Google Wallet; Isis, a joint venture of AT&T, T-Mobile and Verizon; Square Wallet; and startup LevelUp.

A variety of apps

While all these apps allow you to make a purchase at a point of sale, they all work a little differently.

Regardless of how exactly they work, security is a big worry for consumers. In the Chadwick Martin Bailey study, 73 percent of consumers who don’t plan to adopt mobile wallets cited security as a reason they haven’t tried them.

“The other barrier to adoption is making sure that consumers have confidence in the safety and security of their data,” says Denee Carrington, a senior analyst at Forrester Research Inc.

“We all hear stories every day about cyberattacks, and consumers are right to be wary of how their payment credentials are being stored and used and passed around,” she says.

John Breyault, vice president of public policy, telecommunications and fraud at the National Consumers League, says that fear may be a bit overblown. Unlike a conventional wallet full of plastic, smartphones can be locked with a PIN, so thieves may not be able to access it. And even if they can, many smartphone providers allow you to remotely shut down your phone if need be.

If thieves do manage to charge purchases to your mobile wallet, a lot of the same protections consumers have when they make conventional card purchases also apply to mobile-wallet transactions, Breyault says.

“If you are linking a credit card or a debit card to your mobile-wallet account, then you’re still pretty well-protected by federal rules that require things like allowing you to charge back fraudulent purchases,” Breyault says.

However, a mobile wallet that is linked to a prepaid debit card may not enjoy the same legal protections, Breyault says. If a fraudulent mobile-wallet purchase drains your prepaid debit card, your bank may not be legally obligated to restore the funds as they would with a conventional debit card, he says.

Carrington says concerns about consumer protections may be moot if mobile wallets never catch on. And that won’t happen until mobile-wallet providers convince both merchants and consumers there’s something in it for them.

“Consumers have a really great alternative today in using a plastic card to swipe,” Carrington says. “It is reliable, it is pretty quick, it works pretty consistently. People know how to use it, and there is not really trouble with the sort of adoption or having the right equipment.”

That’s not to say mobile wallets don’t have potential. Done correctly, they offer a number of benefits for consumers.

All that could be put together in a way that’s compelling for consumers, Carrington says. It just hasn’t happened yet on a scale large enough to be a must-have for consumers.

“There are a lot of things that have to happen for adoption to ramp up in the marketplace,” Carrington says. “Some of that has to do with merchant acceptance, consumer awareness and, quite frankly, value for both the merchant and the consumer.”