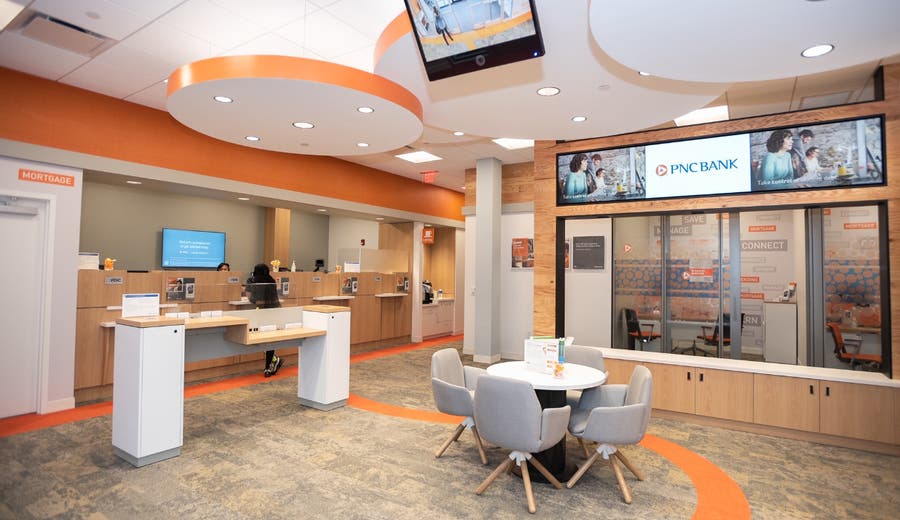 In the age of the app, it would be easy to assume that adults in their 20s and 30s would never go to a bank branch. Millions of young adults have all kinds of options to visit and do business with their financial institution from a much closer distance at all hours: on their smartphones, via Venmo and Instagram app.

Yet, even young adults can’t resist a visit to a bank’s oldest channel now and then. Lots of them, in fact.

About three-quarters of Gen Y (73.4 percent) have visited a branch to open an account, according to a J.D. Power retail banking study. Moreover, about 60 percent of younger adults told the research firm that they have visited the branch within the last three months. And according to a 2018 Gallup survey, 66 percent of millennials had visited a brick-and-mortar branch in the previous six months.

“It’s money,” says Paul McAdam, senior director of banking services at J.D. Power. “It’s a financial account. It’s where their paycheck goes. They are more likely to want to see somebody and see the place.”

It doesn’t mean young adults go to a branch on a repeat basis — far from it. But millennials who rely on a mobile bank app for ordinary tasks will still visit a branch to open an account, deposit cash, get a financial health checkup or solve a problem.

Even JPMorgan Chase recently discovered millennials want a bank that gives them money-management tools and access to branches when needed — which is among the reasons the big bank decided to close Finn, its 1-year-old mobile banking brand. According to Chase, two-thirds of customers visit its branch four times a quarter, three times for millennials. The bank said millennial customers like the Chase mobile app as much or more than other generations.

As Chase gets rid of the stand-alone Finn app, it continues to add brick-and-mortar locations in new markets at a time when the number of branches has been on the decline for the industry as a whole. It’s not the only renegade. PNC Bank is among the banks also expanding their physical footprint in new markets. Even some startups, like small business challenger bank Novo, are bullish on branches as a means to build community — including among young adults.

The reasons to visit a typical bank branch are wide-ranging but appear to be for more serious banking needs, like getting a mortgage or financial advice. Compared with older consumers, young adults are much more likely to sit in an office or at a desk when they visit a branch, the J.D. Power report found. “So, they aren’t just depositing a check,” McAdam says.

If there’s a commonality driving millennials to do IRL (in real life) banking, it is their transition to adulthood. Even the oldest millennials are still experiencing important firsts.

“When you are buying a home, getting married, merging finances, starting a business, you don’t really want to get your financial expertise from a blog,” says Eve Callahan, executive vice president and chief communications officer at Umpqua Bank. “You want to have somebody who can sit down with you and look at your financial situation and make smart, trustworthy and really personalized recommendations for you.”

Tyler McIntyre, 27, founder and chief technology officer of Novo, is among them. If he were to buy a home for the first time, he says he would not rely on a Google search for such a huge decision. “I would want to sit down with somebody who could explain what all this stuff means to me … almost like a consultant,” McIntyre says.

Young adults, just like their parents and grandparents, also visit a branch when they open an account or make a big deposit — potentially because it helps them feel more secure.

Recently, PNC opened branches in Dallas and Kansas City, Missouri, and has seen the largest balances opened at these brick-and-mortar locations — not online.

For millennials, in particular, growing up during a recession has caused ripple effects on their financial behavior.

“They saw friends and family potentially lose homes or jobs,” Morris says. “They are very conscientious about not making mistakes. They can do things on their own, but they kind of like that trusted adviser, that human connection. Someone they can go back to periodically just to check in: ‘Am I on the right track? Am I doing the right things?’”

Not everyone agrees that millennials want a branch or need one, even on occasion. All kinds of new digital-only bank products continue to multiply in the U.S., and some already have millions of customers. The new guard views a branch as a billboard at best and a relic at worst — a hefty cost that interferes with offering more compelling products and better terms on mortgages, CDs and bank accounts on more widely used digital channels. If consumers are still using a bank branch, the online-bank backers believe it is because the bank’s digital experience is subpar.

The branch of the future as a WeWork

Whether the bank branch is destined for extinction remains a hot debate in the industry. But part of the difference of opinion relates to how someone is picturing a physical bank.

“Everyone talks so badly about branch banking,” Novo’s McIntyre says. “It is because you think you need six tellers standing there, doing nothing for the majority of the day until 5 o’clock on a Friday, (when) they’re busy.”

McIntyre envisions a branch of the future that emphasizes benefits and connects like-minded individuals, perhaps over a cocktail or coffee. In fact, he wants Novo to have a physical presence in time and thinks other fintech companies will too.

“It’s almost like when you join the future digital bank, it’s like joining a WeWork,” McIntyle says.

In the U.S., there is some evidence supporting this concept. Capital One, a digital banking leader that has sharply reduced its branches, has opened 37 cafes across the country and plans to open more. In these cafes, you can drink Peet’s coffee while applying for a credit card, learning how to pay your bills online, using fee-free ATMs and doing your work on the free Wi-Fi. You could also attend a free seminar or get three free money coaching sessions, whether you’re a customer or not.

“The point is to help people better understand their relationship to money and ultimately stress less about it,” said Lia Dean, head of bank retail/cafes and marketing at Capital One, in an email to Bankrate.

Rivals aren’t introducing the same-old branch concepts of yesteryears, either. While banks across the nation are trimming their networks, they’re also testing a wide range of new branch formats. Often, their newer branch models include the absence of teller lines and the addition of roaming bankers who are equipped to give consumers advice on all types of banking needs, ranging from getting approved for a mortgage to selecting a higher-yielding money market account to getting help building a retirement nest egg.

The services provided by the bank branch of the future point to a transformation: You don’t go to a branch to deposit a check. You go to get advice.

“The value and purpose of going to the branch will be more about speaking to someone who is highly skilled in terms of advice, solving complex needs and helping you plan for your future,” PNC’s Morris says.

Visits could also center on a financial checkup. Maybe you listen to a “Chase Chat” at one of the bank’s branches to learn about buying a home or finding more ways to save. Maybe you pop in a KeyBank branch to get a personal finance review. Or maybe you visit a Capital One Cafe for a “coaching” session.

Find a banker on an app

You may even have the option to chat with a banker in other less-expected ways. Last year, Umpqua Bank, widely celebrated for its unique branch experiences, made a splash by rolling out a mobile app that lets anybody choose a banker in a similar way you choose a date on a dating app: You pick a banker based on their photo and bio, including personal interests. Then, you can then text the banker via the app about how to consolidate debt or how to replace a debit card or something else. If desired, you can meet some of the bankers at a branch (or as Umpqua calls them, “stores”).

The idea behind the Umpqua app — which counts more than 27,000 customers as users — is to help make sure the human element isn’t lost among all the do-it-yourself technology involving the complex and emotional subject of money.

“It’s taking the store relationship and modernizing it into a new channel,” Callahan says. “It’s an exciting next step.”

Whether the app succeeds or fails across all ages remains to be seen. But don’t expect the brick-and-mortar bank branch to disappear anytime soon as a consequence. People of all ages continue to visit them, just less than before.

“There are moments when people want to come in and be face to face, and we don’t see that going away entirely,” Callahan says. “We believe there is going to be an important role for physical locations well into the future.”