ATM fees are among several kinds of bank fees that can eat into your account balance over time if you don’t look out for them.

There are two fees that may come with a withdrawal at an ATM that are outside of your bank’s network: a surcharge from the ATM’s owner and an out-of-network fee from your bank or credit union. The average surcharge is $3.08, and the average out-of-network fee is $1.51, according to Bankrate’s 2021 checking account and ATM fee study.

While the total cost of making an ATM withdrawal has dropped slightly from previous years, the fees can still add up. They’re avoidable — or at least reducible — though, if you take some simple measures.

When you check out at a grocery store or other retailer, you’ll typically have the option to get cash back with the purchase. To get cash back, pay with a prepaid or debit card, and enter your personal identification number (PIN). The PIN pad will prompt you to either select an amount or enter the amount you’d like in cash back, to be withdrawn from the account associated with the card. Getting cash back from a store generally does not incur any fees.

When you use an out-of-network ATM, you may be hit with a surcharge from the bank that owns the ATM, as well as a fee from your bank for using an ATM not in its network. As such, sticking to in-network ATMs is a simple way to avoid these costs.

An ATM owned by your bank or credit union, or one that’s within the bank’s partnered ATM network (such as Allpoint or MoneyPass), won’t charge the out-of-network fee. To find an in-network ATM, try using an ATM locator on the bank’s mobile app or its website.

Go digital with a payment app

In many cases where you’d normally use cash, it’s possible to go digital instead. Then, you don’t have to withdraw money from an ATM at all. For example, some service providers, such as hairdressers, may accept tips through digital payment providers, such as Venmo or Zelle. Some retailers may also accept payment for goods through these peer-to-peer payment apps. Just make sure to check beforehand that your preferred payment app is accepted by the merchant.

It pays to make fewer withdrawals from out-of-network ATMs, since each withdrawal will come with a fee. You can take out larger sums of cash in a single ATM visit to prepare for cash spending in advance.

Keep in mind that there are ATM withdrawal limits, however. The maximum amount you can withdraw from an ATM varies by bank and ATM, but it typically ranges from $500 to $1,000 a day.

There are numerous banks and credit unions that offer checking accounts with no ATM fees or reimbursements for ATM fees. Many of these are online-only banks.

Some financial institutions will reimburse fees up to a certain amount each month, such as Alliant Credit Union, which reimburses up to $20 a month in ATM fees for Alliant Visa debit card users. The credit union states that reimbursements are deposited into the customer’s account at the end of the day.

Getting money from an out-of-network ATM and paying the average total ATM withdrawal fees just twice a month would cost you $110.16 in fees in one year. But doing something as simple as looking up what ATMs are in your bank or credit union’s network could help save on fees.

There’s no single way to minimize ATM fees, but there are several strategies depending on how you prefer to bank and what you need cash for. When possible, going digital by using a payment app can save a trip to the ATM and a few bucks in fees. Also, check with your bank to see if it already offers reimbursements for ATM fees. 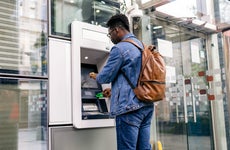 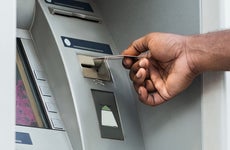 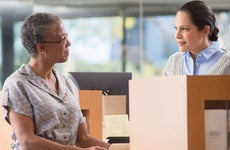 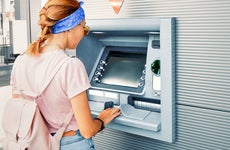