Be ready for another stocking stuffer from the Federal Reserve this year.

Experts surveyed by Bankrate say the Fed will raise a key short-term interest rate one more time in 2017, most likely in December. It would be the third rate hike of the year and the third straight end-of-the-year increase in the central bank’s benchmark federal funds rate.

Savers will rejoice. But debt holders, especially those with a home equity line of credit (HELOC) or credit cards, will have extra motivation to pay off their balances, as their interest rates are likely to jump quickest.

Participants in our third-quarter Bankrate Economic Indicator poll of leading economists also expect recent levels of muted economic and job growth to continue over the next 12 months. And they believe Fed Chair Janet Yellen should be reappointed when her term expires early next year. 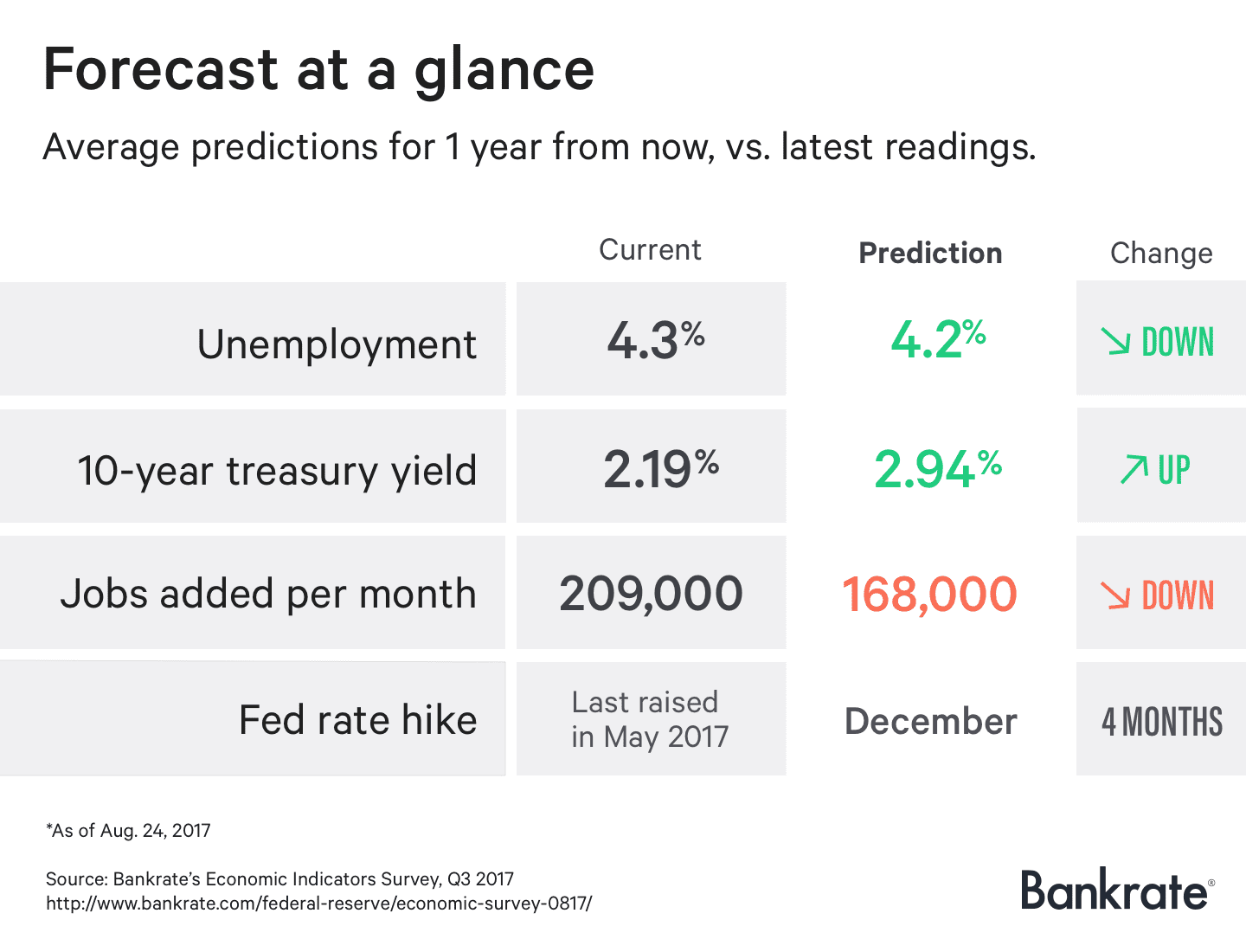 The overwhelming consensus among the 21 economists we surveyed is that the Fed won’t lift interest rates until December, skipping over opportunities in September and November.

Bankrate’s panel has a mixed recent record when it comes to accurately predicting the Fed’s rate moves. Eight in 10 correctly forecast the rate increase that came down in June, but only 38 percent nailed the March rate hike.

A rate increase is “the wrong thing to do,” says Robert Brusca, chief economist with Fact and Opinion Economics, “but the Fed is dead set to get the funds rate moving back toward the ‘old normal’ even though these times are still a very wounded ‘new normal.'”

While employers are adding to payrolls at a reasonable clip, lackluster wage growth and continued weak inflation have complicated the efforts of Yellen and company to return short-term interest rates to a more historically normal level.

According to the survey, the economists expect, on average, that 12 months from now:


Home buyers will be most interested in the survey’s forecast for the yield on 10-year Treasury bonds, which is a benchmark for mortgage rates. Demand for this safe asset has remained strong and has kept prices elevated as investors show precious little fear of higher inflation, especially as the Trump administration’s plans for tax cuts and massive infrastructure spending remain in the idea phase. (Bond prices and yields are inversely related.)

In the survey, the average estimate for where the 10-year yield will be a year from now is 2.94 percent — about 70 basis points higher than today’s yield.

Now is the time to refinance your mortgage or pull the trigger on that dream house you’ve been eyeing, if you’re able to find one in your price range.


The Fed also is expected to put upward pressure on mortgage rates and other long-term interest rates as it pares its $4.5 trillion balance sheet following the September meeting. This will reverse the central bank’s unprecedented bond-buying to pump up the economy over the last decade, and no one is quite sure how it will unfold.

Yet 81 percent of those polled aren’t worried about negative consequences over the next year from so-called “normalization,” given the slow pace the Fed is expected to take.

And what about the Fed boss?

More than three-quarters of the economists say they believe Fed chief Yellen should stay in her current role when her four-year term expires on Feb. 3, 2018. But President Donald Trump is reportedly considering nominating his current chief economic adviser Gary Cohn instead.