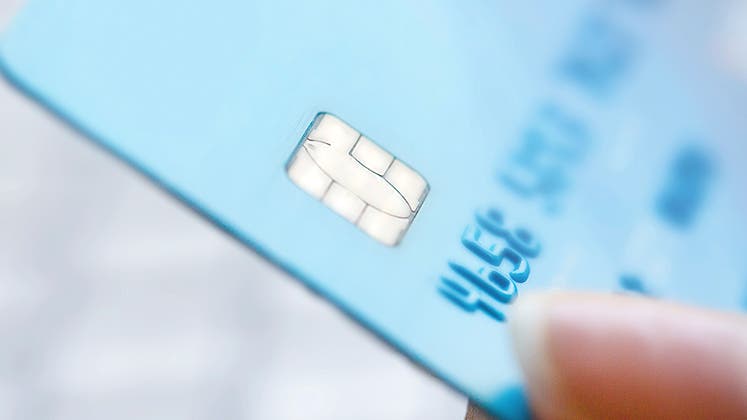 That little gold chip embedded in your new debit card may not look like much, but it will mean big changes in the way you check out at the register — and how likely you are to be hit by fraud.

What does the chip do anyway?

Built around a standard called “EMV” (short for Europay, MasterCard and Visa, the 3 payment networks that spearheaded it), the chip contains a tiny microprocessor that:

The chip can communicate with a payment terminal by being swiped like a regular card or dipped into a slot. Some chips also will be able to make a “contactless” payment from a short distance away.

If you haven’t gotten a chipped card yet, you may soon. More than 4 out of every 10 debit cards in the U.S. are going to be chipped by the end of 2015, according to Aite Group, a financial industry research and consulting firm.

“From this point forward, you will see most banks issuing EMV-capable cards,” says Julie Conroy, research director at Aite. “The smaller banks are a little bit further behind in the reissuance process.”

Still, it will be a while before most payment terminals require you to dip your card rather than swipe, Conroy says. 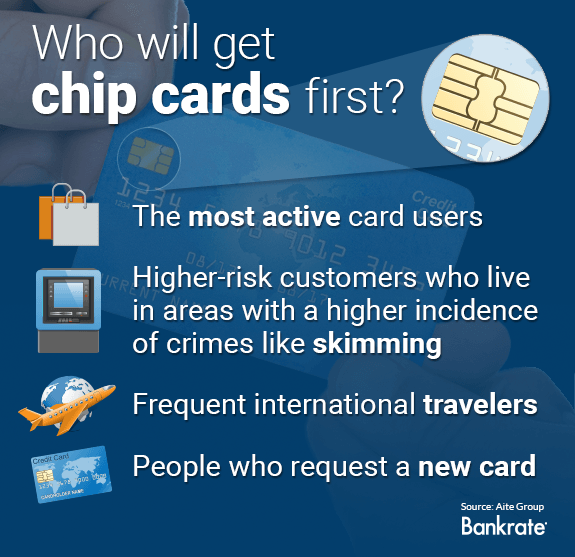 Why the switch? The biggest driver behind the move to chip debit cards is rampant debit card fraud.

A 2014 poll by ACI Worldwide and Aite Group found that 1 in 5 Americans had experienced debit card fraud in the past 5 years, and Aite data from 2010 put the annual cost for U.S. card fraud at about $8.6 billion a year.

Frequent data breaches that expose consumers’ data have only added fuel to the fire. A 2014 report by Javelin Strategy & Research found 46% of U.S. consumers notified that their data was exposed in a data breach in 2013 went on to experience debit card fraud.

If you suspect your financial data has been compromised, check your credit report for suspicious activity. Get yours for free at myBankrate.

“In the current environment, all the criminals have to do is take that card information and they can create a card, or they can use any gift card that they get off the rack and put a new card number on the mag stripe, and then use it to conduct unauthorized transactions,” says Doug Johnson, senior vice president of payments and cybersecurity policy at the American Bankers Association.

“It becomes next to impossible for criminals to then just take all the data that was compromised in the Target breach and make a bunch of counterfeit cards because they wouldn’t be able to replicate that dynamic transaction code that’s generated by the chip,” Aite’s Conroy says.

To the extent that EMV cards can prevent some types of fraud, it may be smart for consumers to get their hands on one as soon as possible.

The impact of debit card fraud can range from annoying to catastrophic, depending on your financial circumstances. Thanks to consumer protection laws, most victims eventually will get their money back, as long as they report the problem in a timely manner. But they may have to wait until after the bank or credit union investigates the matter, leaving them scrambling to pay bills.

Also, if you don’t report debit card fraud fast enough, banks may not be obligated to reimburse all — or even some — of your money.

If you want a chip debit card, you might be able to get one just by asking your bank, Conroy says.

“If the bank has the capability to issue EMV cards at this point, then most of them are able to honor customer requests,” she says.

Chip cards may help some consumers avoid falling victim to fraud, but that doesn’t mean debit card fraud will go away, says Bob Hunt, vice president and director of the Payment Cards Center at the Federal Reserve Bank of Philadelphia.

“It is important to understand that, at present, EMV is not a solution to the entire problem of data breaches and fraudulent transactions,” Hunt says. “This is particularly true for card-not-present transactions, such as purchases made on the Internet.”

Many countries that have switched to EMV cards have seen fraudulent debit purchases made in person drop substantially, but that drop was accompanied by a surge in so-called card-not-present fraud conducted online, Johnson says, and that will probably be the case in the U.S. as well.

1 in 5 Americans has experienced debit card fraud in the past 5 years.

“EMV is very effective at preventing counterfeit card use, but it does nothing to encrypt the data once it gets in the merchant’s system,” says Conroy.

Merchants get a deadline

Banks pay the biggest tab for debit card fraud, so you can understand why they would want to push forward with an expensive new card standard to stop fraud.

“Merchants are resistant … because you need a different reader, and the readers are fairly expensive,” Hughes says.

The total tab to replace point-of-sale terminals could reach $6.75 billion, according to Javelin.

That’s why the major card networks will stage a “liability shift” to prod merchants into upgrading to EMV. After Oct. 1, if a counterfeit debit card purchase happens with a chip debit card because a merchant failed to upgrade, the merchant, not the bank, will be responsible, ABA’s Johnson says.

ATMs and gas station card readers will follow in October 2017.

100% adoption will be a long time coming

Card networks hope this will be enough to persuade merchants to make the switch, but it could be a while, especially for smaller merchants. Aite Group is projecting that just under 6 in 10 payment terminals in the U.S. will be EMV-enabled by the end of 2015.

“The big merchants are going to be ready to go by the liability-shift date,” Conroy says. “Many of them are kicking and screaming all the way because merchants aren’t crazy about this essentially unfunded expense that got handed to them. Smaller merchants will absolutely trail, though.”