Thanks to the Federal Reserve, short-term interest rates are going up again.

If you’re a borrower, cue the violins. But if you’re focused on saving money, you have something to gain. History shows us that as the Fed pushes up interest rates, money market account rates and CD yields eventually tend to move up as well.

But deposit rates have barely moved in recent years. Today, the average 1-year CD yield is 0.58 percent APY, according to Bankrate’s national survey of banks and thrifts. In December 2015, it was 0.27 percent APY. Within the same time frame, there have been seven quarter-point increases of the federal funds rate.

“A lot of commercial banks aren’t really raising their rates because they have a ton of deposits from their business clients,” says Robert Frick, corporate economist at Navy Federal Credit Union. “So if you don’t need the money, then there’s no incentive for you to raise your rates. It’s just a supply and demand situation.”

How the rates match up

Generally, there’s a positive correlation between the effective federal funds rate and the average 12-month CD yield. When the Fed raises rates, CD yields are going up. The opposite happens when the Fed lowers rates, says Greg McBride, CFA, Bankrate’s chief financial analyst.

The same can be said for the average money market account yield, although sometimes the correlation is weak.

But that doesn’t mean deposit rates and the effective federal funds rate move at the same pace. After the Fed cut interest rates to near zero in late 2008, deposit rates didn’t fall nearly as dramatically. It took a while for 1-year CD rates and money market account yields to come down.

“There was some modest increase in rates because financial institutions needed the cash,” Frick says. “The whole financial system was crippled for a time.” 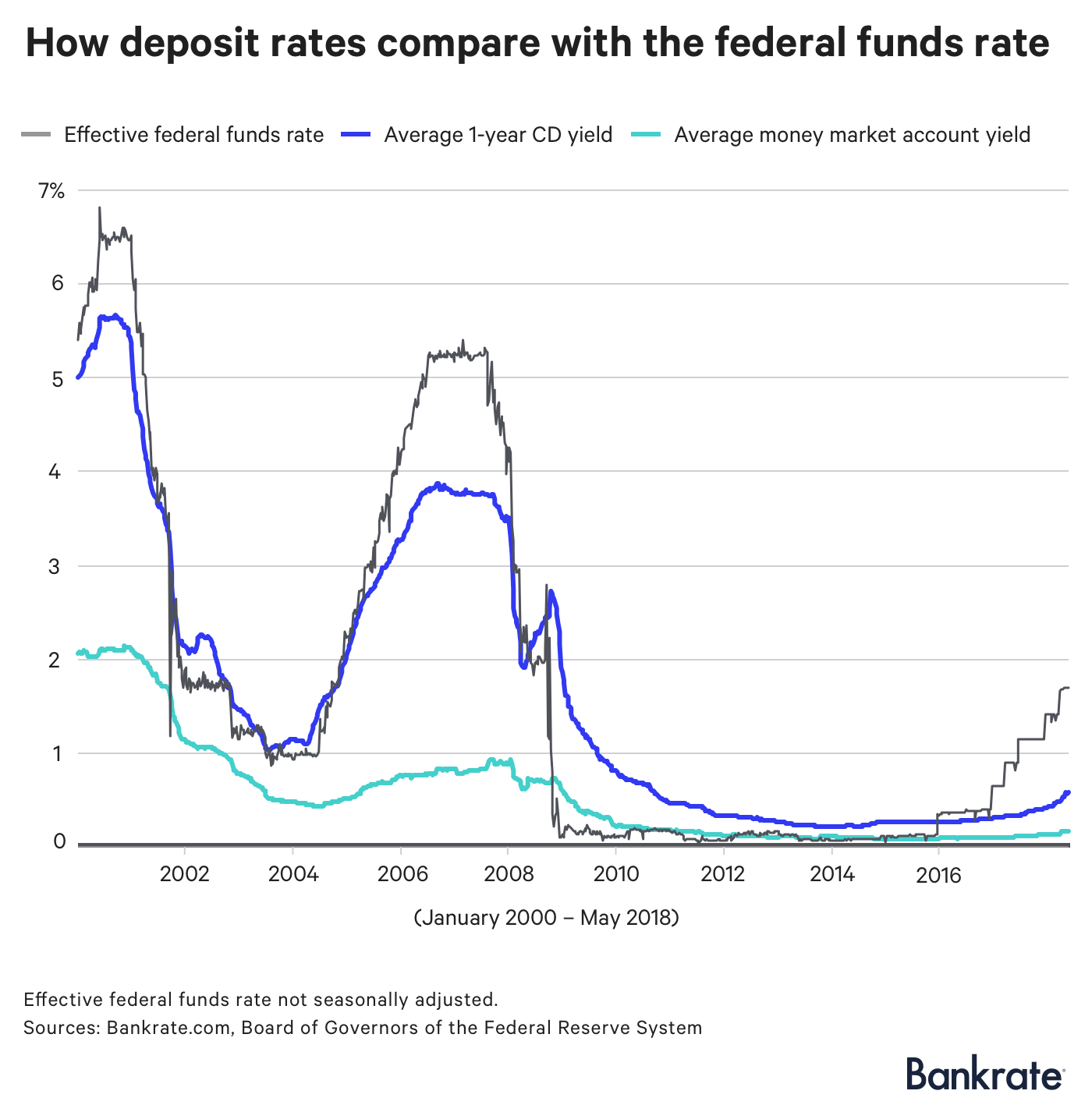 There’s typically a lag between when the Fed adjusts its key interest rate and when banks and credit unions react.

Financial institutions tend to move more slowly when there’s a rate hike rather than a dip in the federal funds rate, says Brittany Kleinpaste, the American Bankers Association’s vice president of economic policy and research.

“When rates increase, you see the same reaction between the target rate and the effective rate,” she says. “But historically we see that the loan and deposit rates, they increase, but at a further delayed rate than with the decline.”

Uncertainty regarding issues like tax reform has made some banks hesitant to bump up their rates, Kleinpaste says.

And a lot of banks and credit unions don’t want to raise their deposit rates too quickly because the cost of funds can rise much faster than the yield they’re making on their loans or investments, says Steven Rick, CUNA Mutual Group’s chief economist.

“It’s basically just to minimize any earnings decline in a rising rate environment,” he says.

Why your bank isn’t raising rates

Banks and credit unions take many factors into account before deciding whether to raise deposit rates. How badly they need money to lend out usually comes into play.

“Every deposit dollar they’ve taken in, they’ve loaned it out,” Rick says.

When the demand for loans is strong, institutions need more deposits. That’s why some credit unions with high loan-to-deposit ratios are increasing their deposit rates. On the flip side, if an institution doesn’t need more money to make more loans, it’s not going to push up deposit rates.

“Commercial banks are flush and so they’re lagging in raising their rates,” says Frick from Navy Federal. “But when they need the money, when business picks up more and they need that money to land, then they’ll certainly get back in the game and raise rates more aggressively.”

Besides considering their funding needs and financial situation, banks and credit unions often look to their competitors before deciding whether to raise rates.

It pays to save

Real interest rates remain low, so some savers may not feel like they’re winning yet. But just be patient. Since the Fed is expected to continue raising rates, the future is bright for anyone growing their savings. Deposit rates might even outpace the central bank’s benchmark rate.

“As competition for money heats up, you can find deposit rates (that) increase beyond a correlation to the fed funds rate,” Frick says.