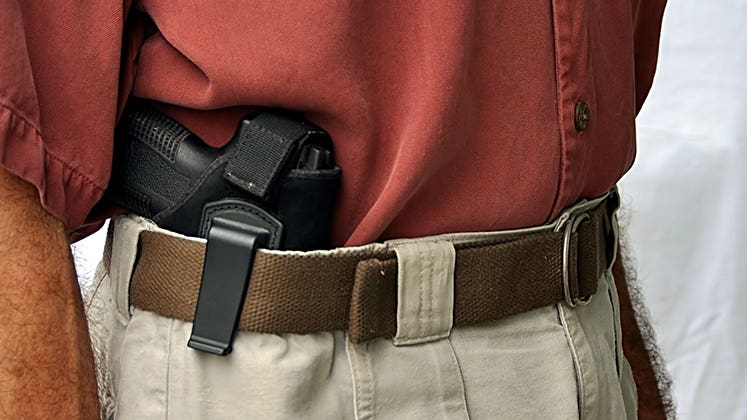 U.S. states have issued more than 11 million permits to carry a concealed weapon, according to a 2014 study by the Crime Prevention Research Center.

That’s probably a conservative estimate. Four states — Alaska, Arizona, Vermont and Wyoming — and most of Montana don’t require a permit, according to the center. The number of state-issued permits has been on the rise since 2012. And some people might choose to carry a concealed weapon without a permit even where one is required.

“It’s difficult when it’s concealed, which raises the issue that there may be a lot of people carrying guns in banks and we don’t realize it,” Cutilletta says.

According to the law center database, Montana is the only state that has a specific law at the nexus of concealed weapons and banks. The state prohibits any person, regardless of whether he or she has a permit, to carry a concealed weapon into a bank, credit union, savings and loan institution or similar business. An exception permits a concealed-carry weapon at an ATM, bank drive-up window or unstaffed night depository. A bank branch in a mall, grocery store or other public place is also concealed-carry territory unless the gun carrier is within the bank’s enclosure or using its services.

Municipalities might also have laws that govern whether it’s permissible to carry a concealed weapon into a bank.

Though permits might be pervasive, the percentage of gun owners who actually carry a gun every day is probably quite small, says Ladd Everitt, a spokesman at the Coalition to Stop Gun Violence, an advocacy organization in Washington, D.C.

Still, Everitt says, “There is a segment that wants to be able to bring their gun everywhere, whether it’s a bank, a child day care center, a K-12 school. You name it.”

“We advocate carrying your firearm any place you legally can carry it,” Michalowski says. “You’re carrying it for self-defense, for the possibility that something might happen — not the probability.”

Risk of injury during robbery is greater

“It’s certainly not something we would encourage,” Johnson says. “What you’d be doing would be putting other people at risk.”

Rosemary Erickson agrees. As president of Athena Research Corp., a retail security consulting firm in Coral Gables, Florida, she characterizes people who carry weapons, whether open or concealed, as a serious problem for banks.

“The reason they’re armed is that their intent is to fight back,” she says. “If you’re next to the guy who pulls out that gun, it changes the dynamics of the situation. If there is any resistance (during a robbery), you are much more likely to be injured. The most active resistance you can have is returning gunfire.”

Everitt says the risk might be greatest in states that allow people to carry a gun with no permit, background check, screening or training in how to handle a weapon.

“In those states, people would be walking into banks legally carrying guns and you would have no idea what their background is,” Everitt says. “Only a madman would see that as a policy that is going to make banks safer. What you’ll end up having is more incidents involving guns inside banks.”

Banks can establish policies and post signs to prohibit open or concealed weapons inside their buildings as a matter of private property rights. However, that authority doesn’t stretch very far.

“Banks can have different policies with whether or not a concealed carry is something that they will allow or not. But if it is a concealed carry, you may not know that a customer has a gun,” Johnson says.

“In some states, a private business will be able to post such a sign, and if they discover that someone had indeed brought a gun onto the premises, they can have that person removed, but very often that will carry no criminal penalty,” Everitt says. “There is very little deterrent.”

Michalowski says the concealed carry association encourages its members to respect policies and posted signs that prohibit weapons. Instead, concealed carriers are encouraged to leave their guns locked in their vehicle.

Still, that respect comes with a warning for banks and other businesses that don’t welcome firearms.

“If some place is ‘posted’ that it’s off-limits for whatever reason, whether it be by local ordinance or the policy of the business, we encourage our members, and indeed everybody who carries concealed, to honor those policies,” Michalowski says. “But at the same time, we also encourage our people to find other places to do business. If you don’t want our guns, you don’t want our money.”