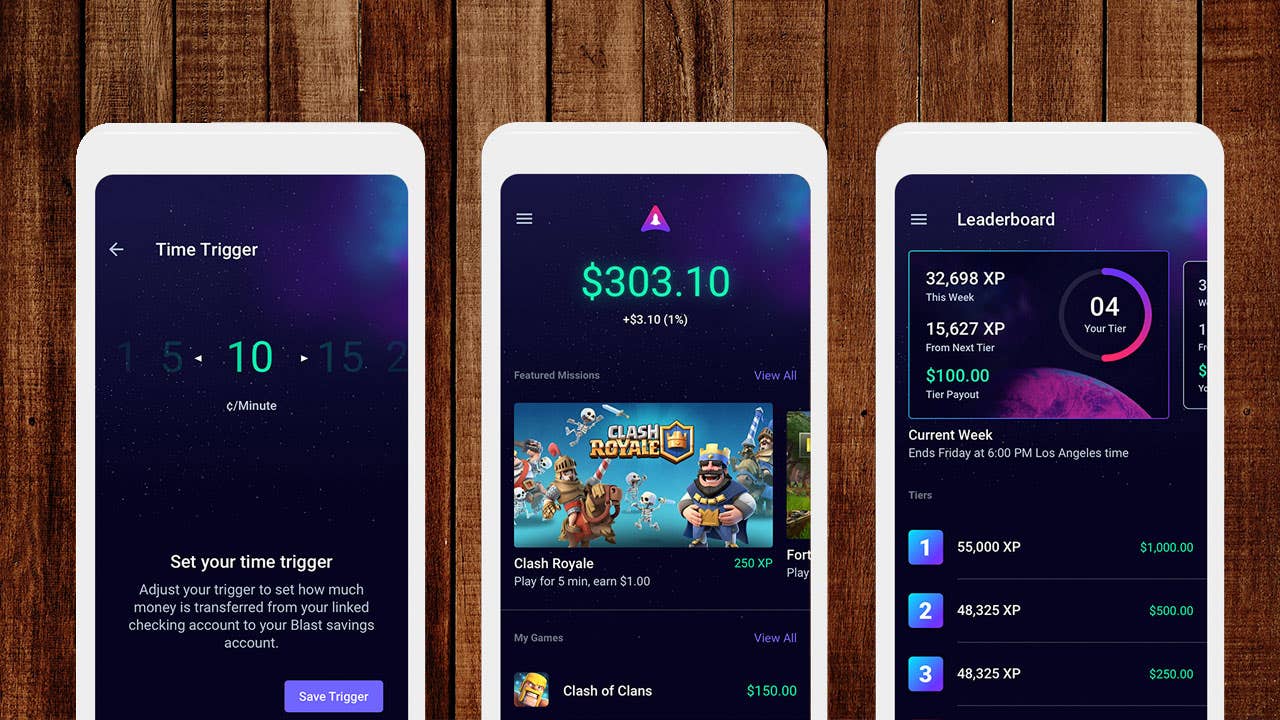 Sure, options abound. But setting aside money probably sounds about as thrilling as eating unseasoned vegetables or as daunting as becoming a pop star. Most Americans don’t have enough savings to cover a $1,000 emergency.

But a handful of tech-savvy companies are hoping to change your behavior by making the chore easier and breezier. Some, like Digit and USAA, will automatically move money into your savings based on what their technology thinks you can afford. Qapital, for another, lets you set up savings rules, so that the app moves money, say, every Sunday on your behalf.

In July, a new micro-savings app launched for the 160 million gamers in America: Blast, the name of the app, will move a little bit of your money into a savings account while you play games, like Candy Crush or Clash Royale.

“We can make it fun and easy and rewarding to a lot of people,” says Armin Collosi, vice president of business development at Blast.

The idea of making savings jazzier to inspire discipline is not new. But rather than create a new game, Blast works in the background of games you already like to play.

Stessa Cohen, a research director at Gartner, sees this approach as a potential advantage. “If you are a serious gamer looking for a way to save money and get some control of (your) finances, this might be a way to help you do that,” Cohen says.

Blast works like this: You download the app, create an account and link your checking account to it. Then, you play games, and the app will move money into savings based on your preferences, like how long you play a game. And ta da: You’re tucking away tiny amounts of money while doing something you like.

Through Blast, you can also make money for completing missions, like destroying five enemy champions in League of Legends. The amount of money a person can earn via missions will vary based on factors like how long she plays and her skill level. There’s also a chance to compete with fellow Blast users to win a weekly cash drawing of up to $1,000.

The money you put aside or win through Blast is held at Wells Fargo in an FDIC-insured account earning 1 percent APY. You can move money back into your linked checking account, but expect withdrawal transfers to take three to five days.

Blast already works on games available on Google Play Store. Now, the startup is working on making its app available on iOS. “It’s not that far away,” Collosi says.

Blast is free to use and there is no fee to open an account. The startup will fund rewards that gamers can win from video game companies.

It sounds fun. But will it work?

The startup’s entrance underscores a growing trend in financial services: making something that is perceived as dull into something, well, more pleasurable.

“Why can’t (savings) be fun and engaging and smoothly automated?” asks Nick Maynard, a senior vice president at Commonwealth, an organization that aims to help people become more financially secure.

Commonwealth has worked with a number of firms to rethink the ways people engage with savings — ranging from the chance to win a prize to earning badges for savings deposits. While more research needs to be done, early results are promising.

Case in point: Walmart’s MoneyCard, a program Commonwealth helped design, adds excitement to savings by riffing on lottery principles: Users have a chance to win a pot of cash when they save. About a year after launching the program, users were already saving about 35 percent more.

There’s also anecdotical evidence that making savings more fun is effective. As one of Commonwealth beta testers of a gamified savings app put it: “You save a dollar, and (SavingsQuest) tells you that you did a great job. People don’t think saving a dollar is a big deal, but when it’s hard to put money aside because everything is always coming up, it is a big deal.”

Then again, recent research underscored just how hard it is to keep savings, as savings. The report found that automatically enrolling workers in 401(k) plans boosts participation. However, it also found that those same workers are tapping into the money prior to retiring.

Should you play with your money?

Only time will tell how effective Blast is at getting gamers to save. But if you’re struggling to save and like to play games, consider trying Blast. It could help you begin a new habit.

But also consider your gaming habits. Do you make in-app purchases while you’re slaying dragons? If you do, you could end up spending more than you save.

Or, perhaps you need to boost your income to afford your monthly bills. Then, using something like Streamlabs, which helps you livestream your gameplay to generate a source of income, might best suit your needs.

Whatever app you choose, stay savvy about the data they are collecting from you. Also look for whether there’s a support number or a chatbot to interact with should concerns come up. And keep in mind: Options are good because one size does not fit all.

“There is not a magic bullet to helping people save,” Maynard says.