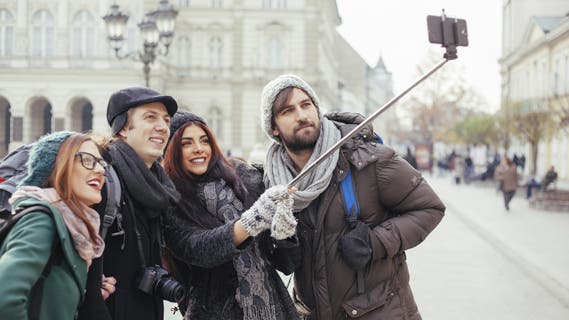 Thinking of visiting a Disney resort this summer?

Better leave your selfie stick behind.

Selfie sticks have been banned for insurance liability reasons at Walt Disney World theme parks, water parks and the Disney Quest gaming attraction in Orlando, Florida, as well as at Disneyland in California and Disney parks in Hong Kong and Paris.

Disney spokeswoman Kim Prunty told the Orlando Sentinel that the telescoping smartphone holders have become “a growing safety concern for both our guests and cast.”

But don’t blame the Magic Kingdom alone for robbing millions of the magic of this new iteration of ego gratification. Selfie sticks also have been banned from:

Why? I’ll yield the floor to the rangers at Lake Tahoe on the California-Nevada border, who report that the growing number of tourists turning their backs to take selfies with bears is “presenting a safety issue.” Ya think?!?

The trend even prompted Pizza Hut to post a tongue-in-cheek video warning against the dangers of selfie-stick abuse.

Museums in particular have long banned the use of flash photography, which over time can degrade iconic paintings. But the selfie stick presents the far greater danger of narcissists windmilling around priceless masterpieces for just the right light in which to commemorate their presence on the planet.

While it’s unlikely that the popularity of selfies or selfie sticks will wane anytime soon, the liability cost of having visitors or customers blindly backpedaling and pole-ing in public places could cause more landmarks and businesses to retract the welcome mat.

Here’s why you should avoid posting paycheck selfies.