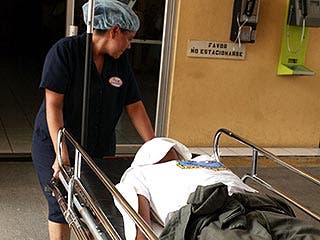 During six months in Chile while interning for a nonprofit organization, a 20-something man we’ll call Lucas contracted scabies. The microscopic mite infestation drove Lucas — who asked that we not use his real name — to seek treatment at a free local clinic.

Before leaving the U.S., Lucas had opted against purchasing supplemental travel medical insurance, which would have covered his care at a hospital. Like many people traveling abroad, he chose to play the medical odds.

A twisted ankle, common cold or routine aches and pains might be addressed in a foreign land with the help of a local pharmacy and perhaps a good dictionary in the native language.

“It’s when you have something catastrophic, or need to be moved to an area with a higher standard of care, that having a travel medical insurance policy can really make the difference,” he says.

Many vacationers are familiar with travel insurance, which is usually offered while purchasing an airline ticket or cruise. Such policies can be helpful to recoup the costs of lost luggage or a change in plans.

While some people are willing to take chances, travelers with medical conditions or who engage in high-risk activities might want to make sure any surprise trips to an emergency room won’t crimp their finances long after they’ve returned home.

Picks up where health insurance leaves off

When you travel, your health insurance likely will offer basic coverage for emergencies outside the U.S.

Some policies even have a clause for emergency evacuation (also known as “air ambulance”) that will reimburse a patient for the cost of a flight from a remote location to a hospital with a higher level of care, Wyss says.

But your regular health insurance provider “probably doesn’t have a network outside the U.S.,” notes Brendan Sharkey, director of individual product sales for GeoBlue Travel Insurance, the travel health insurance arm of Blue Cross/Blue Shield. “This gets complicated not only when trying to find the best resources, but also when struggling with paperwork while filing a claim.”

Travel health risks can be far from exotic

As Lucas found out, the health risks for travelers can include more than unexpected medical emergencies such as deadly snakebites, serious crashes or malaria.

Sharkey says the claims he and his colleagues see most frequently are for flare-ups of chronic health conditions.

“Diabetes or asthma — those are the things that can spiral out of control when someone is traveling,” he says. “Someone with a heart condition, who’s dealing with sleep and dietary changes, more physical exertion than usual, walking all along hilly streets to discover a new city — sometimes people will push themselves too far.”

The birth of Sharkey’s son in Australia several years ago is a perfect example of a fairly ordinary medical issue that can become critical. Sharkey hadn’t yet started working for GeoBlue, and the couple opted to use the public health care system during the pregnancy and delivery.

“My wife’s roommate in the hospital was an inmate of the local prison, shackled to the bed with a guard standing over her,” he says.

There was no epidural; a midwife alone began the delivery, and when complications arose, Sharkey had to track down the doctor who was overseeing five simultaneous deliveries.

“Had we had insurance,” he says, “we would have had private care, and it would have been different than this white-knuckle ride.”

Policies for less than $20 per week

The costs of supplemental travel medical insurance policies can vary greatly, but are determined by the length and destination of the trip and the age of the traveler.

Coverage can be fairly inexpensive — less than the cost of checking a bag.

For example, a 40-something traveler could spend less than $20 per week for a policy with a $500 deductible that would provide up to $500,000 in medical insurance for accidents or illness and include medical evacuation coverage.

Buy before you leave

“If you’re a short-term traveler or backpacker looking to buy a policy last-minute because you’re already showing symptoms, it’s too late,” he says. “You’re going to be basically uninsurable.”

The fine print on exclusions

Some legitimate travel medical insurance policies won’t cover a traveler who is injured due to an act of terrorism, especially if that act occurs in a country with a State Department travel alert in place.

Others will deny claims for a pre-existing condition, even if that condition has been asymptomatic, undiagnosed and untreated before the policy was purchased.

Before you start shopping for travel medical insurance, call your existing health insurance company to determine if it includes any international coverage. If not, ask your insurer if it sells supplemental travel medical policies or if it partners with another provider that does.