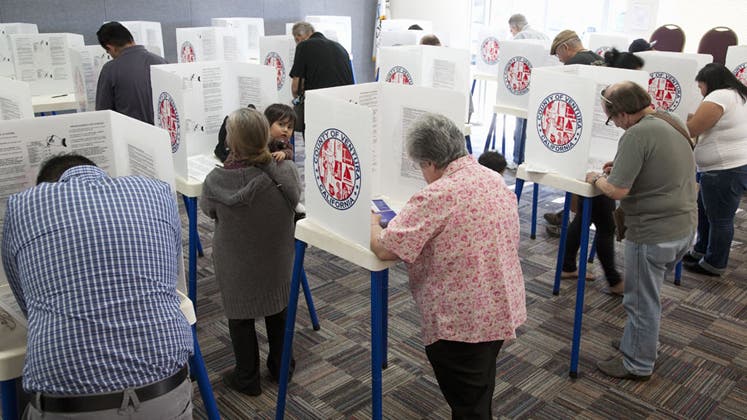 Though more than half of Americans would like to see changes made to the Affordable Care Act, the national mood toward Obamacare will most likely be a contributing factor rather than a game-changer in this fall’s elections, according to the latest Bankrate Health Insurance Pulse survey.

Asked what action the new Congress should take on health reform following the midterm elections, 52 percent said they’d like to see the ACA undergo major or minor changes, 30 percent would repeal it and just 12 percent would keep it intact. When Bankrate’s previous Pulse surveys offered just two options — keep Obamacare or repeal it — responses were evenly split.

A larger majority said the law will influence the way they vote in November’s races for Congress, but the results don’t spell a mandate for any particular political party.

How will your feelings about the Affordable Care Act affect any vote you cast in this year’s elections for the U.S. House?

After a new Congress is elected in November, what would you like it to do with the Affordable Care Act?

Experts: Obamacare will be on voters’ minds

“I think Obamacare is a midterm issue; I don’t think it’s the issue,” says Dante Scala, a political science professor at the University of New Hampshire.

“In these results, you’ve got 8 out of 10 Republicans saying, ‘Either make major changes or repeal,'” he notes, “7 out of 10 Democrats saying, ‘Either keep it or tweak it a little,’ and independents, who are evenly divided among the options. This seems to be an issue on which people’s opinions have been settled for some time.”

Peter Kochenburger, executive director of the Insurance Law Center of the University of Connecticut School of Law, notes that the desire for change could cut both ways.

“While my first assumption is that those who want to see major changes think that the ACA is a very bad thing but want to keep a few components, perhaps a sizable percentage of them want to expand the reach of the ACA beyond where it is,” he says.

Not necessarily a winner for GOP or Dems

It’s unclear whether feelings about health reform will favor either major political party this fall.

More than two-thirds of Americans (68 percent) said Obamacare will be a major or minor factor in how they cast their vote for the U.S. House of Representatives. But when the members of that group were asked how they might lean, 32 percent said they’d be likely to vote Republican, 26 percent would be inclined to vote for a Democrat, and 35 percent said party would make no difference.

“The Affordable Care Act is a factor in people’s voting decisions,” he adds, “but I was never convinced this was going to be an up-or-down election on Obamacare. I don’t see anything in these results that persuade me otherwise.”

How we assess health insurance ‘situation’

Asked whether their individual health insurance situation is better or worse than a year ago, 16 percent said it has improved, double the 8 percent showing in the first Pulse survey last August.

Scala has little doubt what’s behind that increase.

“It seems to coincide with the fact that, despite the early problems with the (HealthCare.gov) website, we certainly have seen a large number of people sign up for health care under the Affordable Care Act,” he says, adding that many of those people had been uninsured.

That said, Scala predicts a different response group will likely have the most impact on the midterm elections. He points to the survey’s finding that a majority — 61 percent — say their health insurance situation is “about the same” as it was a year ago.

“This whole idea that the midterms were going to be a referendum on Obamacare never held a lot of water with me because, for a lot of people, things didn’t change,” he says. “It’s not going to rise to the level of a pocketbook issue when people aren’t feeling like their pocketbook is being affected in any significant way.”

Medicaid a factor in some states

Kochenburger says the midterm outcomes also could depend on whether a state has adopted or rejected the expansion of Medicaid under the ACA.

“In states that accepted Medicaid expansion, millions of people are better off,” he says. “Kentucky, for example, was not happy with the Affordable Care Act overall — a lot of people didn’t support it. But once it became the law of the land … they weren’t going to ignore the people who needed it just because of an ideology, so they expanded it.”

Bankrate’s Health Insurance Pulse survey was conducted June 19-22 by Princeton Survey Research Associates International with a nationally representative sample of 1,003 adults living in the continental United States. The margin of sampling error is plus or minus 3.6 percentage points.