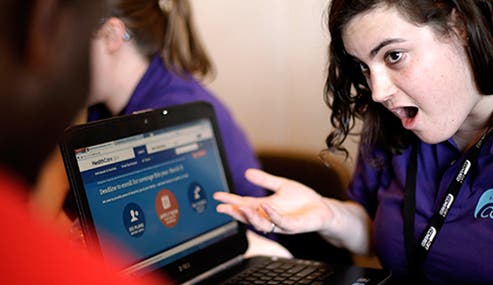 While Americans remain deeply divided on the merits of the Affordable Care Act and skeptical about health insurance exchanges, they’re receptive to Obamacare provisions that could free them to change jobs or retire early, according to the latest Bankrate Health Insurance Pulse survey.

Confusion at the heart of hard feelings?

Tim Jost, a health law professor at Washington and Lee University School of Law in Lexington, Virginia, attributes the divide to widespread public confusion about a law that has little direct impact on the many Americans who are insured through their employer. That, he says, has led some to blame a host of unrelated ills on Obamacare.

“A very large proportion of the American population is misinformed as to what’s in the Affordable Care Act,” Jost says. “So when they see that their premiums are going up, their employer contribution is going down, their cost sharing is going up and their employers are thinking about defined contribution plans, the natural tendency is to blame all of that on the Affordable Care Act.”

He adds: “But all of that happened largely outside the Affordable Care Act and would have happened anyway.”

What kind of impact do you think the Affordable Care Act has had on the country so far?

If you are currently insured through work and could get affordable health insurance not linked to your job, would that make you more or less likely to retire early, or would it make no difference?

The insured don’t see anything for them

Jonathan Oberlander, professor and vice chair of social medicine and health policy at the University of North Carolina-Chapel Hill, says the focus on enrolling the uninsured may have left many of those who are not in that camp out of the loop.

“The findings show two things: how deeply set many views are about Obamacare, and that the administration has been unable to persuade the insured that Obamacare is in their interest and that they have much to gain by it,” he says.

When the survey turned to the issue of “job lock,” in which workers cling to a job for its health plan, feelings toward health insurance reform suddenly seemed to improve.

By nearly 3-to-1 (23 percent to 8 percent), insured Americans said they’d jump at the chance to change jobs or retire early if they could get affordable health care that was not employer-based, one of Obamacare’s core offerings. However, nearly two-thirds of those surveyed (65 percent) didn’t think it would affect their decision either way.

“It’s interesting that a quarter of the population thinks that it’s a significant issue, because I really believe it is,” Jost says.

Some may ultimately decide to keep working

An estimate earlier this year from the nonpartisan Congressional Budget Office said the availability of health insurance via the Affordable Care Act could cause the equivalent of 2.5 million workers to leave the labor force. “That’s going to have a major impact on productivity, innovation and entrepreneurialism,” says Jost.

But Oberlander cautions that the higher premiums and out-of-pocket costs in the exchange’s health plans available to older Americans may not make early retirement a no-brainer.

“The reality is, when they actually look up the health insurance policies that they are qualified for, what it covers and how much it costs, they would probably stay with their jobs,” he says.

If Americans seem entrenched in their perceptions about Obamacare, they are less so in their impressions of the new health exchanges, the online marketplaces ushered in nationwide by the law.

While those who dislike the idea of being forced to shop for health insurance through an exchange outnumber those who welcome it by a 2-to-1 ratio (30 percent to 14 percent), more than half (52 percent) shrugged off the issue as inconsequential.

“This is probably tapping into anxiety about changing health insurance and frustration over the exchanges,” says Oberlander. “Most people with employer-sponsored coverage like where they are and don’t want to move. That’s been true for a long time and is still true.”

Exchanges may be a mystery to many

Jost says the shrug factor may indicate respondents weren’t familiar enough with the new exchanges to view them as a threat to the health insurance they know, if not love.

“My personal feeling is that we’re going to have employer coverage around for a long time,” he says. “Employer coverage is such an ingrained part of our health care system. When you’re looking for a job, you want health insurance.”

Still, a recent analysis by research firm S&P Capital IQ predicted that by 2020, most Americans — including 90 percent of those currently insured through an employer — will need to shop for their health insurance using the Obamacare exchanges. Major companies could save $700 billion by shifting workers to the marketplaces, the report said.

Percentage of uninsured at new low

On an optimistic note, the percentage of uninsured respondents — 11 percent — was the lowest since Bankrate launched the Health Insurance Pulse survey last summer.

“All the surveys tend to show that we’re headed in the right direction,” says Jost. “The number of people who are uninsured is going down, so it’s pretty hard to avoid a causal connection.”

Bankrate’s Health Insurance Pulse survey was conducted May 15-18 by Princeton Survey Research Associates International with a nationally representative sample of 1,000 adults living in the continental United States. The margin of sampling error is plus or minus 3.5 percentage points.