What’s your biggest challenge in retirement, besides making your money last for your lifetime? It’s taking retirement plan distributions in such a way as to best minimize income tax so more money is left for you.

It’s tough to make generalizations about the right way to do this because people own retirement assets in vehicles with different tax characteristics. Following are three retirement plan distribution scenarios.

In each scenario, a hypothetical couple has $600,000 in assets. To maintain their lifestyle, they need $42,000 of income per year in retirement, $24,000 of which will come from Social Security. They must rely on their retirement funds to provide income of at least $18,000 per year.

Assuming that tax rates don’t change drastically in the foreseeable future, let’s look at the best way to take distributions when retirement assets are invested in various vehicles, including pretax accounts such as traditional 401(k) plans, individual retirement accounts and pension plans; after-tax vehicles such as Roth IRAs and Roth 401(k)s; and nonretirement vehicles, such as a brokerage account containing stocks.

“The name of the game is planning. A builder doesn’t build a house without a blueprint. A retiree can’t navigate a multidecade retirement without one either. One key tool in that planning toolbox is minimizing taxation,” says Rob O’Blennis, Chartered Retirement Planning Counselor at The Retirement Planning Group in Overland Park, Kan.

Here are the three scenarios, with tips on how to take retirement plan distributions with tax efficiency in mind.

In this scenario, Bankrate’s hypothetical couple has invested all $600,000 of their nest egg in a traditional, pretax 401(k) plan and traditional IRA, or they have a traditional pension plan with annuity payments.

Scenario 2: A mix of pretax and after-tax vehicles 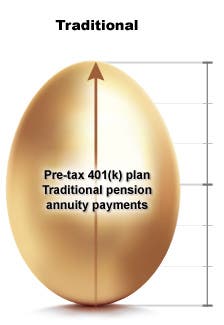 In this scenario, Bankrate’s hypothetical couple has invested all $600,000 of their nest egg in a traditional, pretax 401(k) plan and traditional IRA, or they have a traditional pension plan with annuity payments.

“This scenario has the least number of moving parts and leaves little opportunity for planning. When all your retirement savings is pretax, income over and above Social Security simply comes from your IRA,” says Rob O’Blennis, Chartered Retirement Planning Counselor at The Retirement Planning Group in Overland Park, Kan.

“This is by far the most tax-inefficient of the scenarios, as every dollar that is distributed from the retirement plans will be taxable,” says Certified Financial Planner professional Richard Reyes of The Financial Quarterback in Maitland, Fla.

Because amounts are contributed to the IRA or 401(k) plan on a pretax or tax-deferred basis, when monies come out of the plan, they will be fully taxable at the ordinary income tax rates in effect at the time of distribution. In this arrangement, Uncle Sam has allowed you to delay paying tax on your contributions, as well as the earnings on those contributions, until you take them out.

When it’s time to take retirement plan distributions, however, the government wants its tax money. It’s the same with distributions coming from a defined benefit plan, otherwise known as a pension. Pension payments are taxable at the time of receipt.

For IRAs and 401(k) plans, required minimum distributions, or RMDs, take effect for everyone who owns these accounts. This rule is slightly different depending on whether you have an IRA or a 401(k). For IRAs, RMDs must begin no later than April 1 of the year following the calendar year in which you reach age 70 ½.

For defined contribution plans, RMDs must begin no later than April 1 following the later of the calendar year in which you reach age 70 ½ or at retirement. However, to take advantage of the delay to actual retirement (assuming you retire after age 70 ½), the plan itself must allow you to do so. If not, then the default rule applies.

At age 70 ½, the retiree will have to withdraw approximately 3.8 percent yearly (according to the Internal Revenue Service Uniform Lifetime RMD Table), which equates to about $30,000 per year.”

If payments come from a pension in the form of annuity payments, there’s an additional wrinkle to consider. Does it have cost-of-living adjustments? “If not, over time inflation will eat into distributions,” says Reyes.

If there are no cost-of-living adjustments, the value of the distributions remains constant over time. As prices of goods increase with inflation, the purchasing power of those dollars will go down.

With respect to assets held in a 401(k) or IRA, Dan Yu, managing principal, CFP professional and Certified Investment Management Analyst at EisnerAmper Wealth Advisors, recommends that you “make sure that the asset allocation in your accounts are addressed and adjustments made the closer you get to retirement.” By the time you approach age 70, your fixed-income holdings should range from 70 percent to 75 percent, he says.

When deciding how much of a distribution to take from a traditional IRA, it is important to determine how much tax to withhold first. “If your effective tax rate is 10 percent, you would need to withdraw $20,000 to get $18,000 after tax; the other $2,000 could be set up to go to Uncle Sam,” says Mike Piershale, Chartered Financial Consultant and president of Piershale Financial Group.

“It is critical to take into account any state income taxes, in addition to federal income taxes, to which you may be subject,” adds John Graves, author of “The 7% Solution.”

As for how much should be withdrawn annually from a portfolio, O’Blennis recommends that distributions be kept below 4 percent of total assets. “It’s easy to go above that 4 percent mark if you treat your IRA like an ATM machine.”

“It’s good to have the money in the first place,” says O’Blennis, “but having other money saved in Roths or after-tax accounts simply gives one some options.”

That brings us to our next scenario. 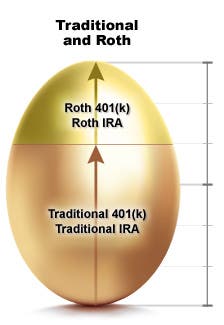 Scenario 2: A mix of pretax and after-tax vehicles

This scenario allows more opportunities for our hypothetical couple to do some more advanced tax planning. As explained in Scenario 1, any retirement plan distributions from a pretax 401(k) or traditional IRA will be taxed at ordinary income tax rates at the time of receipt.

But our couple also has investments in a Roth 401(k) plan or a Roth IRA, which allows them to do even more with their money.

“Qualified distributions from the Roth IRA will not be taxable,” says Dan Yu, managing principal, CFP professional and Certified Investment Management Analyst at EisnerAmper Wealth Advisors. A qualified retirement plan distribution from a Roth IRA must meet the following requirements:

The principal contributed to a Roth may be withdrawn at any time without penalty.

“This scenario will allow the retirees to lower their taxes over time as they will be making distributions from both a traditional IRA and a Roth IRA,” says Certified Financial Planner professional Richard Reyes of The Financial Quarterback in Maitland, Fla.

With Roth IRAs, RMDs are never required. However, with Roth 401(k)s, requirements for distributions mirror those of regular 401(k)s — they must be taken by age 70 ½ — unless you roll the account directly into a Roth IRA. In that event, RMDs are not required.

A taxpayer could just draw money from the Roth to keep taxes to a minimum, says Rob O’Blennis, Chartered Retirement Planning Counselor at The Retirement Planning Group in Overland Park, Kan. “Savvy taxpayers should determine whether they can distribute some funds from their pretax IRA with minimal tax burden and take a distribution equal to the difference from their Roth,” he adds. Doing so will minimize the taxpayers’ adjusted gross income, keeping them in the lowest tax bracket.

A mix of pretax and Roth investments helps solve this tax issue. For example, assume this couple takes monthly distributions of $650 from a traditional IRA. That works out to be taxable income of $7,800 from the pretax IRA plus $24,000 from Social Security for the year, or $31,800. This neatly comes in under the $32,000 taxable income threshold for married couples. The additional $10,200 income from a Roth IRA won’t affect the outcome because Roth distributions are not taxable.

Says O’Blennis: “It would be an error to take all needed income before age 70 ½ from the traditional IRA or 401(k) when there is plenty of money in the Roth. In this scenario, you could live entirely off the Roth and Social Security initially, then (after age 70 ½) off of the Roth, required minimum distributions from the traditional IRA or 401(k) and Social Security, and likely not see the Roth run out.”

Yu says there may be another valid reason for reserving some Roth assets. “When you pass away, assets in a Roth can provide tax-free income to a beneficiary over their lifetime.”

Mike Piershale, Chartered Financial Consultant and president of Piershale Financial Group, says keeping Roth money helps out in unexpected situations. “If you have an emergency, such as a health issue or an unexpected expense, the Roth IRA gives you tax-favorable money to tap into. Alternatively, if the only place to get additional funds is a traditional IRA, that may trigger a bump up to the next highest tax bracket.” 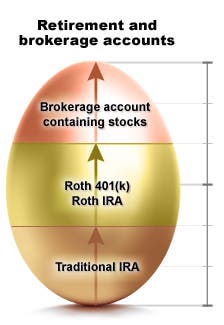 Of all three situations, this is the gold standard. It offers the most flexibility for taking retirement plan distributions.

“You should delay pretax distributions to last in this scenario,” says John Graves, author of “The 7% Solution.” “It doesn’t matter whether you take Roth distributions or sell your stocks since the tax impact will be less than if you take distributions from the traditional IRA or 401(k).”

However, not all advisers agree. “Many people want to leave their traditional IRAs completely alone until they reach age 70 ½, when in fact they may be able to take some distributions at a lower tax bracket if they take some funds in earlier years before they reach 70 ½, when forced distributions might put them in a higher bracket,” says Lynn Mayabb, CFP professional and senior managing adviser of BKD Wealth Advisors.

Under this scenario, you have the most control over your assets and the taxes you pay, says Dan Yu, managing principal, CFP professional and Certified Investment Management Analyst at EisnerAmper Wealth Advisors. “The Roth doesn’t have a required minimum distribution, so you can cherry pick when you take it.”

He suggests putting the most aggressive assets in the Roth portion of your portfolio and touching those last. Meanwhile, holding the bulk of your tax-inefficient investments, such as bonds, in a traditional IRA, makes sense since it’s taxed at ordinary rates anyway.

“The best way to approach taking distributions is to make the most of the assets,” says Mayabb. “Using a balanced approach, taking from taxable, tax-deferred and tax-free accounts can help control taxes the best and have the potential to maintain a portfolio for a longer period of time as taxes are reduced.”