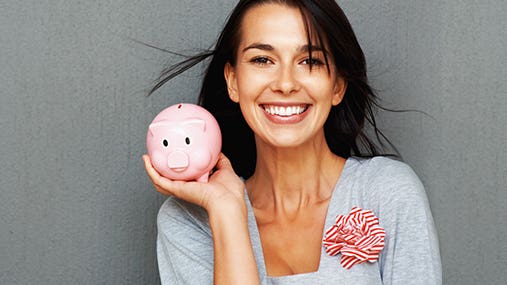 Retirement fears may loom large when your income is small. Today, 38 percent of households say they live paycheck to paycheck, according to a study by the Consumer Federation of America and the Certified Financial Planner Board of Standards. And one-third of Americans worry they’ll never be able to retire, according to a survey from Pentegra Retirement Services.

“For so many Americans, planning for retirement seems too enormous to tackle, and it feels like it is already too late,” says Rich Rausser, senior vice president at Pentegra. “But it’s not so.”

Follow these steps to save for retirement, even if you don’t make a lot.

Say “budget,” and many people run for the hills. According to Bankrate’s July 2012 Financial Security Index survey, 38 percent of Americans don’t track their spending.

“When I ask people, ‘How do you spend your money?’ they don’t know,” says CFP professional Dee Lee, author of “Women and Money.”

“They’re living with what they’ve got, from paycheck to paycheck. They aren’t planning.”

Having a firm grasp of where your money goes enables you to set some aside for emergencies and future goals. You can track your spending using apps, software such as Quicken or by hand — with pencil and paper. The only thing that matters is developing a budget that is grounded in reality.

Start with bank and credit card statements, and keep receipts for items you pay for with cash. As you look back at where the dollars went over the past month or two, assign your spending to the appropriate category — clothing, travel, car expenses.

Add a line item for emergencies. Generally, you’ll need three to six months’ worth of living expenses to pay for mishaps without reaching for credit cards or going into debt.

Your budget also should reflect your commitment to save for retirement. Don’t be discouraged if you only have a little. Twenty-five dollars a week will be worth $56,669 in 20 years, assuming a 7 percent annual return. Just be sure to start. “The first dollar you save is the most valuable,” says Rausser. “Start with 1 percent, 2 percent, 3 percent of salary. Commit to a plan of auto-escalation, each year increasing to your retirement plan by 1 percent. The numbers will move.”

Plug in fixed costs. It’s easier to stick to spending plans when expenses are steady, so build a budget with as many fixed costs as possible. For instance, heating bills rise when the temperature drops, and air-conditioning bills climb during sweltering summers. But your bank account shouldn’t be iced every time a nor’easter blows through. For a period of time, consider enrolling in your utility’s budget plan, so you pay the same amount every month — based on an average from your past use — to avoid periodic high bills that can throw budgets out of whack.

Because fees can take a big bite from your budget, it pays to evaluate how much you pay in interest and fees on your mortgage, insurance policies and credit cards at least once a year to see if you can find a better deal elsewhere. Online price comparisons at sites such as Bankrate.com make that chore relatively easy.

Cutting back on things we love is harder. Can’t live without that daily vanilla soy latte? Fine. But you’ll need to be creative about trimming elsewhere to save money.

College freshman Ben Ellenberg, 18, loved his new cellphone, but he swapped it for a prepaid plan that saved him $840 a year. He made the switch after digging post holes under the blazing sun last summer. “I worked too hard for my money,” he said.

It’s easier to save if you consider what today’s expenditure could be worth tomorrow if you invest the money instead. For instance, if Ellenberg puts his hard-earned $840 into a Roth individual retirement account, it would grow to $9,708 by the time he’s 60, assuming a 6 percent annualized return. If he saves $840 for three more summers, he’ll have $33,638, thanks to his cheaper phone.

Going green helps, too. Just ask the 78 million Americans who gave up credit cards for cash. “Sure, it’s easier to use debit cards,” says Lee, “But when you use cash, you’re going to be more likely to ask yourself, ‘Do I really need that — or do I want it?'”

Be ruthless about debt. Consumer debt “is like cancer,” says CFP professional Drew Tignanelli, president of Financial Consulate, a financial planning firm based in Hunt Valley, Md. Because interest compounds, the sooner you pay it off, the more you’ll pocket over time.

Slash the most expensive debts first, whether that’s a student loan or a credit card with a double-digit interest rate. Consider a second job to eliminate it as soon as possible, and commit to paying more than the minimum amount due.

Pocket savings you already have: Take a look at store receipts. When Michelle Malone did, she was stunned to see she had slashed more than $400 from her supermarket bill last year by using coupons and enrolling in the store’s loyalty program. Now the Connecticut mom takes the next step by transferring what she saved on groceries and gas into to a dedicated savings account. “I was looking for a way to move ahead,” she says. “I didn’t expect it to be so easy.”

It bears repeating: “Pay yourself first,” says IRA pro Ed Slott. “Pay yourself before you get your hot little hands on the money.”

If you don’t have a retirement plan at work, open one of your own. You may need a required minimum deposit to open an IRA — generally about $1,000 to $3,000 — but some banks and brokerages waive their requirement, so you can start saving with just a little. Ameritrade, for example, currently has no minimum balance for its Roth IRAs. Fidelity and Charles Schwab waive minimum opening balance requirements when you sign up for monthly direct deposits into Roth accounts.

That appealed to Rich Rausser’s son Matthew, 19. “After getting a part-time job in high school a couple of years ago, my dad recommended that I start saving. It wasn’t a ton of money, but I took his advice,” says Matthew Rausser. “The account is set up to debit $100 a month that’s automatically transferred to my Roth IRA.”

Employer plans are often your best bet, however. So if you have access to a 401(k), 403(b), or Roth 401(k) plan, enroll pronto. Earnings are stashed before they’re spent — or taxed, if you’re in a traditional 401(k) or 403(b). And most employers match a percentage of contributions, up to certain limits, but generally only if you chip in, too. So contribute enough to qualify for all of the free money available to you.

Tamara Carson, 24, is paying off debt from college, but she made a point to save for retirement — enough to get her company’s 401(k) match. As she pays off loans, she’ll boost her retirement savings. “Every dollar you contribute up to 6 percent, they’ll put in 25 cents. Over time, that’s a lot,” says Carson, who began working as a human capital consulting analyst at Deloitte Consulting in Atlanta last summer. “I have student loans, rent (and) credit card bills I’m still paying for, so it’s nice to think about being able to have a nest egg and the money I’m keeping.”