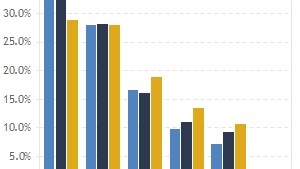 If life were a race to accumulate assets and savings, the winners would be crowned in retirement. With a lifetime to stockpile resources, some seniors’ wealth outshines the gross domestic product of small countries. Case in point: Retired movie producer David Geffen, worth $6 billion according to Forbes.com, surpassed Bermuda’s 2012 GDP of $5.5 billion.

At the other end of the spectrum, more than 9 percent of those age 65 and older lived in poverty as recently as 2012. This year, living in poverty means an annual income of $11,670 or less for a single person and $15,730 for a household of two.

Compared with all other age groups, the 65-and-older crowd has the dubious distinction of having the most pronounced income gap, according to a Bankrate analysis of a measurement of income inequality known as the “Gini Index.”

The good news is that since 2002, the population of low-income seniors has declined while the ranks of the highest earners swelled.

What’s behind the vast retirement income gap between rich and poor? Conventional wisdom puts the blame for any financial shortcomings squarely on the shoulders of the individual. But research shows that the inequality in retirement income is more than just a function of the zeal with which one saves.

With the exception of Social Security, income in retirement is largely a result of the savings an individual was able to stockpile while working. Relatively few workers still receive pensions from their employer. Large disparities in retirement income are the expected outcome, says Jack VanDerhei, director of research at the Employee Benefit Research Institute.

“Even if everyone was, in essence, putting in the same percentage of compensation, which we know is not true, mathematically we would have to end up in a situation where those in the higher income quartile the longest period of time would by definition have a larger overall prosperity in terms of retirement income,” he says.

But inequality in savings and income isn’t just a result of uneven compensation in dollars. The income disparity between the haves and have-nots in retirement is a little bit more complicated.

Not surprisingly, wealthy households tend to save more than less-prosperous folks.

“Employees with larger incomes tend to contribute a larger percentage of their salaries than do the lower incomes,” VanDerhei says.

On its face, it appears that rich people simply have sterling savings behavior compared to the lesser-compensated masses, but that may not be the case.

“If you already have a lot of money you inherited from your parents or you are just simply wealthy, there is no reason not to take advantage of the tax breaks for 401(k)s and IRAs. It does not mean that you are saving more,” says Monique Morrissey, an economist at the Economic Policy Institute. “These tax subsidies do not necessarily induce new savings; they are simply a way for high-income or wealthy people to pay less tax.

“So some of what we see in terms of the inequality does not reflect anything that normal people would consider part of our retirement system, but rather a tax shelter,” she says.

That’s not by accident; that was the purpose of 401(k) plans when they debuted circa 1980. As the primary vehicle for most people to save for retirement, the 401(k) may actually widen the retirement income gap between rich and poor.

“The tax incentive structure for retirement savings rewards higher-income wealthy folks. It does not offer nearly as much benefit for lower-income households,” says Nari Rhee, manager of research at the National Institute on Retirement Security, or NIRS.

That’s because our progressive tax system imposes higher taxes on high-income earners and lower taxes for others. People paying a high tax rate in peak earning years have a strong incentive to stick as much income as possible into a tax-deferred account. The money goes in pretax today; as withdrawals are made in retirement, it will likely be taxed at a lower rate.

The retirement system in America favors highly skilled and well-paid workers. Workplace retirement accounts — employer-sponsored plans — represent the best chance individuals have to save for retirement, but the ability to access a taxpayer-subsidized account is wholly dependent on an employer’s generosity.

Can’t people just save on their own?

There are other tax-advantaged accounts available for everyone — namely IRAs. Given their limitations, IRAs are an untenable answer to the nation’s retirement-income gap problem. The accounts allow just a fraction of the savings that can be squirreled away in an employer-sponsored plan such as a 401(k). The annual contribution limit for an IRA in 2014 is $5,500 compared with $17,500 for the 401(k). Realistically, saving $5,500 a year would be a great improvement for many people, but the tricky part is that IRAs require people to set up the account and make annual contributions.

“Any time you have to have people proactively, voluntarily save, as opposed to just automatically saving, you tend to have poorer outcomes,” says Rhee, author of the NIRS study.

Inertia stops most people from taking the initiative to open an account. So inertia can be partially blamed for the retirement income gap between rich and poor.

“Individual responsibility is important. But we are looking at a large-scale social problem. There has been a lot of research on behavioral finance, which is why you have to look at how people actually behave, not just how you wish they would behave,” she says.

Researchers studying retirement saving and investing have found that making savings automatic vastly improves the retirement picture for most people. In the United States, automating savings means that employers auto-enroll participants into 401(k) plans and put their contributions into qualified default investment options. Some states, California for instance, are designing automatic IRA programs that would require employers without a retirement plan to automatically enroll workers in a state-sponsored retirement savings program.

“If you look at the cross-national research, it is really clear that the purely voluntary systems all have poor outcomes. That is just the way it works,” Rhee says.

Simply socking away money in a bank account for 30 or 40 years won’t get most people to retirement. Some kind of investing is required to achieve a decent rate of return over time. The higher the rate of return, the more quickly savings begin to double and triple.

But investing can be a daunting proposition, and many individuals make mistakes when planning their retirement portfolios. They may invest too conservatively or too aggressively for their situation, which can have long-term consequences.

“Your average rate of return while you are investing is very much positively correlated with your probability of success,” says VanDerhei.

But, this piece of the retirement challenge — the difficulty individuals have investing — may be solved as automatic enrollment into retirement plans and default investment options such as target-date funds become the standard.

“The nice thing about that is that if you put a young person into a target-date fund, it is going to be managed in an age-appropriate fashion. It is going to be rebalanced. And once you put them in there, let us just say it is very, very sticky. Very few 401(k) participants automatically enrolled in a planned target-date fund end up moving that money out to something else,” VanDerhei says.

That’s the type of inertia that works in participants’ favor.

Employers, regulators and lawmakers are only now learning the secrets of getting an entire generation into retirement successfully. It may be a steep learning curve, but eventually the income disparities seen in today’s retirement generation could be reduced. Maybe in the future, everyone will retire into prosperity — or at the very least, into financial stability.