Millennials are faced with the internal conflict almost every day: live comfortably now, or later?

Thanks to $1.5 trillion in student loan debt, rapidly increasing health care costs and high living costs, scraping by now often can be prioritized over worrying about retiring on a beach later.

Regardless, millennials are doing a good job at prioritizing retirement savings more than other generations. But most, including millennials themselves, believe their efforts still won’t be enough.

Experts say saving 15 percent of your income should lead to comfortable retirement. Millennials are struggling to hit that target.

Only one-third of millennials currently have money saved for retirement, according to a report from the National Institute on Retirement Security. Of that one-third, they have a median amount of about $19,100 saved.

For older millennials, those values aren’t ideal. There might still be time for younger ones to ramp up their savings — but affordability is a giant barrier.

For Susan Stalte, a 26-year-old health care professional in Pennsylvania, her retirement savings are a work in progress. Each month, she puts $150 into a Roth IRA; it’s a number she admits “doesn’t feel like enough” but hopes to increase over time. She currently has about $2,500 saved.

However, Stalte says she’s often told that even having $1 million for retirement won’t suffice.

“It almost feels as if there will never be enough to save in order to retire comfortably,” she says.

Based on Stalte’s current balance and savings habits, and under the assumption that she’d earn a 7 percent annual return and like to retire at 65, Bankrate’s Roth IRA calculator shows that she will have only $392,530 by the time she’s ready to retire.

Stalte would have to nearly triple her monthly contributions to retire with a little over $1 million, considering Social Security benefits are expected to decrease over time.

When asked about her capability to triple her monthly savings, Stalte says the number is “terrifying” — but possible.

“I’ve known that I’ve had to someday invest that amount each month, but I think I was just waiting for the right time,” she says. “There will never be a right time, so better now than never. It’s very stressful to think about.”

Millennials have to choose: Live comfortably now, or later?

Some experts say retirees will need at least 80 percent of their pre-retirement income once they quit the workforce. Not everyone has the same ability as Stalte to increase their savings — a recent Prudential survey finds that 70 percent of millennials can’t.

“The issue is not the inability to plan, it is the inability to save,” says Ben T., a survey respondent quoted in the survey. “Saving money for retirement just isn’t a luxury everyone has.”

A giant factor in the inability to save more is debt. According to Harry Dalessio, head of full service solutions at Prudential, millennials are more focused on paying down their student loan and credit card debt than saving.

“They don’t believe (they can do both) at the same time,” Dalessio says.

When you put the numbers on paper, though, it’s hard to believe they can. 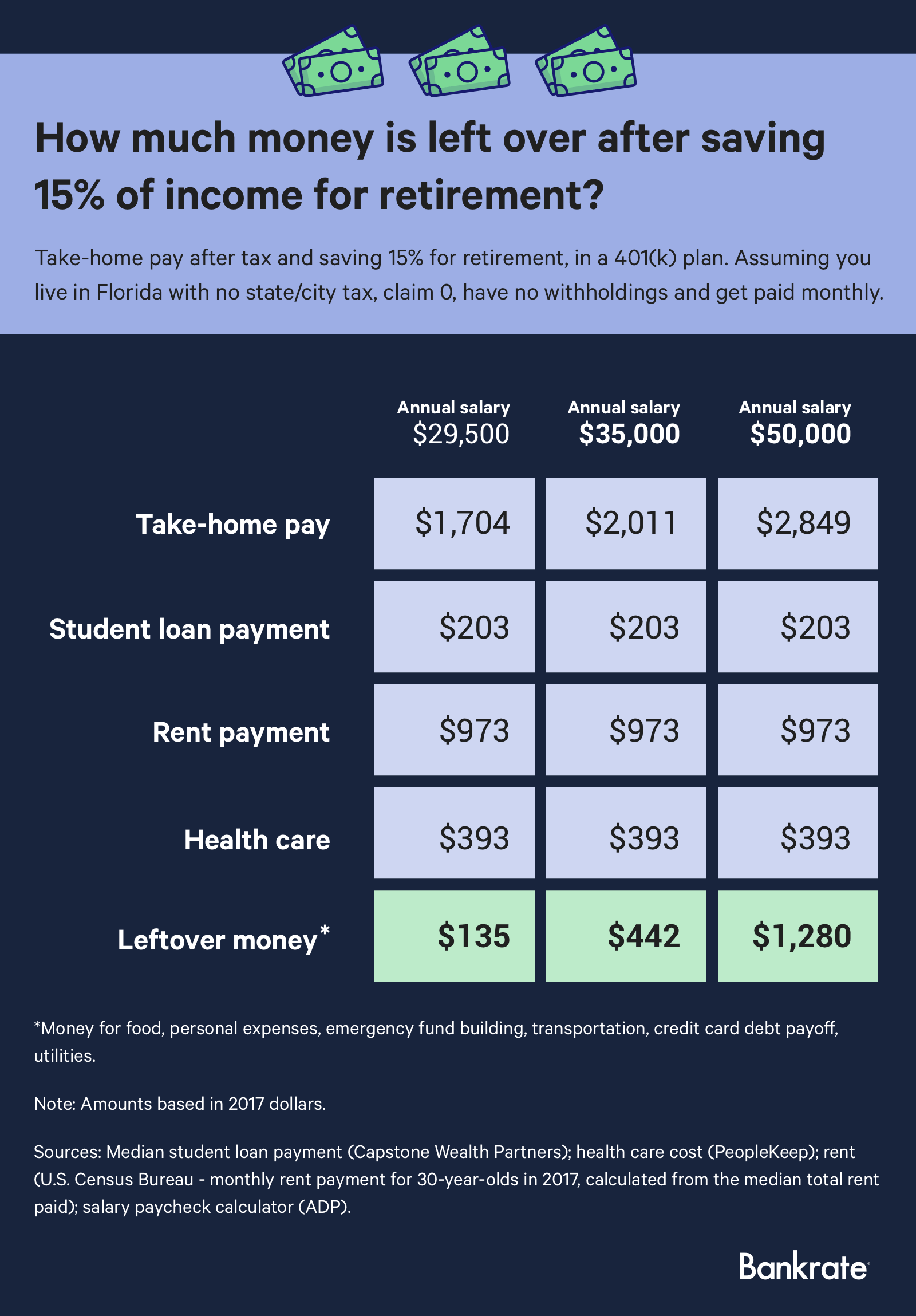 Living expenses can be overwhelming. Child care costs, health care costs and education costs are escalating — and millennials are making less than the previous two generations. In 2016, 41 percent of young men ages 25 to 34 had an annual income below $30,000, compared with 25 percent in 1975, based on 2015 dollars, according to the U.S. Census.

So, they’re forced to choose: Do they want to live comfortably now, or sacrifice for comfort down the road?

Josh Rubin, a 35-year-old millennial business owner in Sacramento, California, has chosen to embrace the now; he has almost no retirement savings. Even though he has what he thinks is a “decent” income, he cites high living costs and wanting to be happy as the main reasons he isn’t building a nest egg.

“I think my generation sees more value in enjoying life than working hard and being miserable to hope to be secure later,” Rubin says. “This doesn’t mean I spend money freely and buy things I can’t afford, but the average cost of even just rent is sky-high compared to what older generations used to have to deal with.”

It’s not that millennials aren’t sacrificing at all; they just are in ways that aren’t monetary. They’re delaying major life milestones, like homeownership, marriage and childbearing, partially because they can’t afford them.

They also fear the economic future.

As a millennial who was born in 1982, Rubin lived through the 2008 recession. He cites low faith in the long-term value of stocks and savings to be another reason he isn’t saving for his future. The Prudential survey found that 77 percent of millennials fear another global recession will take place in their lifetime — one more disruptive than that of 2008.

Bridget Fitzgerald, certified financial planner and wealth strategist at PNC Wealth Management, is 26 years old. As someone who lived through the recession, she empathizes with the dreary outlook.

“When you experience a traumatic event in childhood, it can be a weakness even as an adult,” Fitzgerald says. “The best defense is to prepare for it — save, understand how the markets work, remove emotion from your financial decisions and don’t let impulse drive you.”

Do millennials really need to catch up with retirement savings?

About 79 percent of millennials surveyed think it’s highly or somewhat likely that people will no longer be able to retire comfortably in the future.

The concept of retirement is already rapidly changing. With the disappearance of pension plans and tightened Social Security benefits, baby boomers are starting to work well past the industry-standard retirement age of 65. It’s estimated that they’ll account for almost 25 percent of the labor force by 2024.

Full retirement will likely be a thing of the past by the time millennials reach 65.

Dalessio acknowledges that there’s a retirement crisis in our country. But he adds that there are plenty of tools available, especially from employers, that can help. These tools include aid with understanding the building blocks of financial wellness. Employers are using these tools to recruit and retain all generations, but especially millennials.

They’re also implementing automatic enrollment in 401(k) plans, which enables employees to save without having to think about it.

“While there is now more of a shared responsibility for saving, many employers are still doing their part,” Dalessio says.

But he also adds that many millennials don’t fully understand their employer-sponsored plans — most of them find the information to be “complicated,” he says.

Fitzgerald agrees that there are tools available to help millennials plan for retirement, but she adds that these tools don’t leave millennials feeling optimistic about the future.

“The numbers are just unreal and can be soul-crushing,” Fitzgerald says. “What is annoying for some is that you try to save into your 401(k) and the available tools tell you that you still need to save more. That is often not an option.”

Instead of letting the pressure of industry standards bog down and discourage millennials, Fitzgerald tells her clients to think about their own specific goals for retirement. Shifting the conversation away from traditional expectations and toward an individual’s own wants and needs can lead to a more productive mindset toward saving.

“It depends on what you want to accomplish in retirement,” Fitzgerald says. “What is ‘comfortable’? What will you be doing? What are your goals? These are important, motivating questions to consider.”

And if you haven’t started saving?

“Saving is a hard choice,” she says. “Sacrifice is hard. But starting the discipline of saving early will help you accomplish your goals in the future.”

Even if those goals are untraditional.