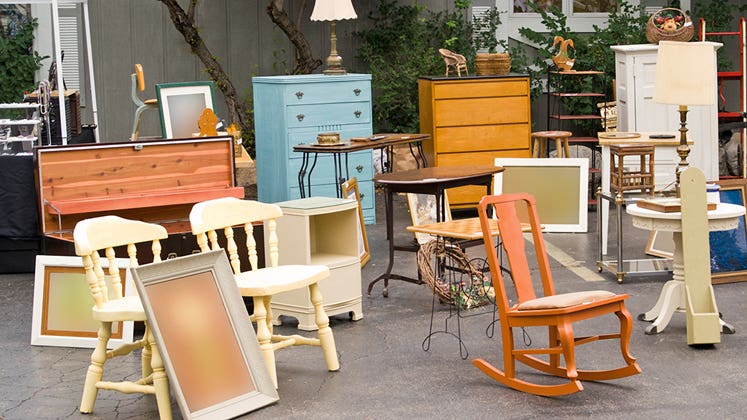 Losing a parent is hard enough without having to make thousands of decisions about which of their possessions to keep and how to discard what’s left.

Dianne Averill of Hopewell Junction, New York, had to clean out a four-bedroom house packed with her father’s things, plus a garage full of inherited items from his own parents. The sheer volume of collections, hobby equipment, tools and household goods was overwhelming.

“My father was an eBay addict,” says Averill, 58, whose company Averill & Associates develops websites. “A day without the UPS man was like a day without sunshine.”

Many methods of liquidation

Some people sort through all the stuff and handle the sales themselves, a process made easier by the Internet. More valuable items can be offered on eBay and bulkier possessions, such as furniture, are naturals for Craigslist. In the right season, yard sales can help dispose of what’s left over.

But Averill, like a growing number of inheritors, opted to hire an estate liquidation company to stage a sale. The liquidation business “is exploding” as the greatest generation dies off and baby boomers downsize, says Julie Hall, head of the American Society of Estate Liquidators and author of several books about clearing estates.

Hall estimates about 14,000 companies currently offer estate liquidation services, but the industry is unregulated and many have little training or experience. She recommends interviewing at least three firms and offered these suggestions for finding a credible, qualified company.

Research, research, research. Check the Better Business Bureau for complaints, and consult review sites such as Yelp and Angie’s List. Ask what credentials the liquidator has and check those out with the organization that issues them. If the liquidator is a qualified appraiser, as Hall is, they should be a member of one of the major appraisal societies, such as the American Society of Appraisers, the Appraisers Association of America, and the International Society of Appraisers.

If they’re not qualified appraisers, they should have some on speed dial that you can check out. Also, ask for contact information for at least three previous clients and call those references to ask about their experiences with the company, Hall says.

Understand the process. The typical estate liquidator keeps 35 to 40 percent of the sale proceeds, but that percentage can vary depending on the services offered. Have each company walk you through how they plan to research, appraise and price your items, how many days the sale will last (typically one to three) and how much negotiating with buyers it will do (many won’t haggle at the beginning of the sale, but will toward the end).

Also discuss what will happen after the sale. Some liquidators, including Hall, will dispose of what’s left and leave the house “broom clean” as part of their services. Others will do so for an additional fee. Still, others leave the final clear-out up to you.

Adjust your expectations. All those people dying and downsizing have combined with a soft economy to create a buyer’s market, Hall says. Families are often shocked to find the antiques they thought were valuable aren’t, or the collectibles that were worth thousands a few years ago are worth a fraction of that now. Still, there may still be unexpected finds, such as one case where a painting the family thought was ugly turned out to be worth $100,000, Hall says.

Clear out. Hall strongly recommends her clients not attend the sale. Buyers can be rude, the process can be emotional and it’s too easy to say the wrong things that can spook buyers, she says. “Someone will be looking at a chair and the client will say, ‘Henry loved that chair. In fact, Henry died in that chair!'” Hall says. “(The potential buyer) will say, ‘OK, goodbye!'”

Averill won’t disclose the amount her father’s estate sale raised but says it was “a lot — we were surprised at how much.” Averill and her two sisters were still left with a ton of possessions, though. After donating what they could, the three women rented “a monster dumpster, big enough to have a party in,” and hired movers to discard what was left.

Like many who have been through this process, Averill’s attitudes about her own stuff have changed. “I walk around and ask, ‘Would I move with it? No. It’s out,'” Averill says. “I don’t want to leave that decision to somebody else. I do know what a burden it is.”

More On Caring For The Elderly: