Elizabeth Miranda and her husband lost their business during the financial crisis, raiding their 401(k) accounts to try and save their house. They ended up losing their home, too, and depleted their retirement savings.

Sinking to financial rock bottom taught the couple a painful but valuable lesson: save more and live simply. It’s a lesson others, especially millennials, are heeding as more Americans say they’re saving more retirement in 2018 than last year, according to a new Bankrate survey.

The couple isn’t alone in their aspiration to retire comfortably: 28 percent of Americans are saving more for retirement this year compared with last year, Bankrate’s survey finds. And while more American workers are boosting their retirement savings, others are struggling to keep up because of lagging incomes. 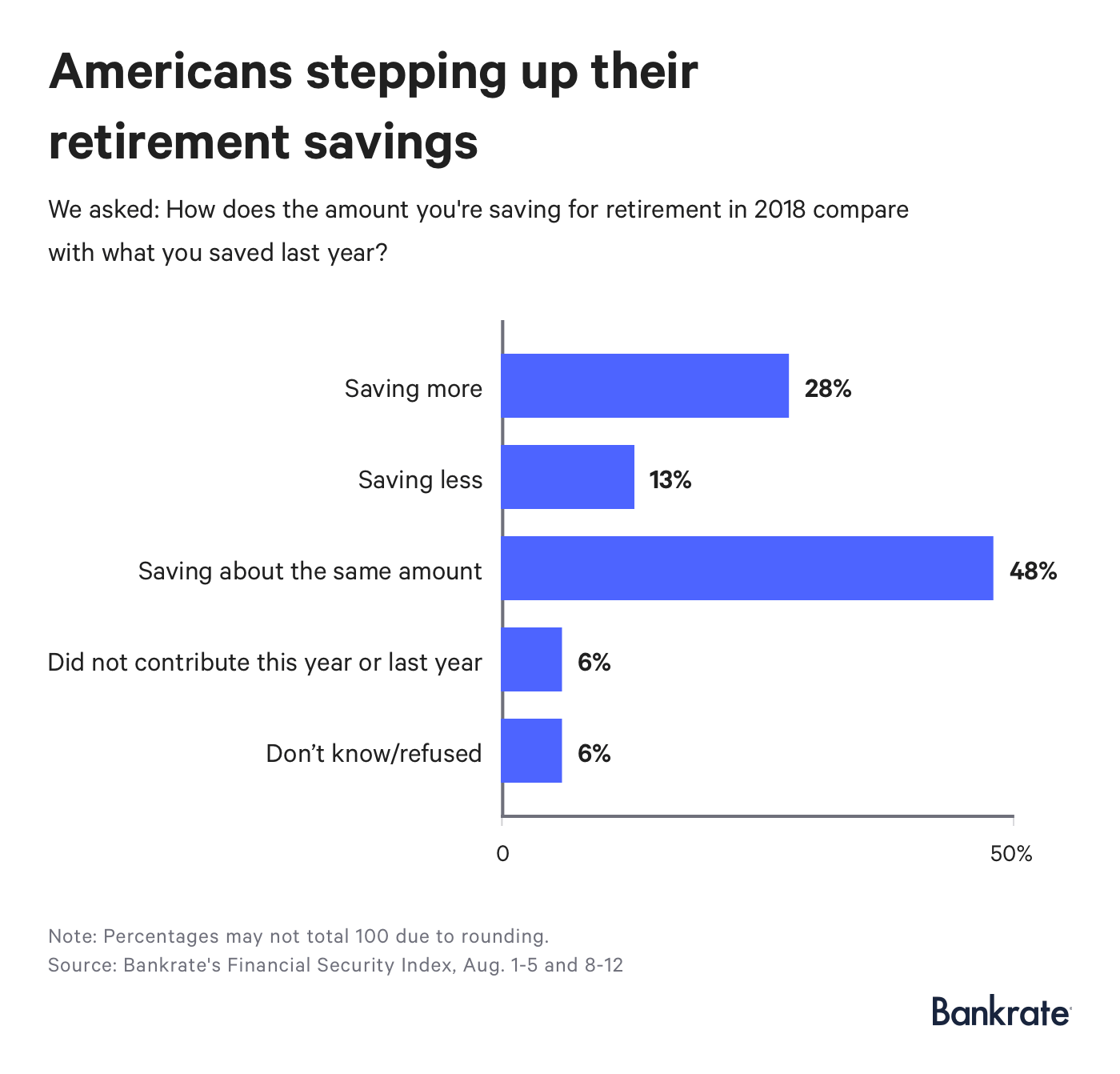 Miranda, a title closing agent who lives in Pembroke Pines, Florida, says she increased her retirement contributions from $40 to $65 per week. She also puts her monthly bonus checks into her 401(k) account, adding $15,000 to her retirement savings in the past year.

“We lived high,” Elizabeth Miranda, 36, recalls. “Once we were able to scale back and save, that was a life lesson. I will never go back there again. Today, we have a smaller townhouse for us and our 12-year-old son, and we keep things as small as possible so we can save more for retirement and vacations. Those are our main goals.”

Twenty-eight percent of employed Americans are saving more for retirement this year than they did last year — the highest level seen since Bankrate began polling in 2011. This is the fourth consecutive year that more Americans have boosted retirement savings, up from 23 percent in 2017; 21 percent in 2016; 19 percent in 2015; and 18 percent in 2013. (The question wasn’t surveyed in 2014.)

Bankrate also found that about 48 percent of working Americans are saving about the same amount for retirement this year as they did last year while 13 percent are saving less today than last year.

With soaring costs to buy and rent homes across the country, as well as higher prices for consumer goods, saving for retirement is a struggle for many Americans. And that’s problematic.

Twenty-six percent of workers cited a drop or no change in income as the main reason they haven’t saved more for retirement in the past year. That’s consistent with federal data that show real wages have barely budged in decades. Based on today’s average hourly wages, Americans’ purchasing power is the same today that it was in 1978, after adjusting for inflation, according to analysis by the Pew Research Center. 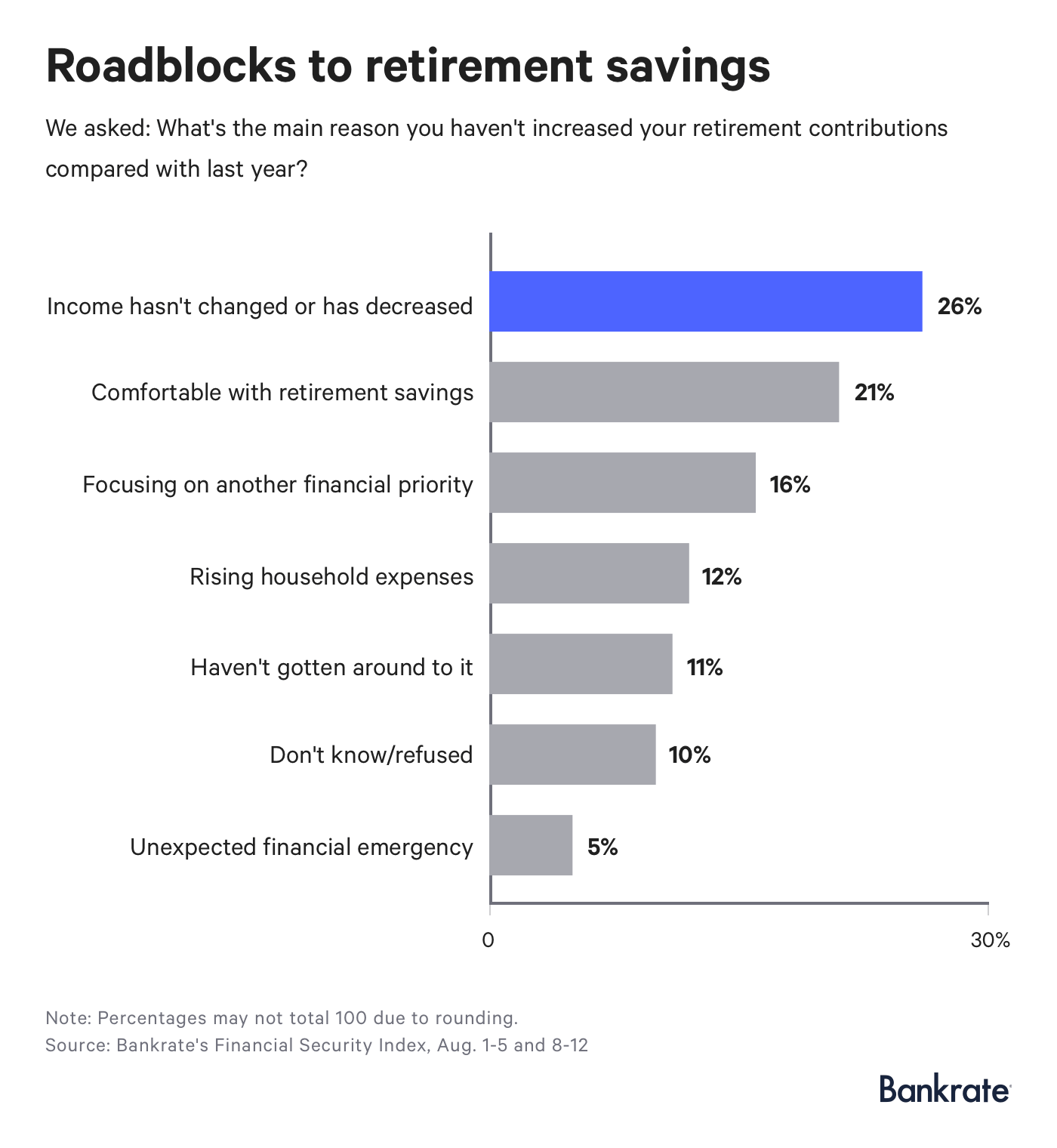 “Stagnant income and rising household expenses mean there is little financial wiggle room for many Americans,” says Greg McBride, CFA, chief financial analyst with Bankrate.com. “To save, or save more, requires paying yourself first through payroll deductions or automatic bank transfer.”

Some 16 percent of respondents said they’re focusing on another financial priority while 12 percent cited rising household expenses as to why they haven’t saved more for retirement in the past year. But not all workers are struggling to save. Some 21 percent of Americans said that they’re comfortable with their retirement savings or contributions.

If you’ve perused the headlines in the past year, you’ll find no shortage of studies that paint millennials as being careless with their finances. Bankrate’s survey, however, found that millennials are more likely to prioritize saving for retirement than any other generation.

Of all survey respondents, 39 percent of older millennials (ages 28 to 37) said they’re saving more for retirement today than last year, compared with 27 percent of younger millennials. Meanwhile, 26 percent of Gen Xers are saving more today, but baby boomers and members of the silent generation are more inclined to save the same amount.

Among those not increasing retirement savings, baby boomers were most likely to cite stagnant or falling income. Silent generation and older boomers (ages 64 to 72) were most likely to be comfortable with their savings or contributions. Younger millennials were more focused on another financial priority while older millennials said that rising household expenses were holding them back.

Regardless of your age, get into the habit of saving as much as possible, as early as possible, Losey advises.

“Expenses go up as you age, get married, have kids and buy a home,” Losey says. “If you save for retirement more aggressively in your 20s and 30s [when you don’t have those obligations], you’ll maximize savings and earn interest on top of interest. The snowball and compounding effect ensures your money is working for you.”

How much you should save for retirement?

Saving for retirement may not feel like a top priority if you’re already struggling with everyday expenses. But the sooner you start, the better off you’ll be. As you get older, health issues could limit your ability to work, leaving a major gap in your retirement savings. And Social Security income may not be enough to make up the shortfall.

If your employer offers a 401(k) retirement savings plan, enroll now and take advantage of the full company matching amount. That’s free money, and you don’t want to leave it on the table.

The IRS limits annual retirement contributions to $18,500 for most employer-provided retirement plans. Workers who are 50 or older can make a catch-up contribution of $6,000 per year, for a total contribution limit of $24,500 annually. The younger you are, the more aggressive you should be with your investments, experts say.

“If you’re not saving at least 10 percent of your income for retirement, raise your contributions to that level without delay,” McBride says. “Once you’re at 10 percent, aim to increase that to 15 percent, which is the target most working Americans should aim for.”

How to reach your retirement savings goals

Financial planners estimate you need about 6 to 11 times your final paycheck to retire securely. Many Americans struggle to amass that kind of nest egg, but it’s critical that they prioritize saving for retirement, says Bill Losey, CFP, owner of Bill Losey Retirement Solutions in Greenwich, New York.

The first step to paying yourself for retirement: setting up a budget and tracking expenses, Losey says.

“When you track how much you spend over 60 days, you’ll uncover anywhere from $200 to $500 per month that you’re wasting on things that provide no meaning or happiness,” Losey says, adding that’s newfound money that could be boosting your retirement savings.

When you get a raise or bonus, Losey recommends following the “1 percent rule.”

“If you get a 5 percent raise, always save 1 percent directly into your 401(k) and you can spend the rest of it so you can increase quality of life,” Losey says. “You’ll increase your savings and lower your taxable income. People look at finances as being black and white and wonder ‘Should I do this or that?’ But there’s so much grey in the middle.”

This study was conducted for Bankrate via telephone by SSRS on its Omnibus survey platform. Interviews were conducted from Aug. 1-5 and 8-12, 2018 among a sample of 2,011 respondents. The margin of error for total respondents is +/-2.69% at the 95% confidence level.