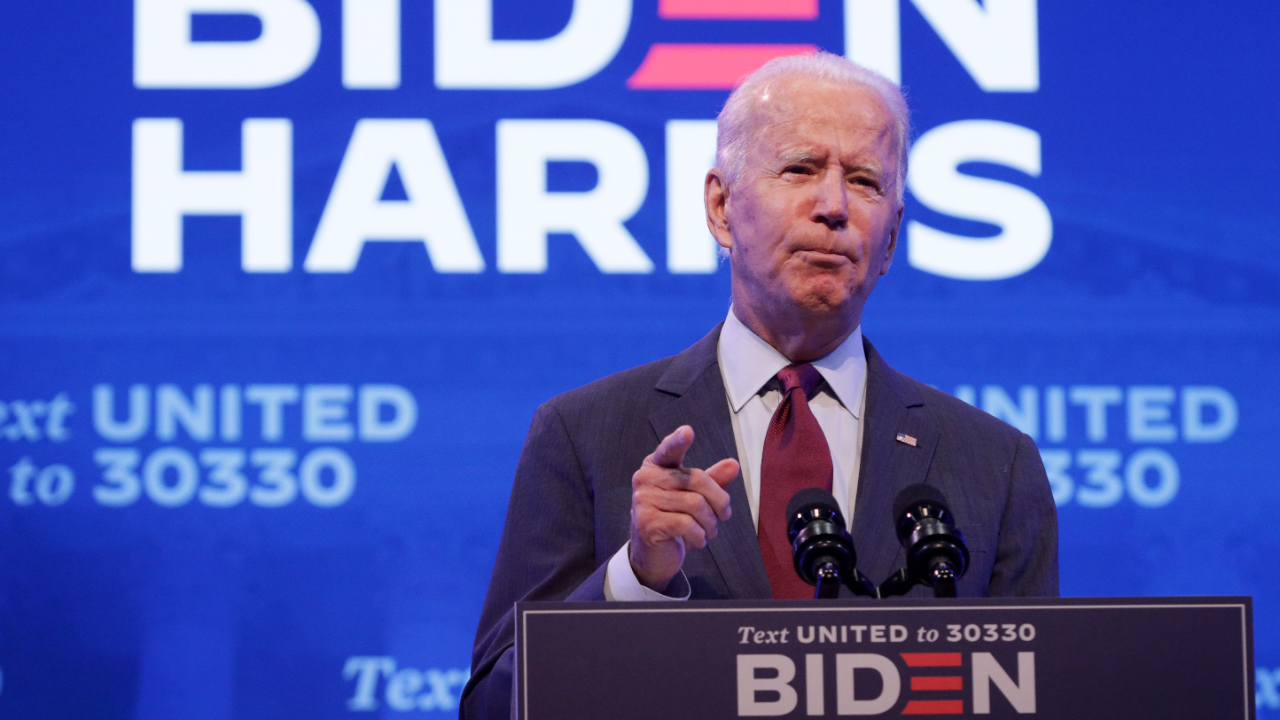 Add Social Security to the growing list of challenges that former Vice President Joe Biden will confront if he’s elected in November.

The entitlement program has always been up against long-standing problems. The Social Security Administration (SSA) is projecting that retirees will receive 100 percent of their promised benefits for only 15 more years, after which only 79 percent of those payouts would be recovered. Meanwhile, about 65 million Americans in 2020 will receive payments.

The U.S. population is aging, adding more pressure to the program at a time when older workers on the brink of retirement might decide to drop out of the labor force early, facing dwindling job prospects. Massive job losses related to the pandemic have also sapped Social Security’s main funding source: payroll taxes.

“Biden’s proposals aren’t designed at this point to solve the whole problem, but they move in the direction of better funding and would postpone the date that the trust fund runs out,” says Alicia Munnell, a professor at Boston College who directs the Center for Retirement Research. “The pandemic is moving forward the date of exhaustion of the trust fund, which means it’s going to be an action-forcing event.”

Here’s what you need to know from the Democratic nominee Biden’s plans for the program.

What could change with Social Security if Biden is elected?

Those earning more than $400,000 a year might want to tune in. Under the Biden plan, you’d have to pay a portion of the taxes that go toward funding Social Security.

Biden’s main approach to boosting revenue would be expanding the 12.4 percent Old-Age, Survivors and Disability Insurance tax (OASDI) to cover earners who make more than $400,000 a year. That’s more simply known as a payroll tax, with employees paying 6.2 percent and employers fronting the other half.

The wage base tends to moderately increase every year and is currently capped at $137,700, though analysts are unsure of how much that rate might go up for 2021 due to the pandemic.

Biden’s tax policy essentially means there’s going to be a “donut hole” of workers who aren’t charged this new rate (individuals who earn an upwards of $137,700 but less than $400,000), though theoretically, that gap could close over a longer period of time.

“Think of it simply as phasing in getting rid of the maximum,” says Nancy Altman, president of Social Security Works who was appointed to serve a six-year term on the Social Security Advisory Board by House Speaker Nancy Pelosi. “It’s a long phase-in, and it will probably take about 30 years, but it’s not forever.” She says those increases are indexed to coincide with rising wages, though the wage base cap might not lift off much next year given the pandemic.

The Social Security Trustees project estimates that unfunded obligations over the next 75 years will swell to $16.8 trillion, up from the $13.9 trillion estimate a year ago. Under the Biden plan, these new tax proposals could reduce that imbalance by about 40 percent, according to estimates from the University of Pennsylvania’s Wharton School of Business.

That’s not to say it will be free from challenges. Wharton’s budget model of the program also estimates that Biden’s tax plan could weigh on the economy moderately. That could come at a particularly challenging time, given the economic rebound from the pandemic that’s likely to linger for years. By 2030, the economy could shrink by 0.6 percent due to a reduction in capital formation, Wharton estimates.

Fewer payrolls may also mean reduced payroll tax revenue altogether, even if there’s a tax boost. President Donald Trump has argued for the flipside — reducing payroll taxes if he’s elected — with the idea that it might spur more job creation and boost revenues on its own. Experts, however, are still cautious about the point of view that tax cuts lead to more positive economic outcomes, given that some companies after the Tax Cuts and Jobs Act of 2017 turned to stock buybacks, rather than wage increases or jobs-creating investments.

If you worked for 30 years, Biden would reportedly offer you a higher benefit that’s 125 percent of the federal poverty level. If this had applied to 2019, that means the minimum monthly benefit would be $1,301, up from about $886, Wharton’s estimates also found. That proposal would also increase benefits between 5 and 50 percent for low earners who’ve worked anywhere between 10 and 30 years.

“The concept is that no one who’s worked 30 years should retire into poverty because of the way Social Security is set up,” Altman says.

3. Americans who’ve been receiving payments for at least 20 years would see a higher benefit

If you’ve been receiving benefits for at least 20 years, you’d also be eligible for a 5 percent uniform increase in your primary insurance amount (PIA). That increase would be phased in from retirees’ 16th through 20th years of drawing benefits at a rate of 1 percent. But it’s going to differ among income groups. The full 5 percent PIA amount comes with an assumption that workers earned an average wage equal to the SSA’s wage index.

It’s meant to help guard against the rising cost of aging, with extra transportation and health care costs often sending older U.S. adults into poverty. Some experts are calling it the “birthday bump,” according to Altman.

“Making sure that we keep that floor of income up for many Americans is a really important part of the system,” says Jamie Hopkins, managing director at Carson Group who specializes in retirement income planning. “The true buying power of Social Security has declined a little bit over time. We really aren’t providing as much of a benefit as we might’ve in the past.”

Biden wants to change the way widows and widowers collect their benefits, increasing what they collect from a deceased worker’s check by about 20 percent per month.

About four million adults are receiving monthly Social Security benefits based on their deceased spouse’s earnings, according to the SSA. The system is currently only set up to provide widowed spouses with 100 percent of their deceased partner’s benefits if they’re both at full retirement age. In some cases, widows and widowers can see a 50 percent cut.

5. Cost-of-living adjustments: Basing annual increases off a price index for the elderly

Biden also wants to adjust the cost-of-living index that the SSA uses to determine its annual increases. Under the nominee’s plan, the Consumer Price Index for the elderly (CPI-E) would replace the CPI index for urban wage earners and clerical workers (CPI-W). The theory goes that this index takes into account the typical basket of goods that matters to older Americans.

Though this index has risen in line with the broader CPI-W, it does tend to rise at a faster clip driven by rising health care costs, though some talk about implementation challenges of adjusting the entire system to fit a new price index.

“These changes in the price index, that might increase benefits slightly,” Munnell says.

What might matter most to Americans is what Biden isn’t doing: Proposing to fix Social Security’s problems by means-testing, raising the retirement age or privatizing the program. It’s emblematic of a growing belief among lawmakers that those methods might create more problems than they’d solve, Hopkins says, who adds that it’s not something lawmakers have been advocating for in the past 20 years.

Biden does have a complicated record when it comes to Social Security. While a lawmaker in the early 1980s, he advocated for freezing government spending on a variety of initiatives that included entitlement programs. Experts, however, caution against Americans fearing Biden could adopt this stance, saying they don’t reflect his views now nor the broader Democratic party.

“It’s fair to say he might have a different view in 2020 than in the early ‘80s or ‘70s,” Hopkins says. “We far better realize the importance of Social Security as a system now.”

Though contingent upon getting a Social Security bill through might depend on who occupies Congress. Republicans generally favor reducing benefits rather than increasing taxes to fix the system, though they’ve drifted farther toward the center in recent years, Hopkins says. Rather, lawmakers across the board prefer modernizing, updating and securing the program’s future. He does, however, question whether a “good” bill could get through Congress without some kind of cutback to benefits.

New estimates suggest that the trust fund could be depleted by 2028, which would be sooner than the 2035 deadline. If that happens, Munnell says, individuals could face an across-the-board benefit cut.

Biden’s policy proposal can more so be thought of as a bandaid to the issue, experts say. It potentially prolongs the depletion, but it doesn’t entirely get rid of the problem looming around the corner.

“It’s completely reasonable and makes a number of important improvements, but I would say it’s the next step. We should keep building on this structure,” Altman says. “If there’s someone who is sick, you don’t want to just treat the symptoms, you want to eradicate the cause.”