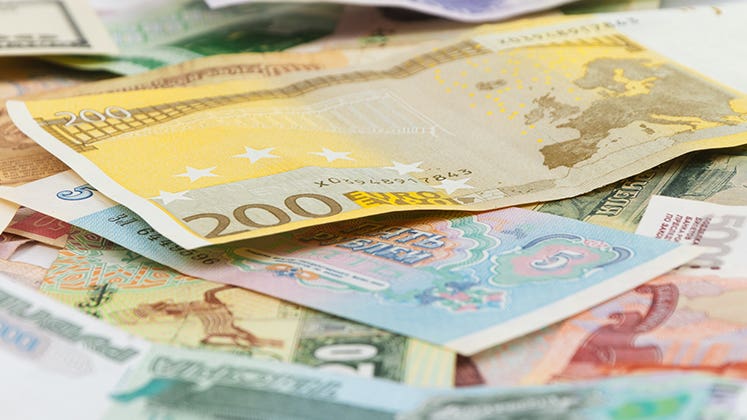 Investing in fast-growing countries may seem like a slam dunk. But there’s another unforeseen risk that can roil returns: foreign currency risk.

These gyrations can quickly wipe out any portfolio gains.

How does this happen? U.S. investors plunking down money overseas make bets on both a stock or bond and a currency. A falling dollar means gains for investors. But when the dollar rises against a currency, returns can rapidly fade.

Here’s how it works. Say you hold European stocks priced in euros. You are making two bets — on the rise or fall in the price of the stock and the value of the euro. There is a boost in returns when the dollar falls against a foreign currency. But in another scenario, if a European stock rises, say, 10 percent and the euro dips 10 percent against the dollar, your gains are wiped out.

Wild currency fluctuations can set your portfolio back considerably.

“Investors aren’t as concerned about currency risk as they should be,” says Andrew Carrillo, president and CEO of Barnett Capital Advisors in Miami. “They need to understand risk and how exposed they are.”

There is support for Carrillo’s statement. Blackman Wealth Services, which made a calculation of return and the impact of currency on it for an Oct. 27, 2013, investing blog, showed that wide currency fluctuations can boost or, conversely, eat up portfolio returns over long time spans.

All this is important because U.S. investments overseas are destined to become even more alluring. Emerging markets now make up 40 percent of the world’s gross domestic product versus 18 percent two decades ago, according to Bloomberg News. Long-term forecasts predict that this slice will increase to 60 percent by 2030. So, foreign stocks are sure to grab even more investor attention.

Follow these four rules so you don’t get sideswiped by foreign currency risk.

High debt usually precedes high inflation, Carrillo says. And when inflation kicks in, currencies usually fall as confidence in them declines. However, countries with low debt to GDP have rising currencies, which can be profitable for U.S. investors.

“Make sure you pick an economically sound country and stick with it,” Carrillo says. “If there’s a big devaluation in the dollar, foreign stocks will also do well.”

2. Know that foreign bonds can be especially hard hit.

Bonds are especially vulnerable to currency fluctuations, since they have lower gains to offset currency losses.

“When investing in a foreign bond index, currency fluctuations can be plus or minus 10 percent,” says Ed Boyle, senior portfolio manager for American Century Investments in New York City. “These changes are double what a bond may return.” To be sure, however, there’s less effect on equities since they can have higher returns.

Scott Stratton, president of Good Life Wealth Management LLC, agrees. Currency fluctuations have a much greater impact on foreign bonds than changes in the bonds’ prices, he says. Historically, most foreign-country bonds were issued in dollar valuations, Stratton says. Today, many are issued in local currencies. Still, investors can find bonds issued in dollars, and that can be a more stable investment.

The best way to protect your foreign returns is to invest in mutual funds or exchange-traded funds that are hedged, says Boyle. These funds usually use sophisticated investments like futures and options to hedge the currency risk of a bond or equity, and reduce losses.

Many new ETFs that hedge currencies have been introduced within the past year, says Neena Mishra, director of ETF research at Zacks Investment Research. Now, currency-hedged ETFs are available in almost any region of the world, including emerging markets, Germany and Japan. For example, the WisdomTree Japan Hedged Equity Fund hedges currency fluctuations between the dollar and the Japanese yen.

Currency-hedged ETFs can cut into returns while also lowering your losses, Mishra says. “They are slightly more expensive than non-hedged ETFs,” she says. “On the upside, currency-hedged ETFs are less volatile than ones that do not hedge. So, it’s one of the most important ways to protect yourself from losses.”

Mishra says another option is to invest in regions where the currency is pegged to the dollar. For example, several Middle Eastern countries, including Lebanon and Saudi Arabia, peg their pounds and riyals to the dollar. Conversely, several African countries, such as Senegal and Cameroon, peg their currencies to euros. “That’s another way to diversify holdings,” she says.

Generally, Boyle says currency volatility is at an all-time low for developed countries, despite rising geopolitical risks, and the dollar is still the world’s safe-haven currency. “So if there’s trouble overseas, the dollar will appreciate,” he says.

Lastly, don’t put all your assets in foreign markets. The limit should be 25 percent of portfolio assets, Carillo says. “And understand your currency risk,” he says.