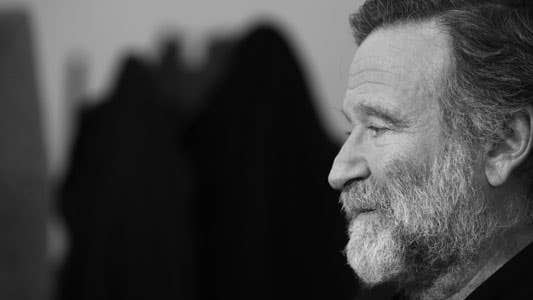 Sixty-three-year-old Robin Williams was a man who seemed to have it all — talent, opportunity, friends, family, admirers and the financial wherewithal to get the best treatment for any kind of ailment — no matter how difficult to treat.

But it wasn’t enough to stop him from taking his own life on Monday.

Above, Robin Williams at a meet-and-greet in New York City. © Walter McBride/Corbis

Mental illness and resulting suicide is a particularly vicious killer of people 65 and older. Using statistics from 2010, the Centers for Disease Control reported that 14.9 out of every 100,000 people in that age range killed themselves. Suicide deaths grow more numerous among men — especially white men — as they age, with 29 per 100,000 men 65 and older taking their lives and 47 per 100,000 of white men over age 85 taking that step.

If a man with the resources that Williams had couldn’t get the help he needed to save himself, what about the rest of us with less money and fewer places to turn? The Altarum Institute, a health policy institute based in Ann Arbor, Michigan, and Washington DC, provided some health care professionals to address this question.

“The amount of money a person has doesn’t save anybody,” says Darlene Powell Garlington,  a licensed clinical psychologist in private practice for more than 20 years. “We see a lot of people who instead of taking a prescription drug, self medicate with drugs and alcohol. When you are depressed, you try to find a way to get that high back — it’s a vicious cycle. Robin Williams was open about his addictions. He couldn’t get himself stable enough.”

Garlington says that another issue that many older people struggle with is their need to rely on others. “One of the key factors is not wanting to be a burden. People kill themselves because they think they are relieving their loved ones of the burden they represent.”

A third factor she points to is the connection between heart disease and depression, described here by the National Institute of Mental Health. Williams underwent major heart surgery in 2009, she pointed out. It wouldn’t be unusual for that to have exacerbated his other mental health problems.

New Medicare and Affordable Care Act, or ACA, guidelines both encourage primary care doctors to include a depression screening in the annual health care exam available at no additional charge to anyone who is signed up for coverage, says Judith Peres, a senior policy analyst with the Center for Elder Care and Advanced Illness and an expert on Medicare and Medicaid policies.

The Veteran’s Administration, or VA, is another source of mental health care for anyone who has previously served in the armed forces and who is honorably discharged — even if it was decades ago. Since 2010, the VA has redefined post traumatic stress disorder and as a result more boomers who came home from Vietnam with mental disorders have been able to claim veteran’s disability.

Vietnam-era vets who believe they still have lingering mental health issues should go to the VA, says Tracey Taylor, a psychiatry advanced practice nurse and a liaison for U.S. Department of Veterans Affairs and the Department of Defense joint educational endeavors. “The VA is working very hard to to let people know that they are welcome,” she says.

There is no cost for an evaluation and there are no income limits. If the VA finds evidence of service-related mental illness, the veteran may qualify for veteran’s disability payments no matter what his or her income. Local military service organizations such as the Vietnam Veterans of America provide help for veterans in need of assistance navigating the VA bureaucracy.

Worried about a loved one who seems to be struggling with mental issues? One thing family members can do is encourage them not to be isolated since feeling alone can aggravate depression. “Urge them to take advantage of senior centers and join support groups — anything that will make them less isolated,” Peres says.