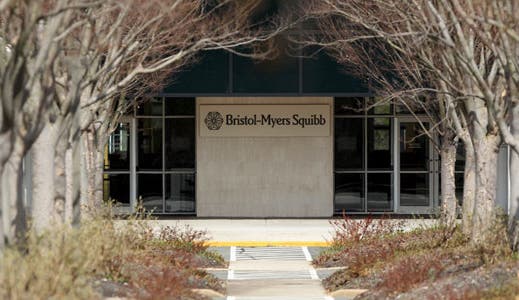 The move to turn over the liabilities and management of old-fashioned defined benefit pension plans to insurance companies started about two years ago, when Detroit automotive giant GM and Verizon Communications both ceded their billions in pension obligations to Prudential Financial.

The trend slowed in 2013, but recently both Motorola Solutions and Bristol-Myers Squibb transferred several more billions in pension obligations to Prudential. Other big players in this business are MetLife and American International Group.

Bristol-Myers Squibb is transferring $1.4 billion in pension obligations for about 8,000 retirees to Prudential. © SAED HINDASH/Reuters/Corbis

When these insurers take over, they turn the pension plans into annuities and promise to pay obligations to retirees at the contracted level for as long as the retirees and, in many cases, their spouses, live. The insurance companies find this business profitable because the companies whose obligations they assume not only turn over the cash in their pension plans but also pay an upfront charge to rid themselves of pension obligations. Insurers make a bet that they can manage this pool of money better, meet all the obligations and still have profits left over.

If your current or former employer takes this route, should you be nervous? “I think people should take comfort in the knowledge that insurance companies have been managing these kinds of pension liabilities for the last 100 years. We have managed the Cleveland Public Library’s first pension plan since 1928, and we still have beneficiaries to whom we are paying benefits,” says Scott Kaplan, a senior vice president and head of Global Product and Market Solutions for Prudential’s Pension & Structured Solutions business.

He makes the following five points to corporate executives about the wisdom of these transactions. As a pensioner or a worker with a pension acquisition in your future, you should have some of the same questions that the boss does, and may find these answers from Prudential reassuring.

Why can an insurance company manage pension obligations better than the company can? “As defined benefit plans are discontinued and people retire and age, the obligations inside these plans become fixed and a different investment strategy is required — not just investing for return, but investing very specifically against liabilities. That’s what insurance companies know how to do,”  Kaplan says.

Would the company (and retirees) be better off if it waited until interest rates are higher? “A company with a lot of pension assets invested in fixed income won’t benefit when interest rates go up. The company that waits might be burned pretty badly,” Kaplan says.

What happens if the insurance company fails? State regulators will step in and another insurer will assume the obligations. Any shortfall will be made up from state guarantee funds — instead of the federal Pension Benefit Guaranty Corporation, which is taken off the hook in these transactions.

Will stockholders be hurt by this transaction? “We think transferring risk from a corporate sponsor that isn’t well suited to managing a pension plan reduces risk to shareholders by creating certainty for them and allowing the company to focus on its core business,” Kaplan says.

Correction: In the original version of this blog post, it was incorrectly stated that Ford was among the companies that ceded their pension obligations to Prudential Financial. In fact, Prudential didn’t handle the Ford pension buyouts.