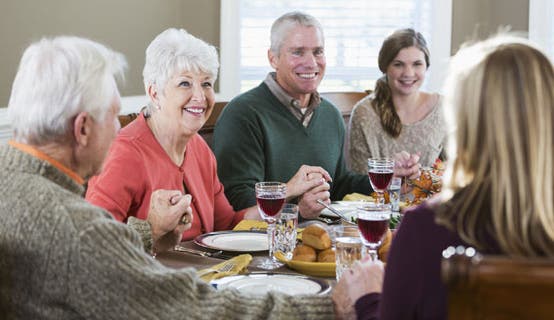 We always thought my late uncle was eccentric, but at Thanksgiving many years ago, he started pouring red wine into glasses nobody else could see. We called it senility. Now the label is dementia, often Alzheimer’s disease, a frighteningly common problem.

This awful disease affects 5.1 million people this year, and the Alzheimer’s Association expects that number to rise to 13.8 million in 2050 — unless there is some kind of breakthrough.

Have the talk soon

November is Alzheimer’s Awareness Month. Adam Beck, assistant professor of health insurance and the director of the Center for Special Needs Planning at The American College, says that although combining a conversation about Alzheimer’s with a family visit over the holiday may not seem like a fun idea, but the timing could be right.

Alzheimer’s is a disease that affects whole families because of the need for caregiving, the potentially significant expenses related to that, and the risk that someone will take financial advantage of an Alzheimer’s sufferer. The likelihood of Alzheimer’s affecting a loved one increases significantly the older they get. The time to talk, Beck says, is while everyone can share in a tough but rational conversation and agree on putting protections in place. “By the time symptoms manifest themselves, it is often too late to have important conversations,” he says.

Plan for yourself, as well

Good first steps for everyone, Beck believes, is involving both a financial adviser or accountant and a knowledgeable attorney, preferably one with elder law knowledge. Together, they should examine your will and financial affairs and offer some suggestions for protecting you in case you need dementia care. “You can have a wonderfully planned retirement, and then you or a spouse are affected by dementia and suddenly every remaining dollar is wrapped up in assisted living or nursing home costs,” he says.

Beck thinks it is particularly important to talk about this issue in advance in the case of a second or third marriage, when not-so-smoothly blended families may not see caregiving or estate planning in the same way.

Now, before disease strikes, is also the time to consider Medicaid planning. Smart Medicaid management can prevent families from having to spend all the assets in order to keep a family member in a nursing home. Medicaid look-back rules related to the transfer of financial assets can be especially complex, and understanding them in time to react can be particularly important for moderate-income families, Beck says.

It can also be a good idea to put an alert system in place, so someone else knows if you are allowing your long-term care policy to lapse. People who let their long-term care policies lapse are statistically more likely to need them later, according to a new study by the Center for Retirement Research at Boston College. And one of the biggest reasons for lapsing is cognitive decline, the study finds.

All of this may seem like a painful conversation to have over turkey, but Beck says do it now while you can. “People are living longer. And as we live longer, retirement income is stretched thin, and at the same time, you see Alzheimer’s increasing. I think families need to be prepared for that.”

Here are some steps to take if you think your parent has Alzheimer’s.