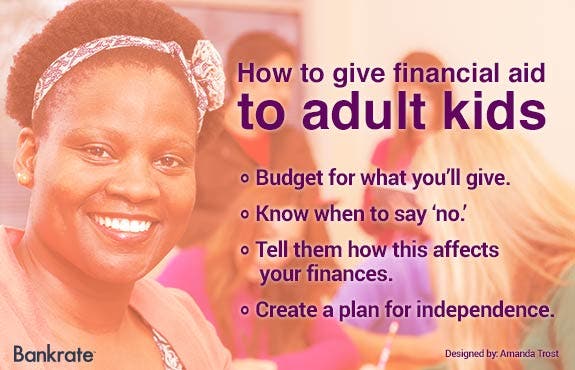 Do children impact your ability to retire? The answer may depend on how long you financially support them. According to new research from Hearts & Wallets, baby boomers with financially independent adult children are more than twice as likely to be retired as those who are still supporting their kids.

It’s a hard position to be in as a parent. Of course, you want to help your kids, but you also know that planning and saving for your own retirement is important. If you put it off, your kids may end up supporting you. Even if you intend to work longer to accumulate more, essentially delaying retirement, your health (or employer) could easily have other plans.

“They are putting off their own needs and goals to support children, and it’s time to have serious talks about how much of an impact this is going to have,” says Chris Brown, co-founder of Hearts & Wallets.

If this sounds familiar, here’s how to juggle the needs of your children with that of your own:

Be honest with yourself. “If you’re going to be putting yourself at financial risk, do it knowingly,” says Ted Beck, president of the National Endowment for Financial Education. That means factoring the financial support you’re offering to your children into your budget, just as you would any other expense. And it means prioritizing, so if everything doesn’t fit into that budget with room left over to save, you start making cuts rather than going into debt or sabotaging your retirement.

Consider the circumstances. There’s a difference between perpetually supporting your kids and helping them out of a jam. It’s reasonable that you’d consider the latter part of your role as a parent; the former can quickly become enabling. Footing the bill for vacations and cable bills is a risky proposition, says Beck. “That’s a hard one to swallow, especially if doing so is putting yourself at risk. At some point, you have to recognize that you’re subsidizing the lifestyle of an adult child, and that really should be cut off.”

Have an adult discussion. Your kids may not know that the support you’re giving to them is impacting your own finances — whether that means you’re going into debt, or that you may be forced to delay your retirement. Sharing that information may be the impetus they need to get off the dole. But be sure you frame it as a discussion, rather than a lecture, says Beck. “A conversation like this can quickly deteriorate into a fight and that’s not what you want.”

Create a plan for independence. If you decide that it’s time to cut, or at least reduce, financial ties, sit down together and develop a plan for how that is going to happen. Are you going to cut them off cold turkey? Offer to provide money for a few more months? What can your child do to shoulder more of the burden, whether that’s a second job or following a careful budget? Come to an agreement on what steps will be taken, and formalize it on paper if necessary. “It’s about setting realistic limits,” says Beck.