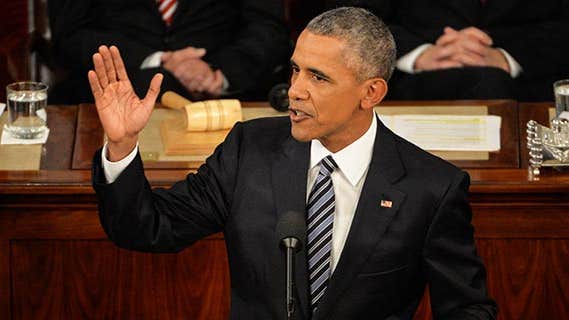 One of President Obama’s best lines in his State of the Union address needled his fellow public servants and politicians about retirement. He was talking about the need for more access to affordable higher education, then he segued into workplace security:

“Of course, a great education isn’t all we need in this new economy,” he said. “We also need benefits and protections that provide a basic measure of security. After all, it’s not much of a stretch to say that some of the only people in America who are going to work the same job, in the same place, with a health and retirement package, for 30 years, are sitting in this chamber.

“For everyone else — especially folks in their 40s and 50s — saving for retirement or bouncing back from job loss has gotten a lot tougher,” the president added.

One of the answers, he said, is portability of retirement savings. “Even if he’s going from job to job, he should still be able to save for retirement and take his savings with him. That’s the way we make the new economy work better for everyone,” Obama said.

And we should hold onto the foundations of retirement security, he advised. “Social Security and Medicare are more important than ever; we shouldn’t weaken them, we should strengthen them.”

That’s easy to say, but not so easy to do. The American Academy of Actuaries, a nonprofit organization of actuarial professionals in the pension and insurance industries, had hoped even before the president made his speech that he would emphasize the need to shore up the health and financial stability of Medicare.

“I think policymakers should be focusing on Medicare’s long-term sustainability challenges,” says American Academy of Actuaries Senior Health Fellow Cori Uccello. “Starting in the mid 2020s, the money coming into Medicare is less than money going out, and the trust fund that covers the difference will be spent down and depleted by 2030.”

At that point, the actuaries believe that annual payroll taxes will cover only 86% of the program’s costs. “Bringing the trust fund back into balance will require cuts in program spending, increased funding or some combination of the 2,” the organization emphasizes in policy statements.

No easy fix for Medicare

Uccello warns that a real crisis could develop if millions of Medicare recipients lose access to near fully funded health care. “There is nothing in current law to cover that difference. There is no automatic way of taking money from something else and devoting it to Medicare,” she says.

Compared to Social Security, the financial stability of Medicare hasn’t gotten much attention. “There were provisions in the Affordable Care Act that slowed Medicare spending and increased revenues,” says Uccello, “but those provisions weren’t enough to ensure long-term sustainability.”

If older Americans are to continue to be covered by Medicare, “We must make sure that the program continues to pay providers and keeps costs low, giving beneficiaries access to affordable care. Not easy,” Uccello says.

The Obama era is ending. As we go full tilt into the 2016 election season, we voters  must insist that the candidates for the presidency don’t ignore this issue. Medicare isn’t a sexy topic, and it’s easy to overlook. Don’t let it happen. Insist that Medicare sustainability — and other retirement security topics — be part of the election conversation.

Some candidates have been vague when they talk about Social Security’s future.