If you’re like most people, you have less than $75,000 saved for retirement. Yet, you keep hearing that you need upward of $1 million to make it through your retirement years. Just where is that million bucks going to come from?

The dire statistics from PwC, which provides consulting services to corporations and studies workforce populations are:

Most financial experts recommend saving at amounts up to 15% or 20% of your salary. A simple idea — living in retirement on 80% of your pre-retirement salary — can translate into a simple strategy, says Kevin Watt, vice president of National Accounts for Security Benefit: “Live on 80% of what you make, starting now, and save 20%.”

RATE SEARCH: CDs are a very safe place for retirement savings. Find the best rates on CDs at Bankrate.com.

Here are the stories of 3 super-savers — people who have saved more than double the national average of account balances for people of their age. 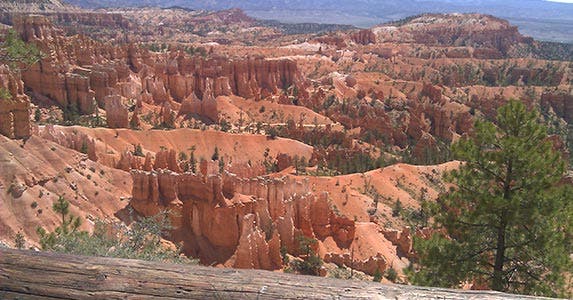 Tonya Banks and her family took a road trip in 2014 to Zion National Park in Utah (pictured), Mount Rushmore and several other places.

Tonya Banks says she is definitely not a high-income earner. But the accountant who lives in Modesto, California, is a consistent saver who makes the most out of her $55,000 salary, as well as $2,000 from a part-time job.

“It was not much when I started (at 31), but I believe I will be able to maintain my current standard of living into my retirement years,” she says. To date, Banks has built up a sizable nest egg — well above the average of $68,683 for people age 45 to 49, according to the Employee Benefit Research Institute, which tracks IRA balances, as well as workplace retirement plans and trends. She saves in 3 accounts: a SIMPLE IRA, a Roth and a traditional IRA.

Travel was Banks’ main motivation. She began traveling in her 20s and knew she wanted to do that when she was older. “I realized to do that I would need some money,” she says. In 1998, she began dabbling in individual stocks, which turned out to be a mistake.

“I figured out pretty quickly I didn’t know what I was doing,” she admits. With rudimentary knowledge of different market segments and equities, she chose the 4 best-performing mutual funds, all in large-cap funds, not realizing they were all invested in the same stocks.

Banks gets most of her financial info from the Internet, including sites such as Bogleheads.com and Morningstar. For inspiration, she looks to other investors on sites such as savingsadvice.com, where people trade tips and share their personal financial stories in blogs.

Banks plans to retire within 10 years, swapping her house for a small condo and a trailer that will make it easy for her to travel to national and state parks.

ADVISER SEARCH: Are you behind on your retirement saving? Find a certified financial planner today.

Five years ago, Banks began keeping a budget, which she says made her more mindful about the trade-offs of her money. “You’re more aware that all of your money is like a pie,” she explains. “If you cut this slice a little wider, that’s fine — but you’ll have to have a thinner slice somewhere else.” Otherwise, people just buy everything they want and worry later about how they’ll pay for it.

Banks says the budget is not austere — her spending allowance is 7 1/2% of her salary, and she describes her lifestyle as comfortable, with a lot of international and domestic travel. “I’ve taken a lot of trips within the States,” she says. “I paid as I went. I could have been saving and investing that money, but I chose not to.”

Budgeting felt like a lot of guesswork in the beginning, she says. You might initially budget $300 a month for food, for example, and then find that amount unworkable. “You think you can’t do it,” she says, “but for me it was better to have (a budget).” After a little fine-tuning, Banks created a viable spending plan that reduced her anxiety about money. “If you’re a little under or over, you can adjust month to month.”

Banks admits that even as a child she found satisfaction in saving money instead of frittering it away. “By the time I was 9, I had $100 saved,” she says. She started savings accounts in mutual funds for her kids when they were small and taught them about the meaning of saving as they got older. “They both like to save,” she says, “and I hope they invest regularly when they are young adults.”

The power of automation 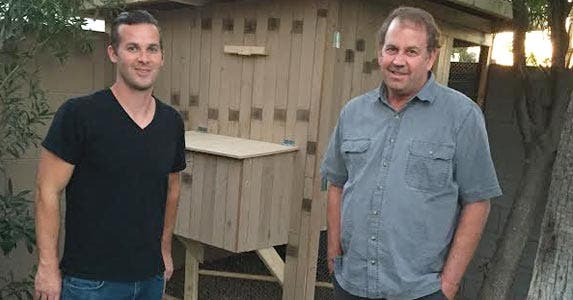 Brett Farmiloe (left) and his Uncle Mike, in front of the henhouse they built in Brett’s backyard.

Like most people in their 20s, Brett Farmiloe didn’t give a thought to saving for retirement. Instead, he traveled extensively — 46 states and 7 countries — before putting away that first dollar at age 28. Now married with 2 young kids, Farmiloe runs his own digital marketing agency, Markitors, in Scottsdale, Arizona.

Most people in their early 30s have saved an average of $33,784 in an IRA, according to the Employee Benefit Research Institute, but Farmiloe has more than doubled that amount.

After the birth of his first child and with new concerns about supporting himself in retirement, Farmiloe began reading Ramit Sethi’s “I Will Teach You How to Be Rich,” which included a simple, clear chart about the power of investing. Farmiloe caught the saving and investing bug and started to max out his retirement savings options: a self-employed 401(k) that he stocks with $18,000 a year, and an IRA into which he contributes the maximum $5,500.

Those contributions are meant to catch up for what he calls a decade of investment neglect. “The birth of 2 kids officially makes you a grown-up,” says Farmiloe, who also wants to leave money for his family. “That’s when you naturally get serious about savings.”

Employers count on automatic enrollment to encourage their workforce to save for retirement without agonizing over the decision. But even if you work for yourself, you can still use automation — one of Farmiloe’s tactics. “I automate just about everything,” he says. At the beginning of the year, he spends about 4 hours making a budget. Then he sets up automated deductions to both accounts.

Because he is self-employed, he re-evaluates income quarterly to see if he needs to scale back on savings or contribute more, based on his income and percentage targets.

Farmiloe has a 15-year fixed-rate mortgage and pays $1,200 a month for a lot of house (3 bedrooms, 2 baths and a pool) for the money, compared with those of his California friends. “My fixed-cost expenses are 45% of my income,” he says, instead of the 65% to 70% the fixed costs would be in San Francisco, for example.

Saying “no” to living in an expensive area (and visiting occasionally) gives Farmiloe an automatic extra 20% to save — not to mention the extra outdoor space that accommodates a chicken coop and backyard vegetable gardens.

Worry now and not later

Farmiloe says he probably worries more about retirement now that he is conscious about saving for the senior years. “I don’t have a specific age in mind for retirement,” he says. “I’m just doing what I can now to better prepare myself for when the time comes.”

And Farmiloe has no regrets about not saving in his young adulthood. “I’ve found that my answer to retirement planning is in balancing the fun experiences in your 20s with saving in your 30s,” he says. “The experiences not only calm the wanderlust for having fun and exploring the world, but they’ll calm the regrets later in retirement. And at the same time, focusing on savings now means that I’ll be able to retire without a worry later.” 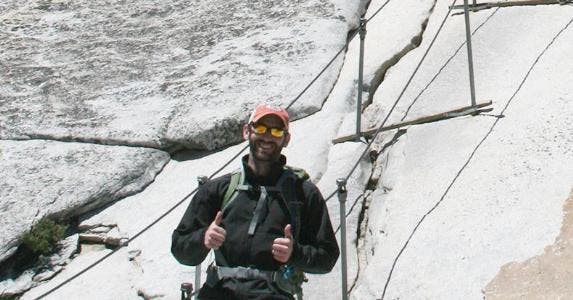 Kyle James climbing Half Dome in Yosemite National Park in California in June 2014.

Kyle James is set on financial independence. “Growing up, I would see my friends squander money on anything and everything,” he says. “Then, there a lot of times when they couldn’t do something or go somewhere because they did not have a dime to their name.”

Early on, James recognized that reining in spending would allow him to do what he wanted to do. As a high school freshman, he became serious about saving the $5.25 an hour he earned as a lifeguard at the community pool in the summer. “I socked away as much of that as I could,” he says.

Now, James sets aside more than a third of his income as an information technology desktop support staffer in Rockville, Maryland, which has allowed him to accumulate substantially more than the average of $20,456 that most his age have managed to save. The way he does it is by maxing out 2 retirement savings vehicles: a workplace 401(k), which gets an annual contribution of $18,000, and a Roth IRA, into which he stashes $5,500, the maximum allowed.

Fear of not having enough to retire is the force behind his highly disciplined approach to saving. “As soon as I can leave the workforce and not worry about money, I will.” says James, who hopes to retire by age 52. “Time is something money cannot buy.”

ADVISER SEARCH: Want to retire early? Search today for a financial adviser who can help you fulfill your dream.

James invests without specific role models and visits free online financial sites and financial forums. “No one really taught me about finances,” he says. “My parents didn’t know much about investing.”

He did hit a financial snag in 2007 when he tried penny stocks. “It didn’t take long for me to realize this wasn’t going to work out in my favor,” he says. In just 2 days he lost $700, which he eventually came to see as a relatively cheap lesson to learn. “I got off pretty easy,” he admits.

James’ household income, combined with that of his spouse, is $145,000, and the 2 have always been conscious spenders who track purchases. “We’ve never had a spending allowance,” he says.

People need to look at the big picture, James believes, and place seemingly insignificant things into a larger context. “If someone walks into a coffee shop and buys a $3 coffee, it doesn’t seem like a big deal,” he says, but that habit could add up quickly over a year. He dedicates a few hours each weekend to cooking for the entire week, which covers almost all lunches and dinners. James swears by the slow cooker and free online recipes.

Another metric he uses: the cost of an item translated into the work hours needed to buy it. “If you are looking at a $700 flat-screen TV, crunch the numbers and determine how many hours of work it takes,” he says. “Is it really worth it?”

James admits that his methods aren’t new. “It’s very simple, and it gets repeated over and over whenever an article is written about saving money,” he says. “But it works, and it’s effective. Try it for a few days in a row. Pack a lunch … make a cup of coffee at home … it’s not difficult.”