Are you saving too much for retirement? 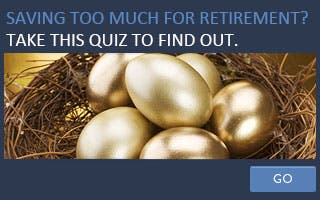 Do you constantly worry about saving enough so you won’t run out of money in your golden years? It’s possible that you might actually be saving too much for retirement.

That’s the assessment of David Blanchett, head of retirement research for Chicago-based Morningstar Investment Management, in a recent study he conducted.

“I think this is potentially good news for those who are behind schedule in that it suggests that retirement isn’t as expensive as other models show. This means you may be in better shape than you thought,” he says.

According to Blanchett, you might find that the amount you will need for retirement is as much as 20 percent lower than what you expected.

In the standard approach to retirement planning, the models assume a replacement rate of about 70 percent to 80 percent of the income you made prior to retirement. From there, planners assume that you will boost your withdrawal annually to take into account inflation, and that you will need this income for a period of 30 years.

However, these assumptions don’t actually hold true for everyone. Many households don’t actually boost their withdrawals to adjust for inflation every year, and the period of time for which you will need retirement income also varies, based on how long you’ll live — an unknowable variable, to be sure.

Blanchett finds that your actual income replacement rate could vary from lower than 54 percent to higher than 87 percent, making for a wide dispersion around the standard 70 percent assumption.

How can you tell if you’re saving too much for retirement? Consider some big-ticket items that may go away once you stop working.

For instance, those in a higher tax bracket prior to retirement may find they can safely assume a lower replacement rate since they will likely fall into a lower bracket and pay less tax on retirement income.

If you have paid off your mortgage prior to retirement, you will not have to plan for this expense, further lowering your replacement rate. And those who are done with paying for their children’s educations don’t have to worry about that expense either.

In some cases, you could also be cutting down on your food expenses in retirement, considering that you will have more time to cook and also shop for bargains.

More On Saving For Retirement:

“To me, the conclusion is that determining how much you need in retirement is a highly personal matter,” says David A. Littell, co-director of The American College’s New York Life Center for Retirement Income. “Maybe you use a replacement rate when you are young, but as you are approaching retirement, you switch to the expense method of calculating retirement. People get used to a lifestyle at some point.”

Inflation can have an erosive impact on retirement over time, say experts. But it doesn’t affect everyone the same way, considering that inflation for different expenses varies and everyone’s spending choices are different.

While medical care costs, a factor of great importance to retirees, have been going up at a higher rate compared with other costs, Blanchett actually finds that retirees are not hiking up their withdrawals annually to account for this higher level of inflation.

“Even though things like health care become a larger share of expenditures, the individual doesn’t spend as much on clothes, on education, doesn’t do the things that cost money,” he says. “And that’s kind of a natural hedge.”

Blanchett finds that retiree expenses actually go down in retirement in what he describes as a “retirement spending smile” and then move up a bit in later years. However, expenses end up ultimately lower after adjusting for inflation.

In the cases of a few households that have high spending levels and haven’t accumulated much wealth, the reduction in spending likely comes about as they realize they can’t sustain their spending. However, for others, it appears to be more voluntary as their spending patterns change and they don’t feel the need for things such as new clothes or a new car.

This finding resonates with Richard Rosso, a senior financial adviser with Clarity Financial in Houston. He says he has clients who haven’t adjusted their withdrawal rates up for a number of years.

However, some people do have a weakness in their budget, says Rosso. “I have clients that have two or three pets and I have seen the pet care part of their budget actually increase,” he says. “That’s a little unique, but everyone has a specific inflation pitfall that you need to compensate for.”

How about the assumption that you have to plan for 30 years of retirement? This, too, should be personalized.

Of course, it’s always better to have too much money in retirement than not enough. But if you are denying yourself life’s pleasures in your quest to maximize retirement savings, you might want to rethink your priorities.