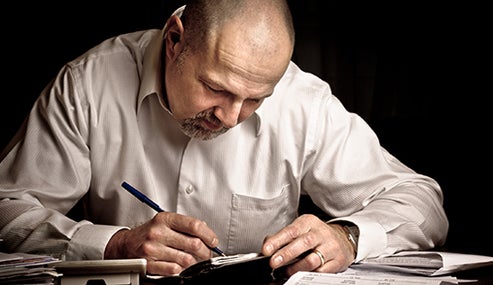 You may have big dreams for your retirement: sailing around the world, starting a new business, spoiling the grandkids.

But if you’re piling up more debt than savings, those retirement dreams may have to be deferred.

It turns out the majority of people who contribute to retirement plans, such as 401(k)s or 403(b)s, accumulated more debt than retirement savings in recent years, according to a study by HelloWallet.

What’s more troubling is that those approaching retirement — between 50 and 65 years old — had a monthly debt obligation in 2010 equivalent to 22 percent of their earnings, up 69 percent from 1992, according to the analysis. The typical worker in this age range has saved enough to replace just two years of working income, though the median post-retirement life span is about 17 years.

“These are the folks that you would expect to be deleveraging, paying off debt and saving for retirement, yet the research showed a very different reality,” says Elisabeth Lesser, brand marketing manager at HelloWallet.

Another study by the Center for Retirement Research at Boston College found that the proportion of people in their 60s with debt rose from just under half in 1998 to nearly two-thirds in 2010. And their debt as a percentage of assets nearly doubled, from 10 percent to 18 percent over that time frame.

Mortgages account for the largest portion of that debt, according to CRR. Older Americans are not only more likely to have mortgages than in previous years, they also are taking longer to pay them off.

Marc Henn, president of Harvest Financial Advisors in Cincinnati and West Chester, Ohio, says mortgages are the main source of debt among his clients who are approaching retirement. Henn says some homeowners enjoy low enough mortgage interest rates and large enough investment assets to feel comfortable tapping a home equity line of credit to pay for an emergency expense. But in some cases, a reliance on home equity isn’t such a good idea.

“A lot of financial institutions encouraged homeowners to look at their house almost like a cash machine with these low interest rates, to pull money out and do other things with it,” Henn says. “I think it’s not a good strategy to do that. A lot of baby boomers, especially, did that, and now they are stuck with a higher mortgage.”

On the other hand, if you’re already retired, borrowing money for certain expenses like a new car or home repairs may be preferable in some cases to withdrawing the money from your retirement plan, a move that could incur a tax penalty, says Jennifer Lane, a Certified Financial Planner with Compass Planning Associates in Boston. A loan is also less likely to interfere with any income-eligible perks a retiree might enjoy, she says.

“Some people’s rent is based on their income, so they have to be careful about what their income is in any one particular year,” Lane says.

To keep debt from derailing your retirement plans, Henn recommends consulting with a financial adviser to draw up a plan for managing your post-retirement cash flow.

“Most people in retirement are going to have more fixed-income sources, whether they are Social Security, pension plans or what have you,” Henn says. “We need to make sure that with those fixed-income streams you have the ability to pay the debt.”

When it comes to balancing debt management with saving for retirement, Lane says, “I think it starts with carefully measuring what your income and expenses are. I talk to many people who just don’t do that.”

Lane’s advice: Examine whether you are living beyond your means. If you decide you need to pay down your debt in lieu of increasing your retirement savings for the time being, make sure you don’t end up in the same position by running up more debt.

The authors of the HelloWallet study recommend that employers offer more “holistic” guidance to employees participating in their retirement programs.

Instead, employers should also offer counseling to workers who need help with day-to-day budgeting and financial planning, she says.

But you don’t have to wait for a workplace coach to get started on a pre-retirement game plan to spend less and lower your debt. Reduce your financial outlays now, and you’ll have more money later to live the retirement lifestyle you want.