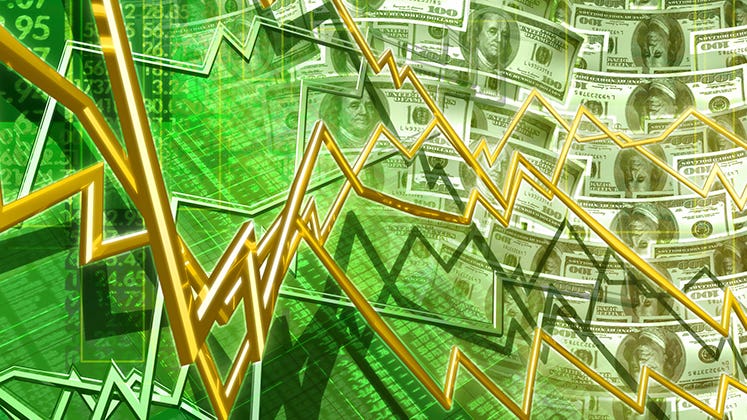 When stock market prices gyrate, heading in a downward spiral, it can be tempting to abandon the whole retirement savings thing. But quitting when you’re down is exactly the wrong knee-jerk reaction. In fact, that may be the best time to start saving even more money.

How much are you saving, anyway?

Stock markets move in cycles — sometimes they scale mountains and other times they fall off a cliff.

Most retirement savings plans start with the premise that you’ll get some sort of return on your money. The rate at which you save is based on the assumption that you’ll get a minimum rate of return that, when combined with your rate of savings, will help you reach your retirement goals.

But how do you figure out the rate at which you need to save? Should it be 10% of yearly pay, 12% or even 17%? And what if you don’t get your minimum rate of return for years at a time?

He looked at the rates at which a hypothetical person would have had to save during various historical time periods. For instance, he examined what someone should have saved through the stock market crash in 1929 and the Great Depression; the stagflation era of the 1970s; and the past couple of decades, which saw 2 two major stock market booms and busts.

“The safe savings rate … is the maximum of all the minimum necessary savings rates from overlapping historical periods needed to build up enough wealth so that you can afford your desired retirement expenses,” Pfau writes on his RetirementResearcher.com blog.

His research reveals that the safe savings rate for all time periods was 16.62%, assuming a 30-year savings period and a 30-year retirement. So to conform to his thesis, it’s a safe bet to save at least 16.62%.

“The safe savings rate is assuming you ignore the market; it’s a set-and-forget plan,” Pfau says.

The lowest necessary savings rate he discovered was 11.2% for people leaving work between 1946 and 1949.

You could probably save more

There is a strong argument to be made for saving even more when the market heads south.

“Certainly if you have reasonable expectations that market returns will be lower in the future, you need to save more and assume a lower spending rate,” says Pfau.

But a second argument favors buying stocks when prices are lower because, essentially, you’re buying them on sale.

“If people bought their stocks the same way they bought their socks, we’d all be better investors. But they don’t do it,” says Joe Goldberg, director of retirement plan services at Buckingham Asset Management in St. Louis.

“What we tend to see when markets take a dip, (people) say, ‘I should stop contributing because my account is going down by more than I’m putting in,'” he says.

It can feel like throwing good money after bad, but it’s not if you’re investing in mutual funds or companies you strongly believe will recover. In that case, buying more at a lower price just makes sense.

“They should be putting more in,” says Goldberg. “At low prices, expected returns are higher.”