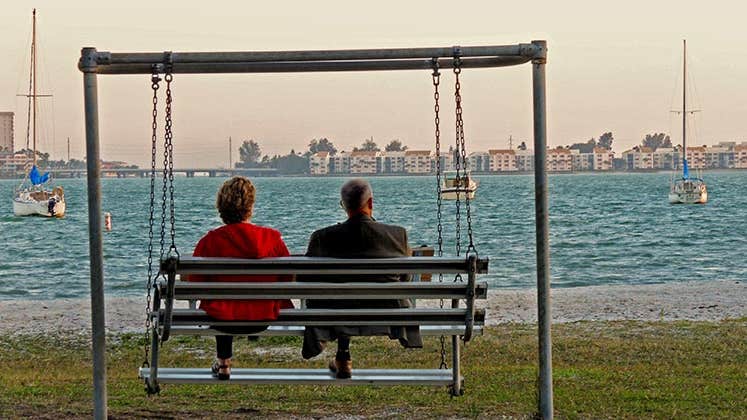 Particularly for those living in so-called battleground states, the idea of retiring somewhere that’s less politically engaged probably sounds pretty nice right now. To help those feeling a little burned out at this point in the election cycle, we incorporated data on political engagement into our rankings of the best states to retire to give prospective retirees some places where they might be able to get away from it all.

We started by excluding states categorized as swing states by Politico, since these areas receive the biggest share of annoying political advertising and disruptive campaign stops by candidates.

From there, we looked at 2 main factors to determine how politically engaged a state is: how much it contributes to national political campaigns; and voter turnout. Our reasoning was, if people in a state aren’t targeted by swing-state advertising, donating much to campaigns or showing up to vote, it would be a pretty good place to escape national politics.

Shop Bankrate for the best rates on high-yield CDs.

Where we got our data

On campaign contributions, we turned to the Federal Election Commission for total contributions made by states’ residents for presidential, senate and congressional campaigns so far in this election cycle. From there, U.S. Census Bureau population estimates for the states and a little math yielded campaign contributions per capita, the metric we ultimately used.

For voter turnout, we used the percentage of states’ voting age populations that voted for the office of president in the 2012 election, according to the United States Election Project, run by University of Florida associate political science professor and Brookings Senior Fellow Michael McDonald.

How we did our analysis

Because there are, of course, many different factors that should go into your choice of retirement destination beyond a desire not to be bothered by politicking, we took the score we came up with based on a state’s political engagement and balanced it with the rest of the data we use to find good states for retirees: data on things like cost of living, tax rates and weather. For more information on the sources for that data, check out our Best and Worst States to Retire methodology.

So as not to put our thumb on the scales, we gave our political engagement score a neutral weighting, as opposed to the weighting on the other factors, which were guided by a 2015 national poll we conducted.

That process yielded 10 states that combine some of the best features for retirees while remaining relatively insulated from the cacophony of modern American elections. To see them all, check out “Best states to retire in if you’re sick of politics.”