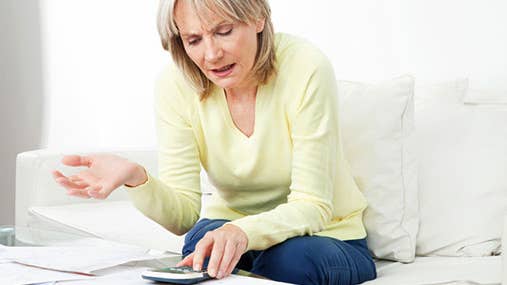 Doris Adams, a retired steelworker in Xenia, Ohio, knows she is luckier than most. Still, she worries about a plan to change the way Social Security checks are calculated.

Her monthly check of $1,115.60 is only about a third of her income, thanks to a short-term county job and pensions for herself and her late husband, both of whom worked at a General Motors parts plant. But there’s a mortgage on her modest ranch house, a washing machine to repair, windows to replace and other expenses.

“I have it better than a lot of people, and it’s a struggle for me. I am living from check to check,” she says. “I don’t want to take up bank robbing with a bottle of Geritol and a walker. I am not going to be reduced to eating cat food.”

The proposal that has her riled up is called the chained consumer price index. President Barack Obama’s budget proposes a series of budget-cutting measures, including one to change the way cost-of-living formulas are created. Many economists believe the current CPI overstates inflation. The chained CPI would factor in that consumers switch to cheaper goods when prices go up.

Under the new formula, Social Security checks would still go up when there’s inflation — just not by as much. Official estimates say the difference will be between 0.25 percent and 0.3 percent each year.

Romina Boccia, assistant director of the Roe Institute for Economic Policy Studies at The Heritage Foundation, says that amounts to only a few dollars a month. And it’s not a cut from current Social Security checks, it’s just a slower increase each year.

“It’s the price of a Starbucks latte in any given month,” she says.

Is the nation’s inflation measure inflated?

Boccia doesn’t see why wealthy seniors need to keep benefiting from what many economists believe is an exaggerated inflation measure. And making the change will help prolong the life of the Social Security trust fund, which is a paper calculation of how much more Social Security has taken in than paid out. By 2033, that credit with the federal government will run out and payroll taxes will be able to cover only about 75 percent of the benefits for recipients. That’s a real cut, Boccia says, that could be partly avoided by the chained CPI.

The change reduces the deficit by $130 billion over 10 years, as well as another $100 billion when it is applied to income tax brackets.

But Adams doesn’t understand why Social Security should be tapped to help solve a deficit problem it didn’t create. “Whoever came up with that formula, I just want to smack ’em. I don’t know of anybody living large on Social Security. My trips to the Riviera are zip.”

Adams has other income. But 9 million Americans rely on Social Security for 90 percent or more of their family income, according to AARP.

Advocates for the elderly, like the National Committee to Preserve Social Security and Medicare, say one problem with the chained CPI is that it compounds over time. Adams, for instance, would get only a few dollars a month less during the first year. But after 10 years, her Social Security payments would be $2,130 less annually.

Obama’s proposal would give the oldest recipients a “bump” after 10 years of about $800 a year. The first bump would phase in starting at age 76, then another at 95.

Even with the bump, an average recipient wouldn’t be receiving as much as they would have under the old CPI in current dollars until about age 104, according to Joan Entmacher, vice president for family economic security at the National Women’s Law Center. The median monthly Social Security check for a 65-year-old woman is about $1,100.

A hypothetical woman turning 65 in the year 2015 — when the chained CPI would begin — would get $41 a month less in current dollars than under the old formula by the time she’s 75, Entmacher says. And that’s not money she would be spending on lattes, it’s about five days’ worth of food for someone on a modest income, she says.

The other knock against the chained CPI is that the current formula already is short-changing seniors. Entmacher and others say seniors spend more of their income on health care costs, which tend to rise faster than inflation. And they are on fixed incomes with less opportunity to make the sort of substitutions to cheaper alternatives that the chained CPI assumes.

“You can’t say, ‘Oh I’ll have a hernia operation instead of triple bypass because it’s cheaper.’ We’re not talking about people who have enough money to debate whether they are going to buy steak or hamburger or chicken. We’re talking about people saying, ‘Do I need to cut my pills in half?’ They’re already down to basics.”

Congress will settle the debate during fiscal negotiations. Obama’s fellow Democrats have been cool to the chained CPI. But Republicans have embraced it as a step toward putting Social Security on more solid footing and to getting the federal budget deficit under control.

Passing it likely would involve a larger deficit-reduction deal between the two parties and the White House involving spending levels, taxes and benefits. And that’s a formula even more complicated than any consumer price index.