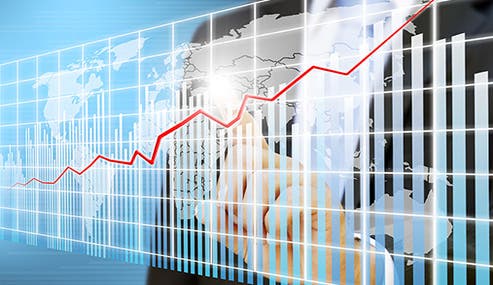 In the aftermath of the 2008 financial crisis, the pace of economic recovery has been frustratingly modest. And it’s likely to stay that way, according to a Bankrate survey of two dozen of the nation’s top economists.

The red line on the left shows the movement of the unemployment rate over the previous 12 months, and the blue boxes on the right indicate the predictions of the economists in the survey for where the jobless rate will be in one year. The size of each box reflects the popularity of that response among the economists.

This first-ever quarterly survey by Bankrate finds that the experts generally expect the unemployment rate to fall over the next year, but the panel also looks for meager hiring during the same period, with fewer than 200,000 jobs created per month, on average.

That’s still steady improvement. So, the economists say the financial markets will begin to anticipate an interest rate increase next year by the Federal Reserve.

Almost all of the economists responding to the survey expect the unemployment rate to fall from January’s level of 6.6 percent. On average, they expect a jobless rate of 6.2 percent 12 months from now.

Michael Fratantoni, chief economist for the Mortgage Bankers Association, says the jobless rate will fall because of “better economic growth, but also low labor force participation.” In other words, some of the unemployed will give up the search for work, giving the distorted appearance of a falling unemployment rate.

Nearly three-quarters of the experts think the unemployment rate will be between 6 percent and 6.3 percent one year from now, flirting with levels not seen since before the crisis.

Rising rates: Not if, but when

When the Federal Reserve meets this month for the first time under the leadership of Chair Janet Yellen, officials will provide updated guidance about when they expect to boost short-term interest rates for the first time since the recession. More than half of the economists said the first rate increase will happen in 2015.

“The economy should show enough momentum for the Fed to follow through after its ending of asset purchases to more towards a more ‘normal’ federal funds rate, between 3 and 4 percent,” says Lynn Reaser, chief economist at Point Loma Nazarene University in San Diego. The Fed’s benchmark interest rate currently stands at 0.25 percent.

James Angel, a visiting associate professor at the Wharton School of the University of Pennsylvania, also looks for the Fed to move next year. “When the unemployment rate hits 6 percent, they will declare ‘Mission Accomplished,'” he says.

Amid recent setbacks, the Fed will likely have to wait until late 2015, predicts Alan MacEachin, corporate economist for Navy Federal Credit Union. “The economy appears to be slowing during the first quarter due to weather and other factors,” he notes.

The remainder of the panel was nearly evenly split between those who expect a rate increase this year and those who say it could happen as late as 2016.

David Nice, associate economist with Mesirow Financial, is in the 2016 camp. “Based on their recent statements, we believe they will remain accommodative past their previously stated thresholds for the unemployment rate,” says Nice, meaning it may take more than joblessness below 6.5 percent. He looks for the first increase in the first quarter of 2016.

Those who say the Fed could raise rates as early as this year include Ken Simonson, the chief economist for the Associated General Contractors of America. He forecasts an unemployment rate staying below 6 percent and solid monthly job gains, factors he says “will suggest the economy doesn’t need artificially low rates anymore.”

If the Fed does boost rates next year as most expect, the financial markets also will be anticipating the central bank’s moves. The economists look for a rising yield on the benchmark 10-year Treasury note. On average, those surveyed expect that yield to surge to nearly 3.4 percent one year from now, up from about 2.7 percent seen recently.

While central bankers fret about the risk of abnormally low inflation, the economists surveyed are expecting a modest rise in prices over the next year. “Rents are rising, and energy prices could also rise,” notes Lawrence Yun, chief economist for the National Association of Realtors.

On average, the experts look for a 2.1 increase in the Consumer Price Index over the course of the next year. That’s compared with just a 1.6 percent increase in retail prices during the 12 months that ended in January.

Prices are being pressured by “stronger domestic and global demand,” according to John Silvia, the chief economist for Wells Fargo.

As for the core rate of inflation — excluding food and energy — the panel expects relatively little change from the recent pace.

The economists tended to diverge most in their responses when asked to identify the single biggest economic headwind of 2014.

A handful pointed to economic challenges related to the Affordable Care Act, also known as Obamacare, or the Washington political scene. Others cited possible pressures related to the Federal Reserve’s actions, including the current slowing of its monthly asset purchases.

Bob McTeer, the former president of the Federal Reserve Bank of Dallas, is among those concerned about Obamacare. “Higher (health insurance) premiums will reduce discretionary spending, says McTeer, now a distinguished fellow at the National Center for Policy Analysis.

“Obamacare,” says W. Michael Cox, a professor at Southern Methodist University’s Cox School of Business, “is fanning the fire of an already enormous political rift in America, one that’s very harmful to long-term progress and growth.”

Simonson is concerned about broader federal government impacts. He cites worries associated with “congressional inaction or delay on key legislation: debt ceiling, appropriations, highway reauthorization.” He says all of that could “cause businesses to delay investments.”

Those who anticipate some tension as the Fed backs off its stimulus include Mark Zandi, chief economist for Moody’s Analytics.

The possible headwind he envisions? “The Federal Reserve mishandling QE tapering (winding down its asset purchases) leads to an interest rate spike and financial market turmoil,” he writes.

Still, Zandi is relatively bullish about the outlook. He expects housing to drive a stronger economy, with unemployment falling below 6 percent next year.

Three of the responding experts expressed concerns about financial stresses migrating from overseas. William Poole, former president of the Federal Reserve Bank of St. Louis, is worried about China. “Its financial system is increasingly risky,” writes Poole, currently serving as a senior fellow for the Cato Institute, a Washington-based think tank.

4 things to learn from the survey

Conclusions to draw from the survey:

For those managing debt: